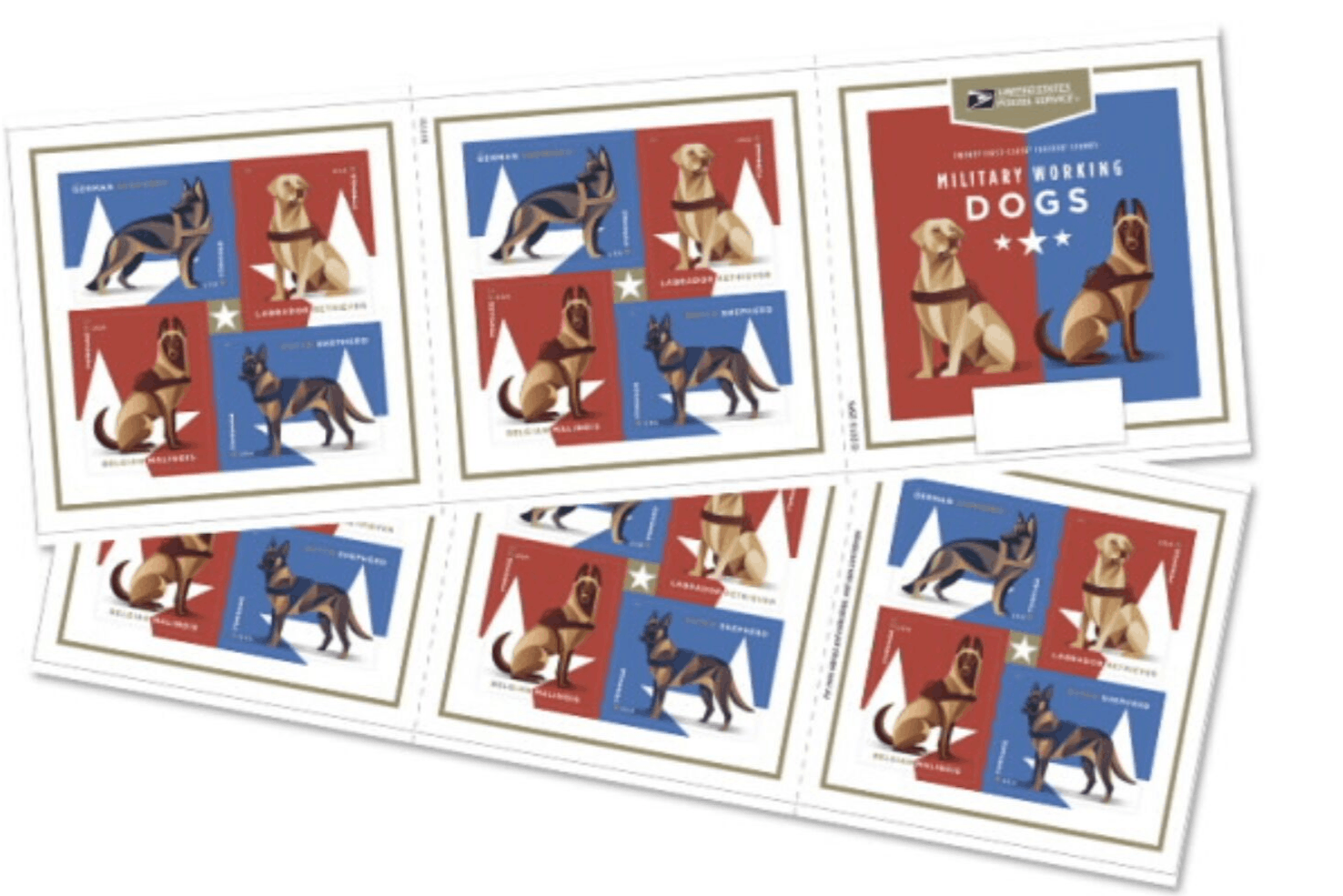 One particular set of the U.S. Postal Service’s latest stamps have earned our stamp of approval. We think you’ll love them, too. Why? They feature dogs — military working dogs, to be specific.

The stamps, issued August 1, 2019, pay tribute and bring awareness to some of the bravest canines in the world. From World War I until now, dogs have fought alongside our military heroes in the U. S. Armed Forces. (Even before WWI, dogs played roles, in a less organized fashion, in many battles, including in the U.S. Civil War.)

Given such a history, the Postal Service decided these courageous canines, often referred to as “war dogs,” deserved their own stamps. After all, these dogs are on the front lines, protecting our soldiers and our country. They rush out onto the battlefield with medical aid for wounded soldiers, perform search-and-rescue operations, find those lost during combat, and do so much more.

What makes military dogs a cut above?

A closer look at military working dogs helps us better understand their importance in battle.

Most of the military dogs that assisted American soldiers in World War I were actually French-trained dogs, according to the United States War Dogs Association. The United States saw the value these canine troops brought to the battlefield, but we didn't supply our own because military leaders believed the war would end before American dogs could be trained for battle.

Sgt. Stubby is a WWI exception, smuggled into service after befriending U.S. soldiers before they deployed for France. The tenacious terrier served for 18 months with his regiment, the 102nd Infantry. In addition to lifting morale, he provided early warning about gas attacks and ferreted out a German spy in hiding. His heroics are captured in this Connecticut Military Department article. The American Red Cross, YMCA, and American Legion made Stubby an honorary member and after the war, he became the mascot at Georgetown University.

Dogs serve many roles in the U.S. military

Dogs have a great sense of smell. They’re also loyal and bright (as we’re sure you know). This makes them perfect for a wide range of military jobs, which include:

Scouts: Using sign language, scouts are trained to sniff out and spot snipers. They also give warning of ambushes and can work without making a sound.

Explosive Detectors: These dogs identify a wide range of chemicals used to make explosives. When the dogs catch scent of one of the chemicals, they signal to their humans, protecting them from mines and other explosive threats.

Search-and-Rescue: Locating lost soldiers can be a dangerous task. Luckily S-A-R dogs can pick up a lost soldier’s scent trail, find him, and help return the soldier to safety.

Casualty Dogs: These brave dogs help bring home the men and women injured or killed in battle. At times, casualty dogs arrive in time to save the lives of wounded soldiers.

A dog was part of the Osama Bin Laden raid

The Navy SEALs train dogs to give them even more of a tactical edge. The dogs that assist in SEAL operations might wear waterproof tactical vests with night vision cameras. These help their handlers see what the dogs see! Cairo, a Belgian malinois, helped secure the area surrounding compound where Osama bin Laden compound was found, making it safe for troops to enter.

Gone are the days when the armed forces viewed military working dogs as equipment. These dogs have worked hard to prove themselves. In 2000, Congress passed a law to ensure that all eligible military dogs are available for adoption. Most of the time, understandably, their handlers decide to adopt them.

Other USPS stamps of honorable dogs

What other dogs have earned the honor of being featured on a USPS stamp? Owney, for one. He was a mutt who stationed himself at the Albany, New York, post office in the 1880s. His owner was likely a postal clerk who let the dog walk him to work. Owney began to ride with mailbags on postal train cars across the state — and then the country! The Postal Service commemorated him with his own stamp in 2011.

In 2012, the USPS issued a Dogs at Work series depicting involved in a variety of activities. The stamps included a guide dog assisting a blind woman, a military dog scouting and track­ing, a therapy dog visiting an elderly woman in her home, and a search and rescue dog in the field.

Given the affection so many of us have for our four-legged friends, it's a safe bet the Postal Service will find other dogs to honor with stamps, which will then become collector's items for stamp and dog lovers alike.