Hi I'm Will! I walk dogs full-time and it's great! I've walked and sat dogs of all breeds and types from 18 years to 2 months, from South African mastiffs to Yorkies and everything in between. Active and energetic dogs are my favorite to walk, and I've met so many repeat clients here in New Orleans. If you have any questions or concerns please reach out to me, I look forward to providing puptastic service!

My name is Desiree. I am a mother of two teenage boys and a loving pet owner for many years. I have a Weimaraner who is almost 14 years old. He has been a part of our family since he was a baby. I look forward to meeting your pup!

Hi! My name is Matt and I can’t wait to meet your furry friend! I grew up in Pittsburgh and was lucky enough to have several dogs throughout my life. I volunteered at Furry Friends No Kill Animal Shelter where I discovered my passion for animals. Now I live in Kenner with my wife and our Bichon Frise, Brennan. I love to be active and am looking forward to spending time in the company of some great dogs!

Hi, my name is Rachel! I love animals and the outdoors. I've worked with many different breeds and sizes of dogs in a veterinary and kennel setting, so I'm comfortable handling most any dog. I've also raised and trained Destro, a Jack Russell Terrier, so I know how important it is to you that your buddy is getting the quality of care he or she deserves. I want to treat your dog as though they're just as special as my own.

As a young college student I started pet sitting for my neighbors. I was pet sitting for 10 years already when a dear friend started a pet sitting service on the north shore; he asked me if I’d be interested in working for his sitting service, and I was thrilled. I began working as a professional pet sitter in 2002 and I can’t remember a more rewarding job. It's an honor to have been gifted with a career in pet sitting. I absolutely love caring for pets; they always have a special way of making each day more memorable.

“I’ve walked and caredfor over 500 dogs as a walker”

Ive spent most of my life caring for dogs. My first dog was a boxer that I had for 15 years. I used to also breed Neapolitan Mastiffs with my brother who is a dog trainer and competes in dog shows. They are huge dogs and a lot of responsibility which taught me patience and love for dogs. I’ve spent the last 2 years in New York walking and caring for over 500 different dogs. I’ve trained puppies and older dogs. I look forward to walking your dog and can assure you he is in good hands. Thank you!

Hi! I'm Jake, avid dog lover and owner since childhood. Grew up in a house that had a Rottweiler mix, followed by labs that we loved so much that we bred them. The first pup was my first dog that I owned. I now own a 4 year old Husky mix that I rescued and take care of my parents' Rottweiler and their Chihuahua mix when they're away. Love all dogs.

“All of the love”

Hey there! My name is Trevor and I've been surrounded by dogs my entire life. I've been professionally walking dogs of all sorts for 3+ years and I heavily value kindness / positive reinforcement in my interactions with them. Trust me, your pups are in attentive & caring hands! (:

Greetings! I have experience in both petsitting and volunteering with animals. I have cared for all types of dogs, ranging from a Great Danes to a Chiweenie. I've helped raise a St. Bernard mix at my parents' home as well. I have helped clean cages for a feline shelter. I would love to be able to work with your loving pets soon!

Hi! I have loved animals my whole life and have been walking dogs and spending time with cats since I was young. I have professionally walked dogs on and off over the past ten years or so, in oakland and now finally back in new orleans! I've also volunteered at kennels and have had jobs dog-sitting for friends throughout the years.

Arabi, Louisiana is a resilient community. It is self-reliant. It is productive. Originally, it was created because the slaughterhouses were not allowed inside New Orleans city limits. It was considered a health hazard. However, it then became a gambling community that was thought to be dangerous. In 1952, armed soldiers went in and closed down all the gambling establishments. It was a fight, but the community banded together to clean up its home. Then when Katrina hit, Arabi was twenty feet underwater. Nothing was thought to survive. Yet, when the water receded, there were some historic buildings left standing.

The River House is one such building. It is a three-bedroom home that has been declared a historic site. You can often find live venues that will allow you and your pup to enjoy some authentic jazz music and classic Cajun fare. The food is always spicy and the music is always jumping. You can rent the rooms, but they are often booked a year in advance!

Patricia Park is a more modern addition. It is a great place to walk your dog while the kids play. The locals often throw together impromptu baseball games. Please keep your dog on the leash and make sure you visit the historic, unnamed building on-site. 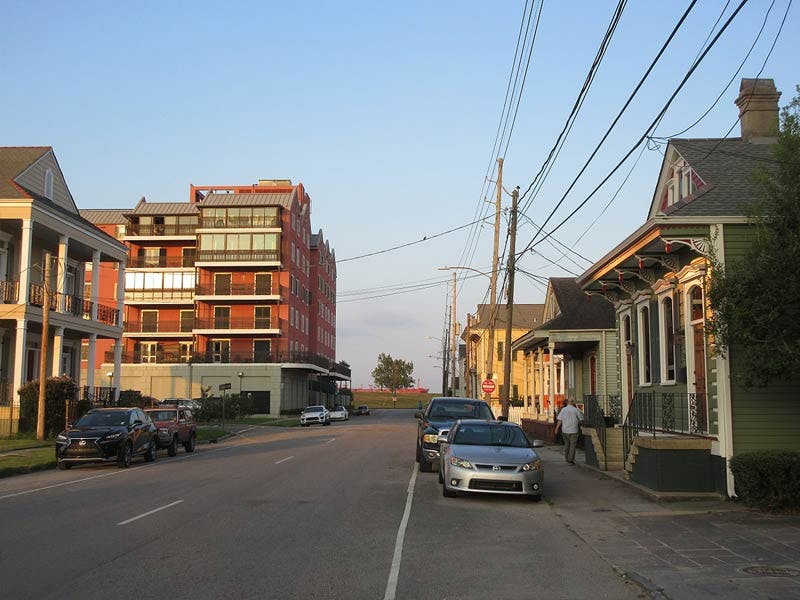 A ride on the Algiers Ferry is a great start for any adventure. You and your dog can catch a ride on the lower deck and head on over to Algiers Point. Your dog will probably be caught off guard by the ground moving under them, but once they get the hang of it, they will love the new smells! Once you get to Algiers Point, there is a small pub that is dog-friendly if you want to get a drink while you wait for the ferry to depart again. You will need a leash. Dogs travel for free but people pay a dollar. 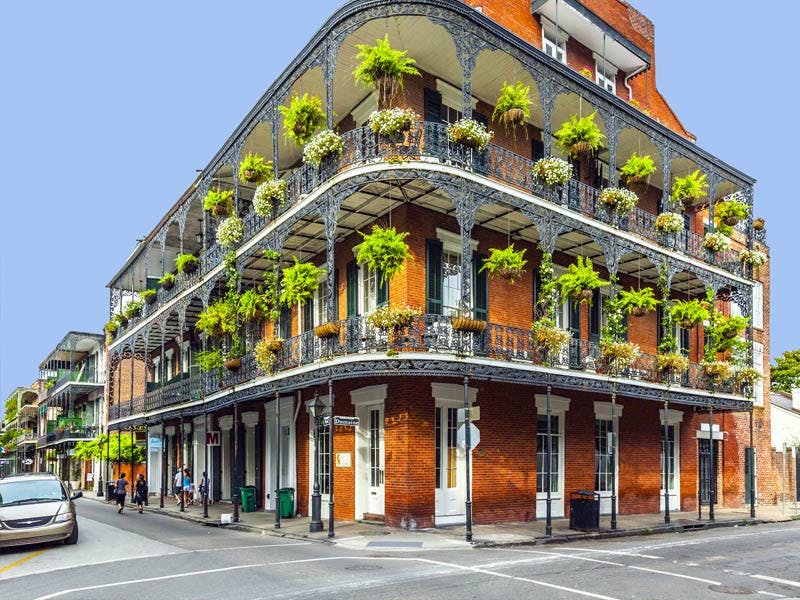 Ghost City Tours has many options for you and your pup to enjoy. You can do a family-friendly tour or take a late night, adults only terrifying tour. There are tours through the city and through the cemeteries. You get to choose your own adventure with your dog! You are required to keep your dog on a leash while you go, but that is so you don't get scared while watching for ghosts. Just train him beforehand to stare off into space and growl to freak out the others on the tour. This is a great alternative to exercising at the dog park!

You think you love bacon, but you don't know how much until you try the Baconzilla Burger at Rally's Hamburgers. You will get your fill of bacon here -- maybe. You could also get a classic burger, hot dogs, or even a chicken sandwich if you prefer. You can bring your dog with you if you want to share a burger with him. They also have shakes, slushies, or ice cream for desert. While you are here, plase keep your pup on a leash and don't forget to bring his water dish with you. 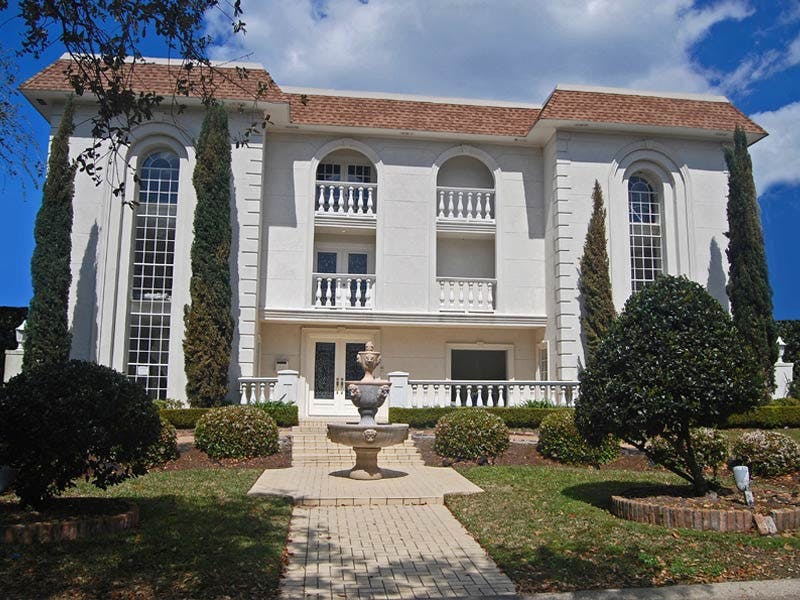 Metairie Cemetery is miles and miles of trails, walkways, and roads that you and your dog can walk. Some locals say that this is the cemetery that inspired the local vampire lore. Some graves are as old as the early 1900s. The cemetery is open during the day all year long, but you can get seasonal night tours if you are up for a little bit of a scare. Please remember to clean up after your dog while you are here. This cemetery is about ten miles from Arabi. 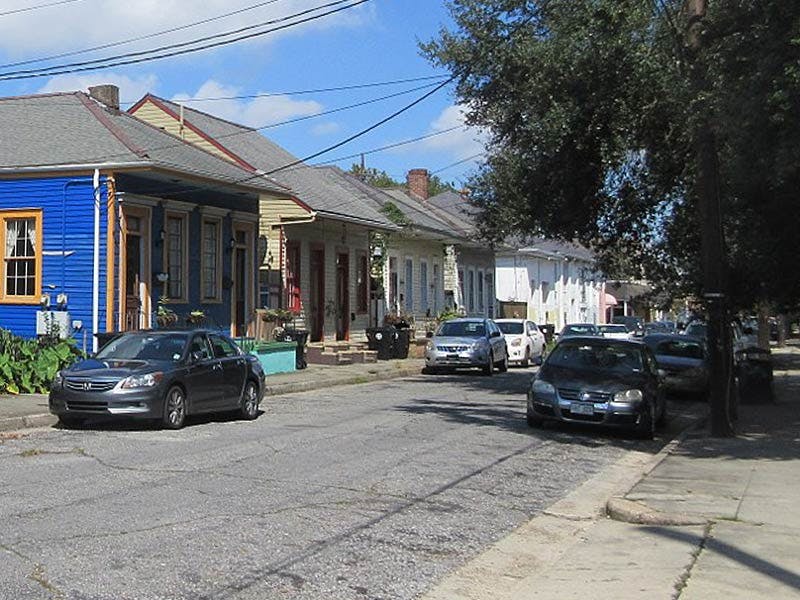 You can't visit the south and skip the BBQ. If you are in the area, then you simply must check out The Joint. You and your dog will be greeted with water at an outdoor table. You can get pulled pork, ribs, or even some chicken. This is where you'll find slow cooked, fall off the bone, melt in your mouth BBQ that just isn't the same anywhere else. All of the sides are made fresh on site every day, so grab you a full plate and don't forget to share with your dog!