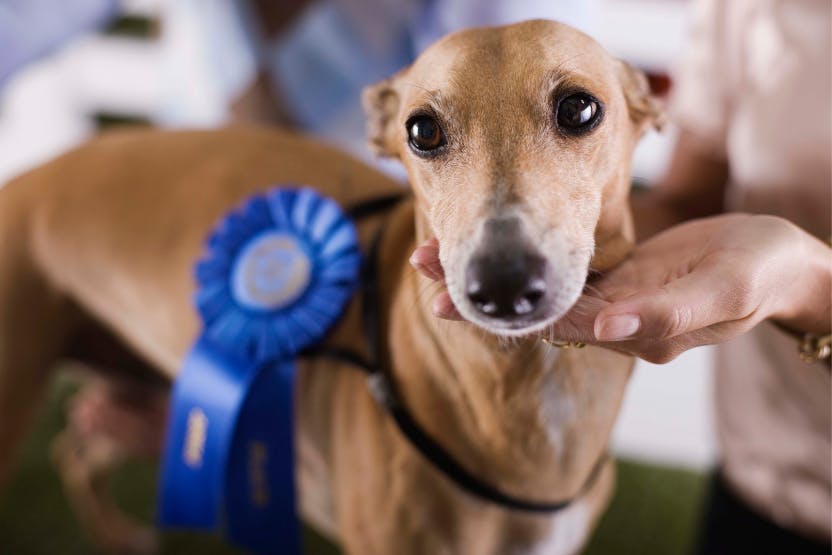 After being canceled in 2021 due to COVID-19, Crufts bounced back with a bark this year! To celebrate its long-awaited return, we've sniffed out some fun (and not-so-fun) facts about the world's most sensational canine competition.

Crufts is the biggest dog show in the world

American pet parents who aren't up to speed on their international dog show knowledge might think Westminster is the one dog show to rule them all. But Crufts is actually the largest dog show in the world. In 2022, more than 16,000 dogs from all across the globe strutted their stuff on the Crufts green. Meanwhile, Westminster welcomed just over 2,500 dogs competing for Best in Show in 2021.

Afterglow Agent Orange, Minarets Best Kept Secret, Almanza Backseat Driver — these are just 3 of the 16,000+ canines who competed at Crufts this year. But you won't hear handlers or judges using these long-winded, wacky names!

The registered name is often chosen by the breeder and registered with the relevant kennel club. Many breeders of show-quality dogs also pay a fee to include their kennel name in their puppies' registered names.

The call name is what the dog is called in everyday life — for example, Afterglow Agent Orange's call name is "Waffle". Cute! Check out this "furbulous" doggy diva (who was reserve winner of Best in Show) in the video below!

Crossbreeds can also compete at "Scruffts"

Conformation dog shows are all about the purebred pups, which has caused a lot of controversy in recent years. (But more on that later.) Scruffts gives the mutts and mixed breeds a chance to shine — no pedigrees allowed!

Scruffts competitors can go tail to tail for the top spot at qualifying events, called heats, throughout the UK. At these heats, crossbreeds can compete for an array of titles, like Most Handsome Crossbreed and Child's Best Friend.

Competitors for Most Handsome Crossbreed are judged on their character, health, and temperament instead of a breed standard. Meanwhile, dogs competing in the Child's Best Friend category are handled by children aged between 6 and 16 years. Adorable!

The winners of each heat are eligible to compete for the title of Family Crossbreed Dog of the Year in the final, held at Crufts. The entry fee to compete in a heat is just £2 ($2.73 at the time of writing). Every cent of this nominal fee goes to The Kennel Club Charitable Trust.

Each year, Crufts hosts a special event honoring working dogs. Previously called the Friends for Life event, the Kennel Club Dog Hero Award ceremony allows dog lovers to watch spectacular performances from police dogs, military dogs, and medical detection dogs. To give you an idea of what these special shows involve, we've dug up a few heartwarming stories from recent winners and nominees!

A paramedic and his suicide prevention dogs: 2022 winner

With the help of 4 floofy Newfoundlands, paramedic Pete Lewin rescues the people of the East Midlands from both mental and physical ailments. Pete's nonprofit organization provides emotional support to front-line healthcare workers, active and retired military, and anyone else who might benefit. Group swims with the dogs in open water give attendees a chance to connect with nature and release stress.

Although the Newfoundlands are trained in search-and-rescue, Pete says, "We were never, ever going to get used for real rescue in this country, unfortunately. And I'd sort of develop different maneuvers for getting people out of the water. But these moves are not just for real rescue. These are great for emotional support."

Bob, Storm, Sonar, and Walker comprise the organization's K9 unit. Bob is a "non-swimmer", according to Pete, and instead serves as the organization's mascot. Storm is needy, while Sonar will "swim his heart out for you". Walker was a gift from the American Foundation for the Prevention of Suicide.

"There's three people around that would tell you that they're here today because of swimming with these [dogs], which is an amazing, amazing thing."

Learn more about Pete and his noble Newfies in the video above. (But we advise grabbing some tissues first!)

In 2018, a West Midlands police officer named Louise McMullen and her K9 partner in fighting crime, Wolfie, were tailing armed robbers when they crashed into a tree, causing the squad car to catch fire.

"As I was crawling out of the car, my only concern was that I had to get the dog out of the back of the vehicle," recalled a teary-eyed Officer McMullen in her Crufts finalist video.

Not only did Officer McMullen brave the blaze to rescue her partner, but she did so while suffering from neck damage, a broken jaw, and a fractured eye socket!

Before the crash, Officer McMullen had been battling health issues that threatened to end her career. In 2013, doctors told her she would never be a dog handler again due to Chronic Fatigue Syndrome. The disease forced her to spend 4 months in a hospital bed and 2 years out of work.

"I wasn't going to listen to that," remarked Officer McMullen, "because I'm quite stubborn and was adamant that I was going to get back."

And get back she did. With the help of her squad, Officer McMullen became a full-time dog handler once again. She immediately hit it off with Wolfie and returned to the field within 2 weeks of training.

In 2020, the pair took the stage at Crufts as finalists for the Friends for Life Award. Wolfie demonstrated his speed and caught up with a "suspect" in seconds.

Watch the video above to learn more about Officer McMullen's special bond with Wolfie.

Now for the not-so-fun fact about Crufts (and conformation shows in general). Throughout history, breeders have used inhumane techniques — like inbreeding and narrowing the gene pool — to maintain the breed standards set by kennel clubs around the world.

Crufts came under fire in 2009 after the BBC aired a documentary series titled Pedigree Dogs: Exposed. The documentary found that The Kennel Club promoted bad health in canine competitors by allowing dogs with breed-related diseases and deformities to compete. The Kennel Club was also criticized for upholding breed standards and judging practices that permitted these harmful breeding techniques.

Shortly after the documentary aired, major sponsors like the Dogs Trust and the Royal Society for the Prevention of Cruelty to Animals (RSPCA) revoked their sponsorship of Crufts. The BBC dropped Crufts from its coverage schedule after more than 40 years.

After undergoing an independent review by the RSPCA in 2009, The Kennel Club revised its breed standards and judging practices and implemented a new health plan.

Despite these improvements, many animal rights groups, like the RSPCA, still don't support Crufts or The Kennel Club. In an article on the RSPCA website, veterinarian Dr. Michael Lazaris praised The Kennel Club's recent health measures while also acknowledging the dark aftermath of the show:

"[Crufts] often creates a buzz around certain breeds, which can drive up their demand by the public. This can lead to irresponsible and unregulated breeders cashing in without giving two hoots about the dogs' welfare and all the genetic conditions they could be promoting."

Keen to learn more about dog shows? Check out our related guides: