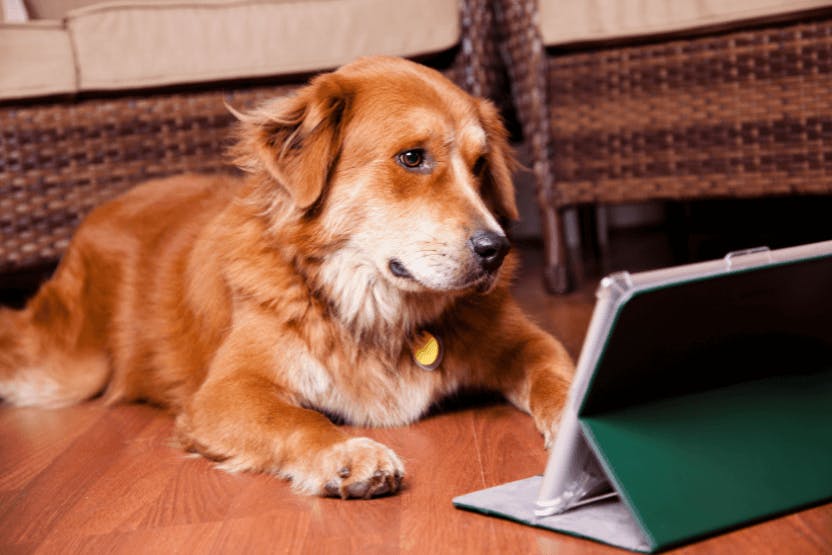 Many dog breeds were originally created to have jobs. Today, however, the majority of dogs are pampered members of the family and get everything they need without having to work for it. While there’s nothing wrong with doting on our beloved canine companions, doggie boredom can lead to health and behavioral issues. That’s why physical exercise, socialization, and mental stimulation are very important.

Fortunately, there are a number of ways to prevent boredom in modern dogs. We’re living at a time when electronic devices have become an essential part of our daily lives, and now, they can help your pooch too! Here are five furrific mobile games and apps for 21st-century dogs to entertain, fascinate and beat the boredom blues!

The idea of this game is simple, but it can keep your pooch entertained for a long time. Jolly Dog (iOS) or Jolly Pet (Android) is a game of catch where your dog has to catch the toys that appear on the screen with their paws. Each toy has a different behavior and sound, and the color palette of the app was purposefully chosen to suit canine vision.

When you first download Jolly Dog / Jolly Pet, there are only two toys (rabbit and mouse) and one environment (courtyard) available. For every 10 toys that are caught, additional toys and environments are unlocked. However, the free version is limited to only four toys and two environments. To access all 17 toys and 6 environments, which include a spider, gopher, crab, terrace, and seashore, you'll have to upgrade to the pro version.

If your pup loves squeaky toys, then they’re going to love this app. From the name to the user interface, Dog Squeaky Toy is a pretty straightforward app. You’re greeted by a selection of virtual squeaky toys when you open it; simply scroll left and right to see them all and take your pick. There are seven toys in all, including a dumbbell, basketball, and rubber chicken, each with its own unique squeaky sound. While many other similar apps merely list the names of the sounds, each sound on Dog Squeaky Toy is represented by an animated image to engage canine users. This app is also good to have on hand when you’re outside and you need a squeaky sound to get your dog’s attention.

“Because bored dogs chew socks…” is what it says on the loading screen of this game. If your furry pal has been chewing holes in your socks, download Puppy Tapper, stat! Puppy Tapper is another game of catch designed to prevent boredom in canines. The user interface is uncomplicated; right after the quick loading screen, you can select a critter for your dog to chase as well as a background. There are five backgrounds and four animals to choose from, and only the last animal, the Maltipoo, is paid. All animals glide across the screen in the same way and make the same squeaky sound and frowning face when caught, but your pooch probably won’t mind.

If the first two catch games are a cinch for your dog, then this one may provide more of a challenge. Lonely Dog Toy is actually six games in one, though the gameplay is the same: your pup must try to catch the objects or animals that scurry across the screen. Each toy has a different animation and sound, and of the six, the gopher and cat are harder to catch due to their fast and erratic movements. Chill canines can still play Lonely Dog Toy, though—just choose the fish game for them. Unlike in the others where only one critter or object appears at a time, two fish swim across the screen in a zen-like manner.

Want to let your pup try their paw at painting but worried about the potential mess? There’s an app for that. App for Dog is the first activity app designed for canines, and it includes three activities approved by dogs and pup parents alike: a painting game, yes/no buttons, and a classic clicker. The painting game, which is included in the iOS version for free, allows your pooch to channel their inner Pawcasso while keeping your house mess-free. Using their nose and paws, your dog can create digital paintings which you can then save to your device. There’s also a share feature, so you can proudly show off your little artist’s work to friends and family! Additional color palettes, the buttons activity, and the clicker can be unlocked via in-app purchase.

Did we miss your favorite mobile game for dogs? Share it with us in the comments below or on social media. Don’t forget to tag #wagwalking or @wag on Instagram for a chance to be featured!