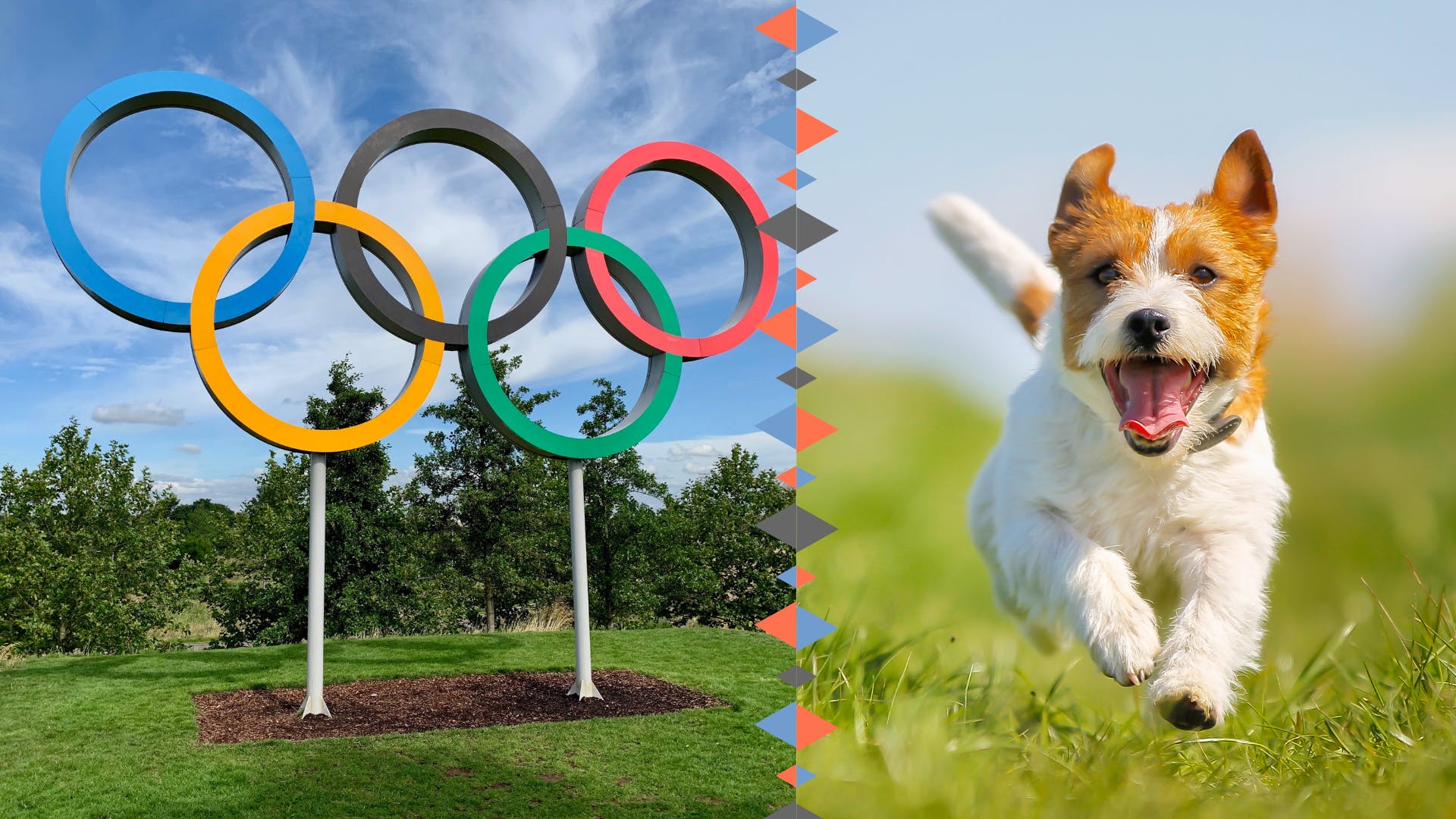 Mascots have added cultural flair to every Olympic Games since 1932. Three Olympic mascots were inspired by dogs: a Scottish Terrier, a Dachshund, and a Catalan Sheepdog, specifically. Individual Olympic sports don't have mascots (yet) — but wouldn't it be cute if they did? Which dog breeds would best represent some of the most "pawpular" Olympic sports? We've sniffed out a few of our top contenders. Let's dive in! (Olympic diving pun totally intended.)

There's no better mascot for the Olympic sport of mountain biking than the Rhodesian Ridgeback. While Olympic mountain biking courses are nothing like the flat savannas of Africa, where the Rhodesian Ridgeback originated, these powerful pooches are "pawpular" trail companions with mountain bikers. Thanks to their boundless energy and love of running, Ridgies are also a "grrreat" choice for those who enjoy bikejoring. This canine sport is similar to mushing — dogs are attached to a bike with a special leash and then run ahead, effectively "pulling" the bike.

With their slender yet muscular physique, the Belgian Malinois was practically designed for jumping long distances, both high and far. On average, the Mal can leap up to 8 feet high in a single bound. Some specially trained dogs can clear a 10-foot jump without breaking a pant! Compare that to the current records in the Olympic high jump: 7 feet and 10 inches for the men, and 6 feet and 9 inches for the women.

One look at the thick, shaggy coat of a Newfy is enough to make you wonder, "Are Newfoundlands really good swimmers with all that fur?" After all, Olympic swimmers are known for removing all their body hair just to shave a few milliseconds off their swim time. Looks can be deceiving, though! Their lung capacity, webbed paws, and dense coats make Newfoundlands marathon swimming champs, particularly in the icy waters of Canada, their home country.

While doggy diving is more practical, Olympic diving is more performative. You probably won't see a Lab somersaulting mid-dive like an Olympian. And Labs certainly make a big splash when they hit the water — unlike the world's best Olympic divers, who leave only a few bubbles in their wake as they glide beneath the surface.

French and English Bulldogs have a unique hobby most other dog breeds don't: they like to skateboard! Their short stature and low center of gravity make it easy for them to balance on a board. For brachycephalic Bulldogs, skateboarding is a "furrific" alternative to long walks, letting them smell the roses and feel the wind in their fur without overexerting themselves.

Skateboarding is a new Olympic sport that's taking the world by storm, one ollie at a time. Two Olympic skateboarders, Sky Brown and Kokona Hiraki, are the youngest competitors to win medals since 1936! Meanwhile, four-legged skateboarders have broken some world records of their own. In 2015, Otto the skateboarding English Bulldog won a Guinness World Record for "longest human tunnel traveled through by a skateboarding dog". Sure, that title isn't as coveted as an Olympic gold medal, but it's still pretty doggone impressive!

A hyper hound who needs plenty of space to run, the Border Collie is a fitting mascot for the Olympic sport of soccer. And it's no wonder why — Border Collies are famous for their love of playing soccer. (A quick YouTube search will return dozens of cute videos of Collies showing off their skills on the field!)

Their herding instincts and high energy levels also make them masters at treibball, a canine sport similar to soccer. In treibball, dogs are trained to push a series of exercise balls into a goal in a certain order — all within a time limit. We'd like to see Olympic soccer medalists try their paw at that!

Known for their smooth, spotted coat and striking blue eyes, Catahoula Leopard Dogs are every bit as beautiful as they are brawny. Hailing from Louisiana, this natural-born hunter is one of the few breeds known to climb trees when pursuing prey. But Catahoula Leopard Dogs don't need an incentive (like an Olympic gold medal) to climb. On YouTube, you'll find dozens of videos showing these sporty superstars scaling trees, just because!

The Summer Olympic Games might be on right now, but don't "furget" about the winter sports. No breed is a better Olympic mascot for skiing, or winter sports in general, than the hardy Siberian Husky. Huskies are best known for pulling sleds, but did you know they pull skis, too? It's actually a competitive canine sport called skijoring. Like Olympic skiing events, skijor races are between 5 and 20 kilometers long. The longest skijor race in the world, held in Russia, is 440 kilometers long!