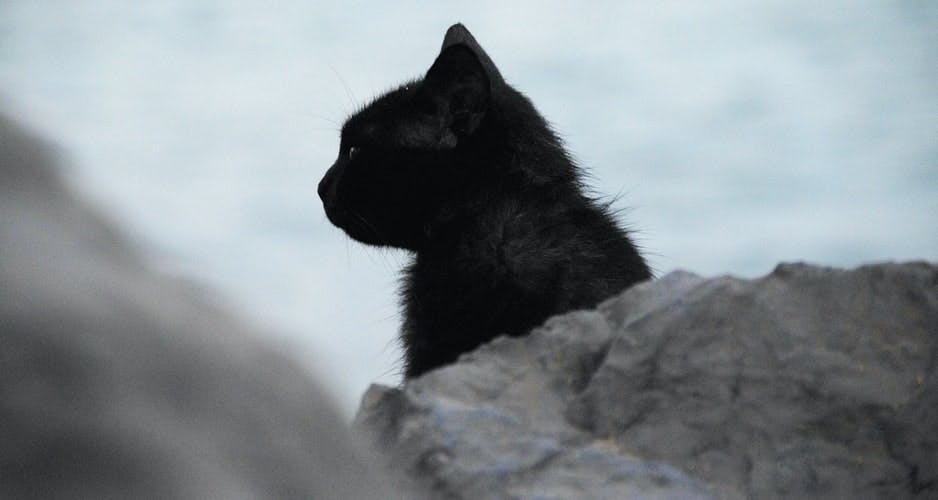 Ask people what they think of black cats, and you’ll get various answers. They are mischievous and clever. They are bad luck and devious. They are sweet and lovable, and make the best furkids. One thing is for sure- these dark-coated felines are certainly misunderstood.

When the Halloween season is in full swing, the image of a black cat can be seen everywhere. From holiday décor, to costumes for every age, black cats capture our imagination, often conjuring up images of witches and creepy crawlies in the night. Seeing a black cat’s luxuriously dark coat against the bright orange of a pumpkin is stunning indeed, but there’s a lot more to our favorite ebony furiends than meets the eye.

Here are some interesting facts about black cats that may change how you see them.

Black cats were once worshipped as Gods

In ancient Egypt, the black cat was the physical embodiment of the goddess Bastet, a woman with the head of a black cat who watched over the crops, women and the home. Cats performed the same functions on earth, and were often fitted with jewelry and treated like royalty. Every home possessed a cat, temples were dedicated to them, and to kill one was a crime punishable by death. Cats were also mummified in the same way as people, which shows just how important they were to the ancient Egyptians.

In Celtic cultures, there arose the tale of the Cait Sidhe, a magical black cat with a white spot on their chest that was known to be the Faerie King of Cats. Legend has it that if you left milk out for Cait Sidhe on Samhain night, or Halloween, he would bless your house. Perhaps this is why black cats are associated with Halloween, and maybe even why we leave out milk and cookies for another favorable personage on Christmas.

In fact, in many places in the world, black cats can herald good luck. In Japan, black cats can bring love or fortune. An English bride receiving a black cat as a gift will have a happy marriage, while having one appear on your doorstep in Scotland signals prosperity is on its way. The French call black cats “Money Cats,” and treating them with respect can bring riches. British sailors often brought cats on board to deal with the mice, but having a black cat could also ensure a safe return to shore. The wives of fishermen kept black cats in the home for the same reason.

The idea of black cats being unlucky may have arisen from an ancient Greek myth that gained favor in the tumultuous Middle Ages. After the goddess Hera transformed her servant into a black cat as a punishment, the cat aided Hecate, the goddess of witchcraft. As Christianity spread throughout Europe, it saw pagan cultures as aligning with the Devil, and sought to denounce their practices. Taking up the association with witches, Pope Gregory IX declared that black cats were symbols of Satan in 1233, and ever since, the dark-furred felines were thought to be demons in disguise, or helpers of demonic worshippers.

There are 22 breeds of black cats

The Cat Fanciers’ Association has recognized 22 breeds that can generate a solid black coat. From the fluffy coats of long-haired Persians, Norwegian Forest Cats and Ragamuffins, to the shorter Scottish Folds and Japanese Bobtails, these black cats can be quite distinctive. But perhaps the most iconic breed is the Bombay.

Created in the 1950s by crossing black American Shorthairs with Sable Burmese, the Bombay was made to resemble a miniature black panther. This sleek, short-haired feline is the only cat breed that is always a solid black color, and with its glowing eyes, is certainly a spitting image of its larger cousin.

Black is the most dominant fur color

While the gene for a tabby coat is the most dominant pattern in feline DNA, the black color gene is the most dominant when it comes to the color of coat. This means that if two cats who have the gene for a black coat produce offspring, those genes override the tabby pattern gene to produce a solid black coat. Even if one of those genes is recessive, if both parents have the black color gene, there’s more of a chance their offspring will be black. This means that there are more black cats out there than any other color!

Even if that tabby pattern has been repressed by the black color gene, it may still be there. A cat must have another gene present to completely override the tabby pattern, which means many black cats are undercover tabbies! If you’ve ever seen stripes in your kitty’s fur while they basked in the sun, that tabby pattern wasn’t fully repressed.

These undercover tabbies can even have a change in color the longer they are exposed to sunlight, causing the black fur to turn to a rust or brownish-red color. How does this happen? The sunlight can break down the black pigment to reveal the colors and patterns hiding underneath.

Black coats may have evolved for survival

While jaguars and leopards, the ancestors of many domestic cats, may have evolved black coats to better hunt at night, researchers are finding evidence of another reason. The same gene that causes black coats, or melanism, also affects a cat’s immunity. Scientists have discovered that these cats have stronger immune systems and an increased resistance to certain diseases, such as FIV (feline immunodeficiency disorder). These mutations affect the same genes in humans, and may even be able to help us cure HIV.

Most black cats have yellow eyes

That black color gene that causes melanism doesn’t just create black fur and a stronger immune system. The excess of melanin also causes these kitties’ eyes to be the distinctive golden yellow to coppery amber color we’ve come to know. Bombay cats were bred to keep these colors intact, but you can find other black cat breeds that may have been passed a dominant gene for green or blue eyes. These rare dark kitties are unicorns indeed!

In Japan, black cats have their own café

Japanese fans have shown their love for dark-coated felines by creating the world’s first café devoted to black cats. At Nekobiyaka in Himeji, Japan, you can relax comfortably in a space fit for the most royal of animals while being surrounded by- you guessed it- black cats. Outfitted with cat trees, elevated shelves, platforms and tunnels, the café is home to several cats you can pet and adore. While you are asked to not pick them up or wake them from a nap, you are encouraged to play and pamper them to their heart’s content.

Black cats are the toughest felines to photograph

Not too surprisingly, amateur and professional photographers can find it difficult to take a good picture of a black cat. Often, their dark features blend together to create a furry, black blob. Pawfect lighting is key to highlighting the beauty of these furbulous felines.

In a shelter setting, though, its often tough to get the conditions right for a good photo, and adoptable black cats can virtually disappear next to colorful ones on a website. This may be one of the reasons why fewer black cats get adopted than cats of any other color.

Just days before Halloween, National Black Cat Day is a time to show your love for the cat kingdom’s most misunderstood member. Shower your dark-coated bestie with love and affection to remind them just how special they are.

If you haven’t yet opened your heart to a majestic black cat, consider adopting one. Many shelters close adoptions for black cats during October to protect them from becoming props or pranks, so you may have to wait a few days. But come November, you can reap the pawtastic benefits of bringing a gorgeous black cat into your home and gaining a new furever furiend.

I love my black kitty