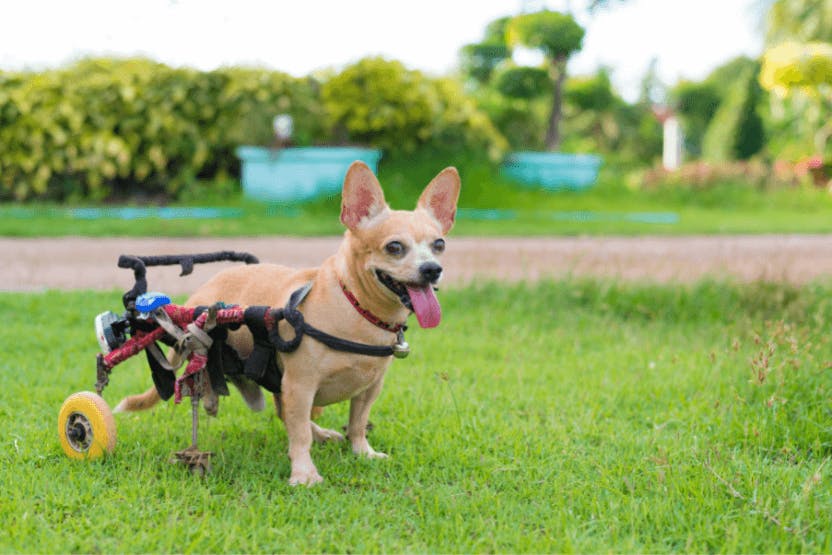 Dogs are great teachers, and dogs with disabilities are especially good at reminding us that it’s possible to bounce back from adversity. Author Barbara Techel witnessed this firsthand with her Dachshund Frankie; despite becoming paralyzed after a fall and being diagnosed with intervertebral disc disease, the pup was able to live a long and happy life. After Frankie passed away, Techel founded National Walk ‘N Roll Dog Day (NWNRDD) in her memory and to honor all dogs in wheelchairs.

National Walk ‘N Roll Dog Day has taken place on September 22nd every year since 2012 to celebrate the wonderful pups in wheelchairs who teach us to embrace each day with love, hope, and joy. For this year’s NWNRDD, check out these 5 pawmazing dogs in wheelchairs who will surely make you smile!

Benjamin Bunny, or Benny for short, is a smiley Goldendoodle who has won the hearts of millions thanks to his positive outlook in life. Born with a spinal deformity, he was surrendered to Georgia-based rescue Bosley’s Place when he was just two weeks old. Benny is paralyzed from the shoulder blades back, but he’s guaranteed to be one of the happiest dogs you’ll ever see.

Euthanasia was suggested as an option when Benny was young, but thanks to Bosley’s Place and his foster family at The Tucker Farm, Benny is currently living his best life. He loves to play with his foster siblings, and earlier this year, he was even selected to participate in Puppy Bowl XVIII, where he took home the “Most Pupular” title!

Benny’s foster mom Beth Williams says, “He absolutely lives in the moment. He doesn’t think about his differences. He just thinks about what he does have.”

Kwan is one of the hundreds of dogs who live in The Man That Rescues Dogs sanctuary in Thailand. A former street dog, the light brown pup was hit by a car when he was only two months old, leaving his hind legs paralyzed. Kwan, whose name means “gift” in Thai, was brought to the sanctuary anemic, malnourished, and carrying blood parasites. With care that included acupuncture and physiotherapy, Kwan eventually regained his strength and learned how to use a wheelchair.

Today, Kwan enjoys running around in his wheelchair, swimming in the pool, and hanging out with his canine and human buddies. He is the best-known member of the sanctuary’s “wheelchair mafia” and serves as an ambassador for the The Man That Rescues Dogs, helping raise awareness about dog rescue and adoption in Thailand through his own Instagram account, which has more than 5,000 followers.

Pigeon first broke the internet when a video of her trying out her new set of wheels was posted in late 2017. The viral clip, which has been viewed 1.7 million times, shows the Pit Bull excitedly running around a canine rehab clinic, clearly happy to be able to walk again. While it typically takes time for dogs to get used to their wheelchairs, Pigeon embraced hers and just took off.

With her contagious positivity, it’s hard to imagine that Pigeon had a rough start in life. A car accident had left her without the use of her back legs when she was less than a year old. She was abandoned at the vet, adopted, and then returned. But Pigeon’s story has a happy ending, and it wasn’t long before she found her forever home. She is also now the CEO of her own dog treat company, which educates and spreads awareness about disabled companion animals. Follow more of Pidgeon's adventures on her Instagram page!

Cyrus is a two-legged senior pup from Pennsylvania who has let neither his age nor his disability slow him down. Born without front legs, the Terrier mix is a certified therapy dog who regularly visits hospitals to bring joy to patients who are recovering from amputation surgeries or are dealing with challenging medical conditions. He also takes part in animal-assisted activities for children.

In an interview with Drool Magazine, Cyrus’s dad Domenick Scudera says, “...you train a dog to be a therapy dog, but when you actually start doing the work, something happens that you can’t train. They just naturally have an understanding of what people need.”

At home, Cyrus likes to stay close to his dad and be carried around by him. When he’s not next to his dad, the small gray pooch can be found chilling with his fursiblings, two of whom are also two-legged therapy dogs.

Like many dogs, Noodle loves to hike. Because of her spinal cord injury, she has to use a wheelchair when she hits the trails, but that hasn’t stopped her from overcoming figurative and literal obstacles.

Found as a paralyzed stray in Washington, Noodle was adopted by physical therapists Kyle and Bree Corbin who nurtured her sense of adventure early on. At first, Noodle didn’t want to venture far from home when her parents took her out for walks, but she quickly blossomed and now wants to go everywhere, whether it’s getting around on paw and wheel or riding in a bike trailer.

According to the Corbins, they need to do extra planning to make sure the trails are wide enough for Noodle’s wheels, but other than that, it hasn’t been much of a challenge caring for the rescue pup. Always ready to roll, Noodle has become an inspiration to her parents and many others.

It's clear our canine pals can do pawmazing things! When not capturing our hearts with their uncompromising love and playful energy, they also show us how we can all overcome adversity and reach for the stars! Let these incredible pups inspire you to your greatness.

Are you the proud parent of a pawmazing dog in a wheelchair? Share your own stories and pics in our comments section below, or tag us in a post on Instagram @wag for a chance to be featured on our feed!

How to Get More Cat Sitting Clients on Wag!