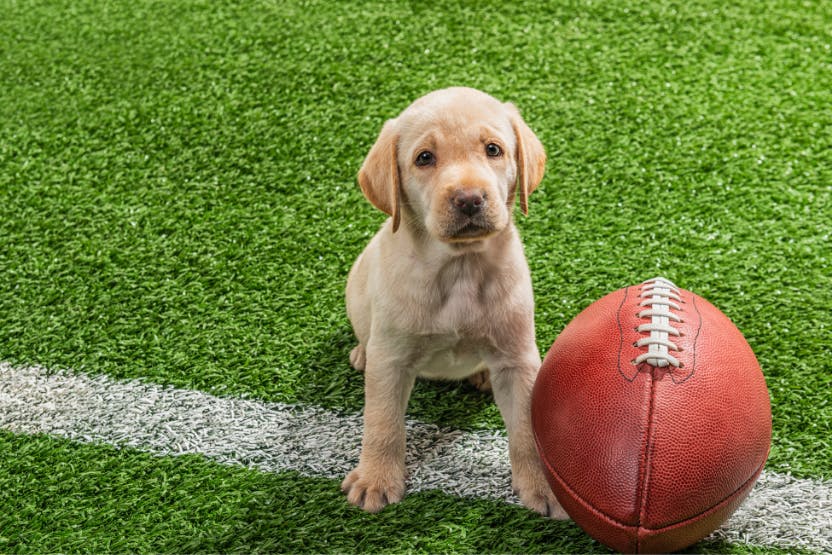 While the football world was getting ready for the biggest showdown in human sports, animal lovers across the world were tuning in for Puppy Bowl XVIII, the biggest sporting event in dogdom! Featuring over 100 contenders from rescues and shelters all over the country, this year’s Puppy Bowl was full of exciting runs, furbulous touchdowns, and cuteness galore!

Did Team Ruff keep their championship title, or did Team Fluff steal the win? Who was crowned MVP? And who got a penalty for illegal bathing? Get the answers to all this and more in this recap of the 2022 Puppy Bowl! Puppies get ready to rumble!

For the 18th year of the Puppy Bowl, these contenders brought it all! And with so much celebrity help, they were sure to play a game to remember! From returning hosts and coaches Martha Stewart for Team Ruff and Snoop Dogg for Team Fluff who kicked off the extravaganza with a call to “Raise the Woof!”, to First Lady Dr. Jill Biden and First Pup Commander wishing us a Happy Valentine’s Day, this Puppy Bowl was sure to be one for the ages!

Elmo and his rescue pup Tango kicked off the game with a coin toss, and the puppies were off!

And on to the game!

We’ve seen many Puppy Bowls with some pawsome MVPs over the years, but Puppy Bowl XVIII is sure to go down in history! So many furbulous players, so many touchdowns, and a score that was too close to call throughout the entire game. Both teams were out for glory, and it was clear that neither side would accept a loss. Last year’s champions Team Ruff proudly defended their title, but Team Fluff wasn’t backing down for a moment.

Right out of the gate, Wes, a Golden Retriever mix from Team Fluff, was instantly in defense mode, and began barking back the other players. But Surf from Team Ruff, an Australian Shepherd/Poodle mix, responded with a big bark of his own and ran Wes right off the field. This would begin a rivalry that would come back to haunt these pups later in the game.

Team Fluff wouldn’t be put down so easily, though, and with Birch hitting the field, the tables would turn. Despite Surf’s “Illegal use of paws to the face,” this little Chihuahua/Toy Fox Terrier mix stood up to the big, fluffy Aussie, and scored the first touchdown of the game!

Itching for more highlights?? Check out these top pup plays of the game!

And the winners are…

But that’s not all!

Who was the Most Valuable Pup of the game? While Birch scored 2 touchdowns, Ted D. Bear scored 4, and Chorizo, who wasn’t in the running for the viewer chosen title scored 3, it was Kirby who won the hearts of fans across the world! For this service pup’s constant pawrific plays and furrific timing, as well scoring a double touchdown and double reverse touchdown, Kirby was crowned the MVP of Puppy Bowl XVIII!

Chorizo won the Drive of the Day with his fancy footwork and small size that kept Team Ruff in the lead throughout the first quarter.

And remember Benny, the dog on wheels? This Goldendoodle who was born with fused vertebrae that affected his back legs proved to be quite the contender, earning a field goal for his team and winning the hearts of millions. Benny was voted the Most Pupular pup, and shed light on how much a dog with a disability can achieve. Go Benny!

Support for the Pups!

Not all the pups were ready for action, and some were too fired up to focus on the ball. Some pups got a celebrity locker room pup talk to help them get back in the game, such as Elmo and Tango who helped Wasabi, and Tayce who got fired up by Wanda Sykes.

The Kitten Half-time Show allowed the pups a break from gameplay, and gave the viewers a whole lotta cuteness to enjoy! This year’s theme was a beach party, and the kittens were relaxing in their beachside seats and pools just their size, ducking in and out of sandcastles, kicking beach balls, digging in the sand, and playing with a myriad of toys. All adoptable rescues from Pack Leaders Rescue of Connecticut, these felines were hamming it up for a chance to find their furever family!

As for this year’s underachievers, the Underdog Award went to Mr. Tinkles, a fluffy Shih Tzu/Pekingese who spent his time on the field hiding behind an endzone pylon which earned him a “Wallflowering” penalty. You’ll get em’ next time, Mr. Tinkles!

It’s all about the rescues!

The Puppy Bowl isn’t just about pawdorble puppies cavorting for our pleasure- it’s about shedding light on the plight of homeless animals everywhere. Each Puppy Bowl player is drafted from rescues and shelters across the country, and Animal Planet pairs with each one to ensure that every single animal in the Puppy Bowl fulfills their Cinderella destinies and finds their furever home.

While many of the pups you see on game day have already been adopted, some of them are waiting in the wings or have siblings that are also waiting for someone to love.

Ready to adopt? Check out the Animal Planet and Discover+ adoptable pet link to find pups and kittens featured on the show, or reach out to these pawrific rescues where the players of the bowl were drafted to find your new best furry pal!

What? The Puppy Bowl is over?

The next batch of pups for Puppy Bowl XIX have some big paws to fill, but we’ll be waiting to watch them in all their furry glory. If you can’t get enough of puppy-on-puppy action, make your own gridiron and invite local athletic pups to compete in your own Puppy Bowl!

To help your canine MVP shine, train them like a Puppy Bowl athlete! Book an in-home session with a dog trainer today to get your furry pal on the road to victory!