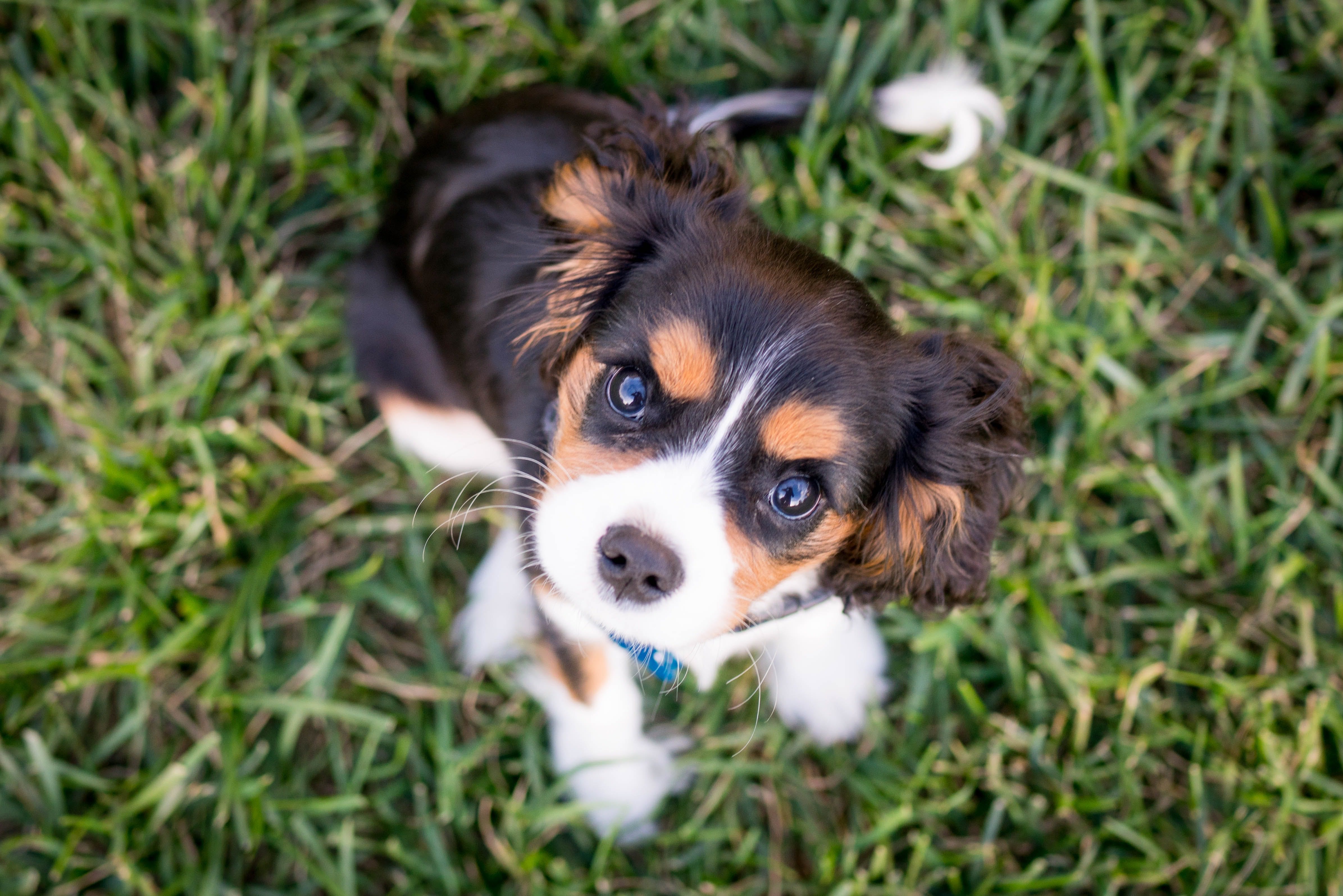 Animal lovers rejoice, because it’s time for the Puppy Bowl! Featuring over a hundred puppies cavorting, running and wrestling on a pup-sized football field, the Puppy Bowl is, by far, the cutest sporting event of the year!

This year for Puppy Bowl XVIII airing on February 13th, Team Fluff takes on Team Ruff in a bid to steal their Championship title! The pups will attempt to score touchdowns by taking one of the many toys on the field across either endzone, but there are a lot of distractions! From built-in water bowls for a drink or a bath, to tons of fun chew toys and plenty of furbulous pups to play with, these pooches will need to work hard to help their team win the coveted “Lombarky” Trophy. And one lucky pup will even be crowned the MVP (Most Valuable Puppy)!

These top puppy athletes aren’t just playing for bragging rights, though, as each one is on a quest to find their fur-ever homes!

From homeless to famous!

When Animal Planet set out to find something to air during Super Bowl Sunday, they weren’t just concerned about ratings. They also wanted to spread the word about how furbulous rescue animals are, and so the Puppy Bowl was born!

Puppies are drafted from rescues and shelters across the country to compete in the fluffiest game of football you’ve ever seen! But only a percentage of the hundreds of entries will catch the producers’ eyes by showing their star quality. And for these pups, life is about to change!

Whether abandoned, surrendered, left behind or simply born on the street, each rescue pooch featured in the Puppy Bowl goes from homeless to TV star overnight! Being famous comes with a lot of advantages- but these pups don’t do it for the fame. They are looking for their fur-ever family, and being able to strut their stuff in front of millions of viewers gives them the best chance to find them!

To be sure each pup fulfills their Cinderella destiny, Animal Planet teams up with each participating shelter and rescue to make sure these athletes are adopted. There’s been a lot of pawmazing rags to riches stories that have come out of the Puppy Bowl! Here are some of our furvorites!

Left behind in an abandoned house with his litter mates, the future looked dim for this tiny Chihuahua mix from Florida. Luckily for him, the Florida Little Dog Rescue stepped in to look after the pups, and Bubba’s road to stardom began.

Not only did this little 16-week-old furball catch the eyes of the Animal Planet scouts with his gorgeous, eye-catching coat, but he also had the energy of a champion. He was promptly drafted into Team Ruff for Puppy Bowl XI, and was even chosen to be in the starting line-up! Things were looking up for this homeless pooch.

Bubba brought it all to the field, scoring two touchdowns for his team and getting right in the middle of all the action. But the real prize was yet to come.

Michelle Maskaly had volunteered to help out at the Puppy Bowl during filming, and wasn’t looking for a new furry pal. She had just started a new job, and was planning several trips, but when she saw Bubba, it was love at first sight. This spritely Chi helped Team Ruff win the game, but he also scored his fur-ever home when he won Michelle’s heart.

Today, Bubba goes by the name Maddox, and is giving back to his community as a certified therapy dog. Michelle says he’s grown into a clever, calm and dignified dog, and spreads his unending love throughout the hospitals and nursing homes he visits.

You can check out updates on Bubba on his mom’s Instagram page!

Olympia and her sister were dumped in a plastic bin outside a gas station in the Ozarks. These pawdorable Great Pyrenees pups were cute enough to attract the eye of a compassionate Missourian who rescued them. Soon, the pups were safe with the folks at Big Fluffy Dog Rescue, but sadly, there would be tragedy before too long.

While they were being cared for, Olympia’s sister passed away, leaving Olympia homeless and without any family. Luckily, this big fluffy pup was a survivor! She landed a foster home, then another, but kept up hope the fur-ever home she dreamed of was out there somewhere. Then, she got her big break!

When the Puppy Bowl XIV came calling, she was a paw-in with her athletic build and determination.  Drafted to Team Fluff, this big pup was expected to help lead her team to victory as part of the starting line-up. At just 19-weeks-old, she was a tough contender, though she often took time out for some snuggles and to show off her tricks. Ultimately, Team Fluff took the trophy, but who would take Olympia? Would she find a family to love?

With looks this pawdorable, of course she did! Olympia now lives with her pawrific fur-ever family on Deer Island in Maine. When she’s not hoarding toys, she’s playing with other pups or cuddling with her family. And it seems that Olympia’s time as a top athlete left her wanting for more! Last we heard, she was training for agility competitions. We’re rooting for you, Olympia!

Chunky Monkey and her homeless siblings, all named after Ben and Jerry ice cream flavors, were down on their luck when Green Dogs Unleashed came to the rescue! A pawdorable Chow Chow mix, this pup was the largest of her litter and was soon drafted into the Puppy Bowl. Being quite fluffy, Chunky Monkey had a lot of built-in padding which was pawfect for game-winning tackles.

At just 15-weeks, the expectations were high for this young bruiser. Chunky Monkey found herself on the starting line-up of Team Fluff, and for many, she was a top contender for MVP. But would the exposure lead her to a loving family?

As she came out onto the field, fans waited in anticipation to see this fluffball dominate. But Chunky Monkey surprised them all! Instead of earning fame and glory with record breaking touchdowns, tackles and blocks, this pup became famous for a nap. That’s right, Chunky Monkey earned a foul for her team for “excessive slumber”, and instantly became an internet sensation.

Fans of the large pup took to Twitter to voice their love and support during the game, which gave her even more exposure! Would someone love her enough to give her the fur-ever home she dreamed of?

When the game ended with a win for Team Ruff and another pup crowned MVP, Chunky Monkey didn’t let that stop her. She won her own title of MVN - Most Valuable Napper, but even better, she scored a pawfect ending.

With her freckled nose and tongue, and gorgeous gray eyes, Chunky Monkey was adopted by Cassandra Asekhauno who tweeted her photo as they watched the game, and as she took another sideline nap. Today, Chunky Monkey, now called Ellie, lives the good life in Virginia with her loving family.

It’s all about the rescues!

The Puppy Bowl is about more than just cute wrestling matches and touchdowns. Each pup that plays in the game has been rescued by the kindness and support of tons of volunteers, organizers, foster parents, pilots, drivers, and many others who lend their time, money and skills to make sure these little canines come out on top. That means that each pup in the Puppy Bowl is an ambassador for rescues everywhere, and prove that no matter what breed or color they are, or what circumstance they come from, they are full of love and ready to find their best human friend.

And it’s not just the pups. All the kittens in the half-time show, the sideline cheerleaders that have included ducks, chickens, piglets, and even hedgehogs, the hamster scorekeepers and more are all adoptable too!

If you are looking to adopt an animal from the Puppy Bowl, or their sibling, cousin or friends, check out these furrific rescue organizations:

So, sit back, get out the dog beer and pup treats, and get ready to watch the Puppy Bowl XVIII on Sunday, February 13th at 2 PM ET on Animal Planet and Discovery+ with your best animal MVPs!

Got a furvorite rescue story of your own? Share it with us in the comments below!