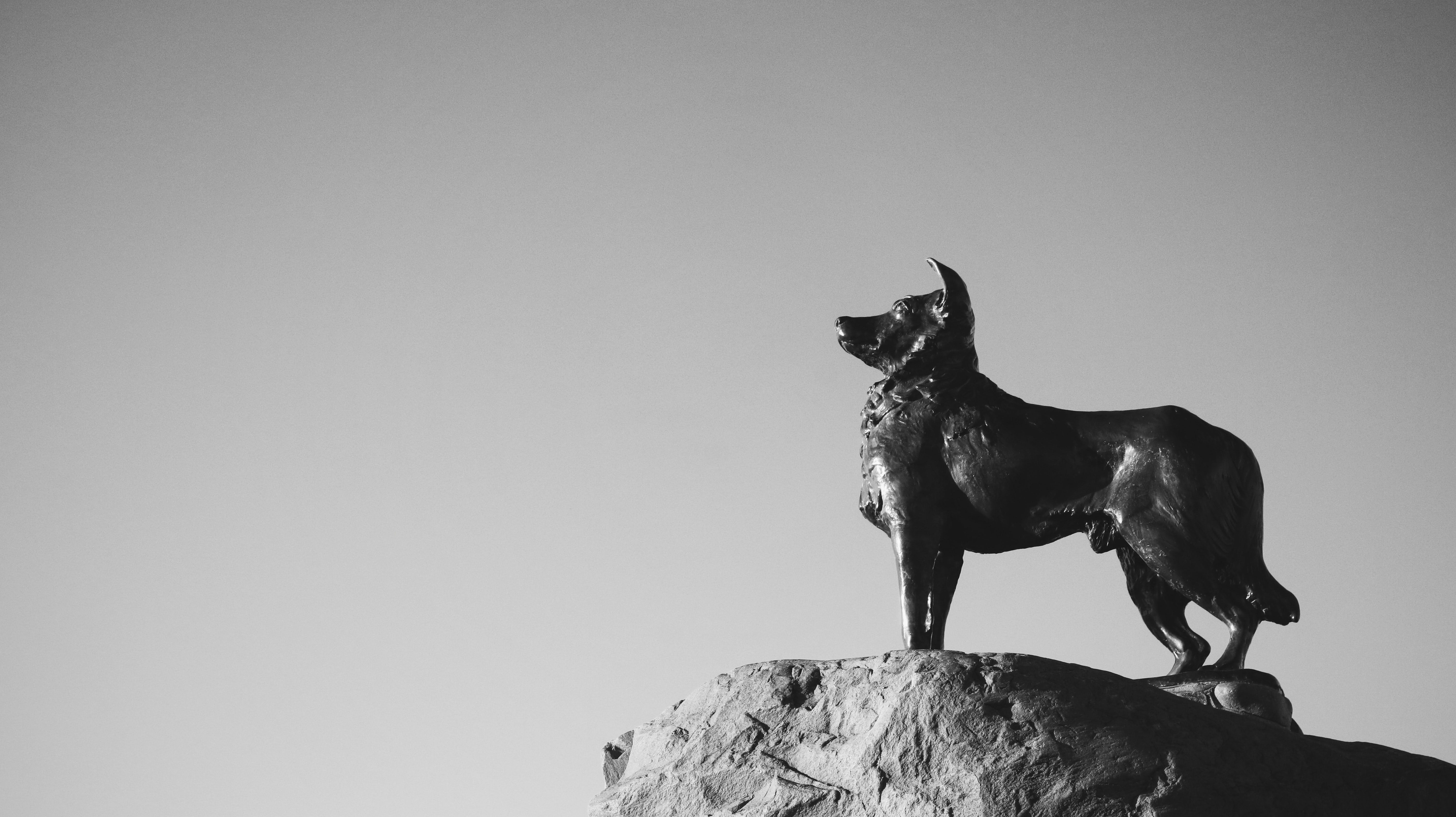 People have engaged in selective breeding for thousands of years. Unfortunately for us, ancient dog lovers were much better at breeding strong hunters and herders than keeping records.

How many species of dogs are extinct? We have no idea. Luckily, archeologists and researchers have dug deep (literally) to uncover clues about beloved breeds lost to time. We've done some digging of our own to bring you these fun factoids about some of the world's most intriguing extinct dog breeds.

The Chiribaya Shepherd, also called the Chiribaya dog, was a llama-herding dog native to ancient Peru.

The Chiribaya people inhabited the Atacama Desert in southern Peru and parts of Chile for more than 1,500 years. Despite the unforgiving desert climate, the Chiribaya flourished, producing maize and chili peppers, fishing from the area's four rivers, and rearing llamas and alpacas for their wool.

Llama wool is coarse, making it unsuitable for most textiles. The resourceful Chirbaya solved this problem with selective breeding, producing fine fiber llama wool. Because llama and alpaca farming were crucial to the Chiribayan culture and economy, Chiribaya dogs were treated like royalty in life and death.

In 2006, local archeologists discovered 43 Chiribaya Shepherds buried individually in an ancient cemetery in Ilo, Peru. The dogs were wrapped in llama blankets and buried with llama and fish bones — toys and treats for their journey to the afterlife! The aptly nicknamed "mummy dogs" were beautifully preserved, with fur, tissue, and teeth still intact.

Apart from the ancient Egyptians, the Chiribaya is the only ancient culture believed to have given such a high social status to pets. Experts believe dogs in modern-day Peru may share some of the traits of their royal ancestors.

The Molossian Hound was an ancient Greek dog and "pawhaps" the most famous extinct breed in history. Bred in ancient Epirus by the Molossian tribe, this gigantic guard dog is the ancestor of the Mastiff and the stuff of literary legend.

A Molossian features in the Satyricon, a 2nd-century work of Latin fiction. Trimalchio, the main character, has a Molossian named Scylax. (Fun fact: scylax translates to "pup"!) Check out this quote from the ancient story on Trimalchio's bond with his dog:

"Then Trimalchio threw him a bit of white bread and said, 'No one in the house loves me better than Scylax.'"

The Molossian also earned a mention in book 9 of Aristotle's The History of Animals. The philosopher calls the breed "superior to the others in size, and in the courage with which they face the attacks of wild animals."

Unlike some ancient dog breeds, we know what the Molussus might've looked like — all thanks to an impulsive "dumpster dive" in 18th-century Rome. Esteemed art collector Henry Constantine Jennings was ambling through Rome when he passed Bartolomeo Cavaceppi's workshop. Jennings decided to rummage through the rubble out back, where he found "a huge but fine dog...worthy of the best age of Athens":

Marble statue of a seated Molossian Hound with a docked tail; a Roman copy of a Hellenistic bronze original, muzzle and one leg repaired. | © The Trustees of the British Museum | License | Source

The marble sculpture, which dates back to the second century, is thought to be a replica of a bronze dog statue housed in the Temple of Juno until it was burned down in 69 AD.

The "Jennings Dog" now guards gallery 22 of the British Museum.

Also called the vernepator cur, the turnspit dog gave a whole new meaning to the term "working dog". In 16th-century Britain, the kitchens of inns and large homes were outfitted with turnspits: large, deep fireplaces with a meat-roasting spit rotating over an open flame.

Young male kitchen staffers were tasked with the job of turning the spit manually. To avoid overheating, they stood behind bales of wet hay and cranked for hours upon hours, coming away with blistered hands.

To reduce their toil, the British began breeding turnspit dogs. These long-bodied, short-legged dogs ran on a wheel that connected to the spit. The wheel was mounted to the wall, high above the spit, to prevent overheating. Two dogs worked in shifts to cook the meat evenly.

Although turnspit dogs were given Sundays off and allowed to attend church (where they served as foot warmers), they were treated more like kitchen appliances than beloved family pets. They're often described as "ugly" in historical texts. Because they were essentially servants, few records were kept of them.

Tragically, turnspit dogs often ran away on roasting days and were sometimes replaced by geese, who could keep the wheel turning for up to 12 hours. The dogs could even sense how much time had passed. If they were kept in the wheel past their usual working hours, they'd jump out of their own accord, leaving the humans to take over.

In the 19th century, spit-turning machines called clockjacks were invented. Turnspits fell out of fashion by the early 1900s, and the dogs who operated them became a symbol of poverty. By the early 20th century, turnspit dogs were extinct.

Despite this sad legacy, turnspit dogs did enjoy their 15 minutes of fame. Queen Victoria was the proud pet parent of 3 "turnspit tykes", and a satirical poem was published about them in 1705.

Allegedly, our four-legged friends also have turnspit dogs to thank for the Society of the Prevention of Cruelty to Animals. By the mid-1850s, turnspit dogs had made their way to American hotel kitchens, where their mistreatment was witnessed by Henry Bergh, who later founded the ASPCA.

A taxidermied turnspit dog named Whiskey is on display at Abergavenny Museum in Wales. If we could bring Whiskey and his sweet brethren back, we'd treat them to the life of luxury they deserve!

Heads-up: the information on this breed may be distressing for some pet parents and animal lovers. Reader discretion is advised!

Hawaiian poi dogs were semi-domesticated and descended from dogs brought to the islands by Polynesian settlers. Because Hawaii didn't have much in the way of big game, Hawaiian poi dogs were an important food source, especially for women. (Hawaii's ancient legal system, called kapu, prohibited women from eating pork.)

Ancient petroglyphs in Oahu depict poi dogs as having short legs, long backs, flat heads, and pointy ears. In 1816, German painter and explorer Louis Choris sketched the only surviving image of a poi dog. Shortly afterward, Hawaiian poi dogs bred themselves into extinction with feral dogs brought to the islands by Western colonizers.

As much as we'd love to bring this dog breed back, we wouldn't be the first to attempt it! In the 1960s and '70s, the Honolulu Zoo launched a program to bring Hawaiian poi dogs back from the grave. Within 3 generations, the program produced Hoku, a female with similar physical traits.

Jack Throp, the director of the zoo, oversaw the program as part of a living exhibit. In 1976, Hoku traveled from Honolulu to Tahiti on a Polynesian canoe — a re-enactment of the journey ancient Polynesians would've taken to modern-day Hawaii.

Today, the term "poi dog" is used in Hawaii to refer to any mixed breed.

The Marquesan dog is another ancient Polynesian breed. Much of what we know about the mysterious Marquesan comes from ancient petroglyphs and stone carvings. Unfortunately, experts think these artistic renditions, particularly the petroglyphs, aren't entirely realistic. To the untrained eye, they more closely resemble llamas than dogs.

Historians believe the Marquesan went extinct before 1595, when Europeans began colonizing the islands. However, a 1998 excavation of an ancient cemetery in Tahuata found that this breed may have survived through the mid-1800s. Even if the Marquesan did live on the island alongside European colonizers, they were believed to be extremely rare.

In 2000, archeologists discovered 3 dogs of unspecified breed buried alongside humans on the island of Ua Huka. One dog was buried in their own coffin. Carvings of dogs were also discovered near important religious sites, suggesting the Marquesan (and perhaps dogs in general) enjoyed the same social status as the ruling class.

More research is needed to determine whether the dogs discovered on Ua Huka are the long-lost Marquesan and what role these dogs played in ancient Polynesian life.

Royals have kept canine companions for millennia — Corgis for Queen Elizabeth, Whippets for ancient Egyptian rulers, and King's White Hounds for 17th-century French monarchs. The origins of this now-extinct breed aren't clear. Some sources say the King's White Hound dates back to the late 1400s, while others say it originated in the mid-1600s.

What we do know is the King's White Hound descended from a solid white St. Hubert Hound named Souillard. This scenthound allegedly bred with the king's existing hounds, and Souillard's white offspring gradually replaced the king's hounds until the whole royal pack was white. Although this first generation was all white, its descendants came in a variety of colors, from spotted to solid black.

According to one source, future kings crossed the King's White Hounds with other breeds — including the Italian Pointer, Grand Fauve de Bretagne, and Talbot Hound — to improve the lineage. By the mid-1600s, the royal pack was said to have numbered 90 dogs whose speed and hunting prowess earned them 4 stags a day. The pack was disbanded in 1725, when King Louis XV established a new pack of English Foxhound hybrids.

Several other French breeds descended from the King's White Hounds, including the Grand Griffon Vendéen and the Porcelaine.

Also called the Dalbohund, Dalbos were cattle dogs in 17th-century Sweden. This big, floofy dog protected grazing cattle from wolves and bears. While Dalbohunds were strong and agile, it wasn't uncommon for them to sustain serious injuries from predators. To add an extra layer of protection, farmers outfitted them with spike collars.

By the early 1820s, the Dalbo's numbers were steadily declining, along with the local wolf and bear populations. In the mid-1800s, Dalbo dogs were used primarily as guard dogs. While some locals attempted to save the breed, it was declared extinct in 1913.

Experts aren't sure whether the Dalbo dog originated in Sweden or migrated to the country from somewhere else. We may not have known anything about the Dalbo dog if not for Il Öhman, who researched the breed throughout the 1950s and interviewed locals who remembered it. While she didn't find any remains of Dalbo dogs, she did receive photos of a purebred Dalbo named Bella dating back to 1904. Talk about a photogenic pupper!

There's no better symbol for the Middle Ages in England than the Talbot hound. The grandfather of the Beagle and Bloodhound, this hunting dog inspired everything from poetry to paintings. Many English coats of arms also feature Talbot mascots.

The Talbot was slower than other hunting breeds, but what they lacked in speed, they more than made up for in scent-tracking ability. William the Conqueror kept a white Talbot as a deer-hunting companion and is thought to have introduced the breed to England. Talbots were later used for fox hunting and crossbred with Greyhounds to increase their speed.