If Your Dog Ran the Olympics...Here's What They Can Compete In 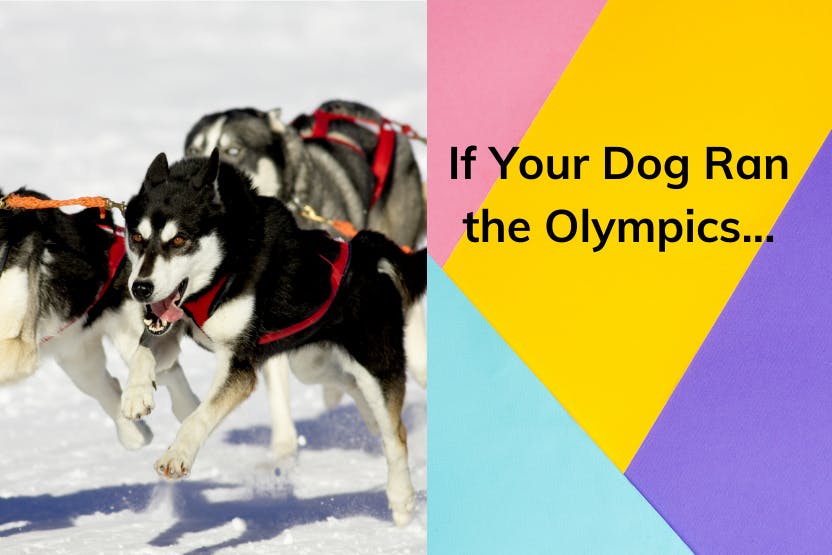 All dogs are the best at something, even just lying in the shallow end of the pool to keep cool. Every canine has their game, and we can think of several that might qualify as Olympic sports! Olympic competition focuses on the best, fastest, strongest, and most graceful humans in the world. Many dogs practice with their pet parents, and even pick up some of their moves. But a real Doggy Olympic Games should celebrate the things pupsters can excel at. Here’s a list of a few of the paw-sible events made just for doggos. Please note that all medals are edible:

Nothing attracts a Labrador Retriever’s attention as fast and as completely as a squirrel darting across their field of vision. This event uses parallel wire tunnels, one for the squirrel and the other for the fur-buddy. The squirrel’s tube is open at the far end into a pen. The squirrel and the pup are released at the same time and the Lab’s speed and artistic routine (leaping, rolling, losing track of where their feet are) are judged by a panel of humans. The gold goes to the dog who scores the highest points in keeping up with the squirrel along with their creative artistic flourishes.

This is an event that is run during the Winter Olympics consisting of international teams of Siberian Huskies and musher dogs hooked up to sleds. The snowy course is a half-mile, and the gold goes to the husky team that reaches the finish line first. The sled carries a load of “cargo” of exactly 300 pounds, plus the driver’s weight. The event is open to huskies and other musher dogs, and teams consist of 4 dogs each. Mush!

The prizes for this event are awarded based on how high a dogster can jump, straight up, from a standing position. Terriers of all breeds can participate in this event, and dogs’ handlers may use “bait” like a small piece of meat or another treat as a stimulus, although Jack Russell Terriers and other jumpers rarely require an excuse or motivation to jump.

This event begins with the Australian Shepherd pupster in a yard into which are loosed 50 sheep. Scores are based on speed and technique in herding the sheep into the narrow chute at one end of the yard. This is a timed event, and the number of sheep left in the pen at the end represents deductions to the overall score. Extra points are given by the human judges for the most clever, effective, or comical moves.

Any dog who has qualified for long, arduous mountain trekking may compete in this event, in which the Colorado Mountain Dog excels. The course is laid out to contain elevations, obstructions like boulders and downed trees, and water features like pebbled streams and small ponds. A human mountaineer accompanies each dog, and only one dog runs the five-mile course at a time to avoid conflicts and distractions. Judges at the end of the course measure the speed of each pup, and an overhead drone captures imaginative or artistic skills, which account for 25 percent of the final score.

Swimming is the Portuguese Water Dog's arena, but any dog is permitted to compete in this one-quarter mile event. Races are categorized by dog size from small terriers to German Shepherds and Rhodesian Ridgebacks. This event features one dog at a time to minimize distractions. Points are given for speed, style, and the artistic value of the “shakeout” at the end. The gold is ideally given to the pup in each category that demonstrates excellence in all three areas.

This exciting race featuring Greyhounds is also one of the most pup-ular Doggy Olympics events. A stuffed rabbit at the end of a long, flexible pole is “released” at the same tie as a group of six dogs. Medals are based on the speed on the track and who finishes first. Points are also awarded for jumping over 3 hurdles placed around the course. Dogs who run through or around hurdles receive fewer points. The race is run by size categories: small, medium and large, and the hurdles are adjusted for size.

This event is limited to drooling doggos like Saint Bernards and Newfoundlands, although any breed may participate if their pet parents think they’re drool-worthy. A list of approved stimuli is given to each Parent to elicit drooling, and the drool string is measured for length. A dog is disqualified if they shake their heads to dislodge the drool string.

This event, open to non-Corgis as well, is measured for both speed and artistic butt-wiggle worthiness. The Corgi is thought to be the ultimate butt-wagger, but competitors include any pup that has a side-to-side movement when walking. Dogs are not permitted to run and human judges make their medal decisions based on walk speed and artistic value.

This is one of the most pup-ular events in the Doggy Olympics. Along with distance achieved, style is an important factor in determining who gets the gold. The Chesapeake Bay Retriever is currently the National Champion.

These are just a few of the events that might be featured at a Doggy Olympics! Keep your ears perked and your sniffer to the ground for news of the Canine Games! If you’re interested in learning more about the hundreds of different breeds and their all their incredible skills, visit Wag!