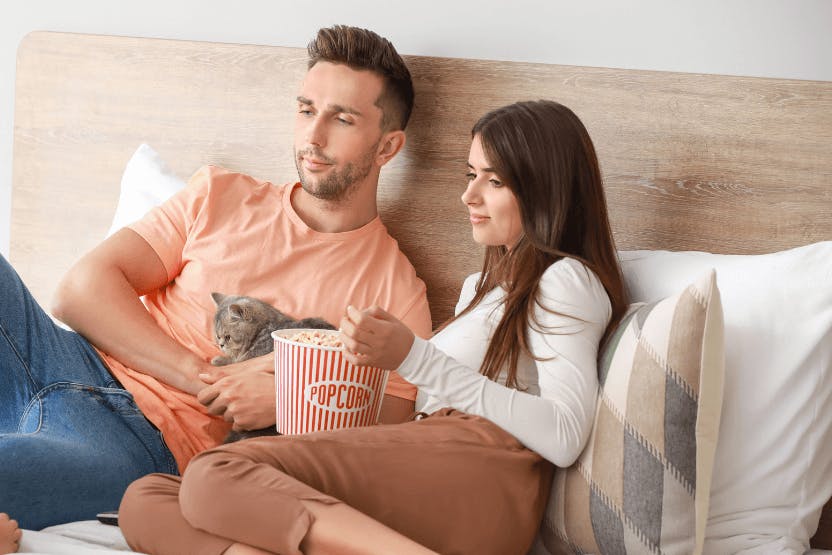 Watching a movie at home with your cat is a furrific way to spend time together. Regular quality time leads to a stronger bond, and there are few things better than cuddling up with your favorite feline. Pairing a sweet romance with some feline flair is the pawfect way to while away the hours with your furvorite four-pawed pal.

What should you watch for kitty movie night? Here are five family-friendly romances that your cat will love!

In this old Hollywood romance, Gillian Holroyd is a modern-day witch who becomes interested in her new upstairs neighbor, publisher Shepherd Henderson. After learning that Shep is going to marry her college rival, Gillian puts a spell on him with the help of her Siamese, Pyewacket. The spell works—Shep becomes smitten with Gillian and breaks up with his fiancee on the morning of their wedding. As Gillian’s familiar, Pyewacket appears in the film several times, perching on Gillian’s shoulder, jumping onto artifacts, and running across streets. It is reported that the role of Pyewacket was played by 12 different cats.

This romance drama takes place in rural France, where a mysterious woman named Vianne Rocher arrives in a small, old-fashioned village with her young daughter, Anouk. They open a chocolate shop across the street from the church shortly before Lent. Though the locals are initially surprised and skeptical, they eventually welcome the newcomers after trying their products. The feline star of this film belongs not to Vianne but to her landlady Armande Voizin; the white cat can be seen in the beginning when Vianne and Anouk stop by Armande’s house and again towards the end when Armande’s grandson goes to check on her.

In this hit bromantic comedy, nurse Greg Focker must meet and impress his girlfriend’s parents first before proposing to her. Unfortunately for Greg, his girlfriend’s dad, Jack Byrnes, has no plans of going easy on him. A former CIA agent, Jack is a judgmental tough guy, though he is protective of his daughter and dotes on his Himalayan cat, Mr. Jinx. The long-haired feline, who knows how to come when called, wave, and use a toilet, is a central figure in multiple scenes. Mr. Jinx was played by two different cats and Robert De Niro reportedly asked for the character to be included in more scenes.

This rom-com follows the coming of age story of Mia Thermopolis, an awkward San Francisco teen who discovers that she is the heir apparent to the throne of Genovia. She learns how to become a princess in the first movie, and finds out that she must marry in order to wear the crown in the second. Mia is accompanied by her tuxedo cat, Fat Louie, in both movies; he travels with her from San Francisco to Genovia by private plane, getting his own seat with a soft pillow. In the sequel, Fat Louie is treated to a castle-shaped cat tree and some ice cream upon his return to the castle.

In this live-action remake of the classic fairy tale, kind-hearted Ella is mistreated by her stepmother and stepsisters after her father unexpectedly dies. They prevent her from going to the royal ball, but she is able to attend with a little help from her fairy godmother. The family’s cat, Lucifer, is portrayed by a gray Persian and is first seen arriving in a carriage with them. Wearing a collar and walking on a leash, he enters the house with Ella’s stepmother. Lucifer appears a few more times throughout the film, though the character had a bigger role in the 1950 animated version.

Ready to enjoy a movie with your feline friend? Here are some tips for a pawsome kitty movie night!

What’s your favorite romance to watch with your cat? Drop a comment below or tag #wagwalking or @wag on Instagram.

Hilton expands its pet-friendly offerings across the U.S. and Canada

A Day in the Life of a Dog Trainer

A Day in the Life of a Cat Trainer

Doggy Movie Night: Top 5 Documentaries to Watch with Your Dog

Kitty Movie Night: Top 5 Documentaries to Watch with Your Cat

5 Ways to Spoil Your Weiner Dog on National Dachshund Day

Dog Walking 101: Get More Walks by Picking Up Dogs Anywhere

How to Start a Pet-Themed Book Club

How Do I Teach My Dog to Speak with Buttons? 8 Training Tips