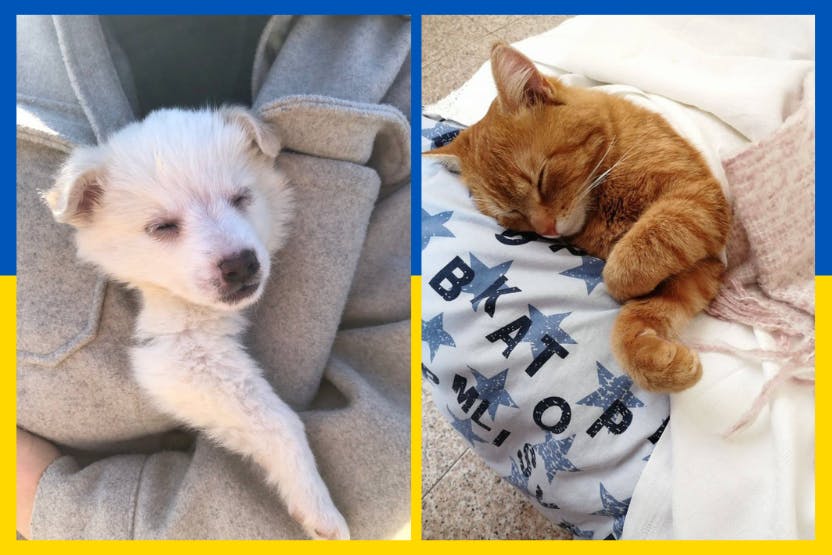 Polish pet sitting company Petsitters is one of the many organizations helping families with fur-babies evacuate Ukraine. So far, Petsitters has secured accommodation for refugees and their pets in France, Germany, and the UK. To help Petsitters achieve its goal of assisting 10,000 families, Wag! donated $5,000 to the company’s fundraiser.

Today, we’re going to meet 2 of the many Ukrainian pets rescued through Petsitters: Umka and Maru. Special thanks to Petsitters’ CEO, Evgeniya Goncherenok, for taking time out of her busy schedule to share these stories with us.

A Petsitters volunteer from Warsaw, Poland, fell in love with an adorable Ukrainian doggo who was being transported from Korosten in Ukraine. This white "fluffy little bear", as his new parents call him, made the 36-hour journey from Korosten to Warsaw along with 44 other pets.

The Petsitters team asked volunteers if they'd like to adopt one of the pets being rescued. This pup was the smallest and fluffiest doggo in the kennel, and Umka’s new pet parent fell in love immediately when shown a picture.

Even though the doggo arrived in Warsaw at 2 am, their new pet parent jumped in their car and drove straight to collect them. They named him Umka, after a famous cartoon polar bear, for his fluffy white fur.

However, after a vet visit, Umka turned out to be a girl! Her pet parents kept the name, though, and she lives happily at home with her older brother, Chima. Now, Umka finishes off Chima's meals and loves taking after-dinner naps. Check out Umka on IG for a cute video of her and her new brother playing!

Petsitters is working to rescue felines as well as canines from Ukraine. One "pawticularly" handsome little lion rescued from Ukraine made it all the way to the Netherlands!

Preparing for a new pet is always tricky, and it's especially hard when your four-legged friend is coming from a war zone 2,000 miles away. But distance was no obstacle for Almira and her family from Holland, who saw a gorgeous kitty called Tima online and knew they had to have him. Tima was abandoned by his original Ukrainian family, as they had to flee to the EU without him.

Petsitters found temporary housing for Tima from March 13 to March 18. Thanks to a volunteer in Poland who flew to the Netherlands to deliver several pets to their new families, Tima settled in well upon his arrival. (Although he wasn’t very happy about his vaccinations!)

Almira and her family renamed him Amidamaru, or Maru for short, after a character from the anime, Shaman King. His new family bought him a stunning red collar, and he has become a big part of the family. He has that typical cat curiosity and follows his new family wherever they go.

Wag! is proud to support Petsitters’ pet rescue efforts in Ukraine. If you’d like to lend a helping paw to pets in Ukraine, please consider donating to Petsitters’ fundraiser if you’re able, or share it on social media to spread the word.