The History of Doggy Dress-up 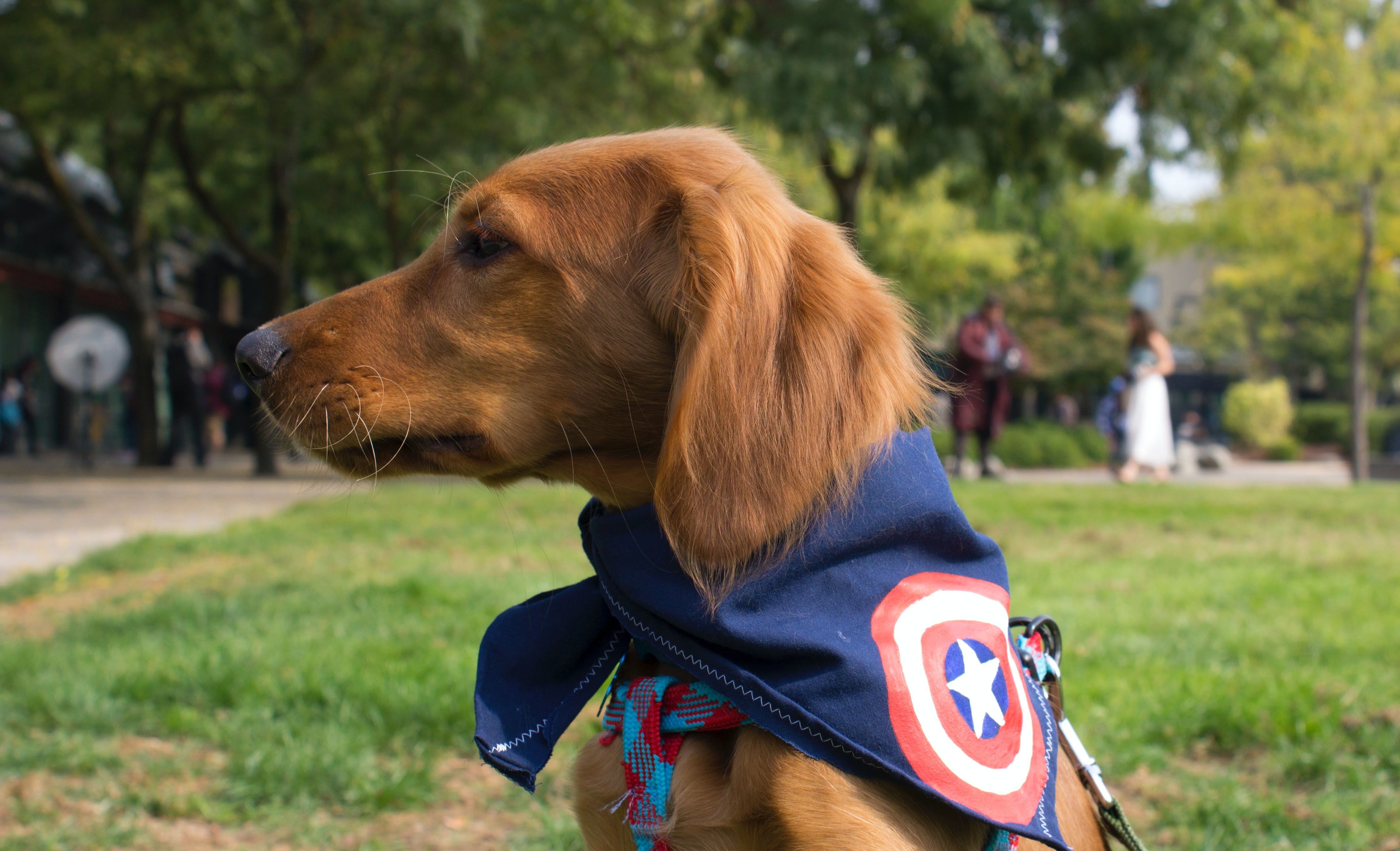 Humans have been dressing their dogs for centuries, most commonly by engraving their leather or precious metal dog collars and encrusting them with precious stones. In the 19th Century, doggy clothing became popular, and it continues to this day. There’s even a couture collection just for doggos. Read on to discover more fun facts about doggy clothing and tips for dressing up your dog for National Dress Up Your Pet Day on January 14th, 2022!

As you stand in front of a display rack at your local pet store, contemplating the seemingly hundreds of collars in all sizes and colors, you may wonder if dog decorations are a 20th Century phenomenon, or if they existed before. The truth is, dogs have been companions to people for 12,000 years, and the habit of decorating them has been in vogue for nearly as long.

For ancient Egyptians, dogs were hunters, protectors, and guardians, and their owners used collars for restraining the pups as well as for training. In addition, collars were status symbols, and their beautiful designs reflected the wealth and influence of their owners. Collars made of leather, gold, and precious stones, some inscribed with stories about their canine wearers, became commonplace.

Around 46 BC, Julius Caesar noted that his citizens were paying more attention to their dogs than to their children, and criticized the behavior. Louis XI in France had dozens of dogs, many of whom wore collars of gold encrusted with diamonds and rubies, and hung with small golden bells.

When was dog clothing invented?

In 19th century Britain, a spaniel belonging to Princess Victoria was described as wearing a “scarlet jacket and blue trousers.” In France at around the same time, dogs wore costumes for afternoon and evening social gatherings, travel, and to the beach. They had special bathing outfits with the name of the beach embroidered in gold on the side. Silk jackets and tea gowns were commonplace for aristocrats’ pups, along with traveling cloaks and embroidered coats.

Toward the end of the 19th century, questions about the ethics of dog dressing arose, and have continued into the 21st century. The Royal Society for the Prevention of Cruelty to Animals has even voiced its concerns. The organization believes that dog clothing should have a clear benefit to the dog. But should that preclude a garment from being beautiful or cute? Dogs are unaware of how they look, and as long as they’re comfortable and happy, clothing isn’t going to hurt them. And they may enjoy the extra attention and smiles.

Why do people dress up their dogs?

One theory about why pet parents dress up their pets is that people have a tendency toward putting human traits on objects and animals, a phenomenon called anthropomorphism. For them, dressing their dogs up is an example of bestowing human-like personalities on them. Also, when people are lonely, a pup may be their only companion and they need to get as close to them as possible and be part of a pack. But many others believe that dress-up is just plain fun!

Today, dressing canines for fun is in full swing, with many pet parents looking forward to almost any reason to celebrate with doggy outfits, costumes, and accessories. Whether it’s as simple as a bow tie clipped to the collar, a hat crowning a sweet face, or an elaborate costume for Halloween, many people enjoy highlighting their pups’ individuality and personality.

Some clothes for dogs are functional. Sweaters, raincoats, jackets, and boots are all meant to protect pups from the cold and other elements. But even these practical garments can have “indulgent” characteristics, like bright colors, patterns, and cute designs. The industry that manufactures canine duds is tuned in to the current trend of artful attention-getters. The right jacket or tutu can make even a sad-faced bulldog look adorably irresistible.

When National Dress Up Your Pet Day was first celebrated in 2009, lighthearted festivities and an opportunity for bonding were the main driving forces. The act of putting a piece of clothing on your dog may strengthen your connectivity with them. Other reasons to dress up your pooch might include:

The most important thing about doggy dressing is that the dog is comfortable with it. If they’re frightened by the clothes or the process of putting them on, it’s kinder to not dress them or to use just an accessory like a bandana to express their flair. Garments that restrict their mobility, irritate their skin, make it difficult to control their body temperature, or cause anxiety are better left in the closet.

Wanting to get in on the fun dress-up action? Here are some tips to make sure the dog costuming stays safe.

Not all dogs will enjoy dressing up, so be sure to watch your pooch for signs that indicate a personal preference to be clothes free, an uncomfortable fit, or a medical issue such as trouble breathing or overheating. If you note any symptoms of distress, remove the clothes as soon as possible. These can include:

Deciding whether to dress your pupster in clothes for fun rather than simply practicality is up to you. If Fido is happy and comfortable dressed up, and you enjoy showing them off, there’s no harm in being creative. If you haven’t experimented with clothes yet, National Dress Up Your Pet Day might be a good time to try it!

Share your dog's favorite costumes with us in the comments below or on social media!