The History of Pit Bulls 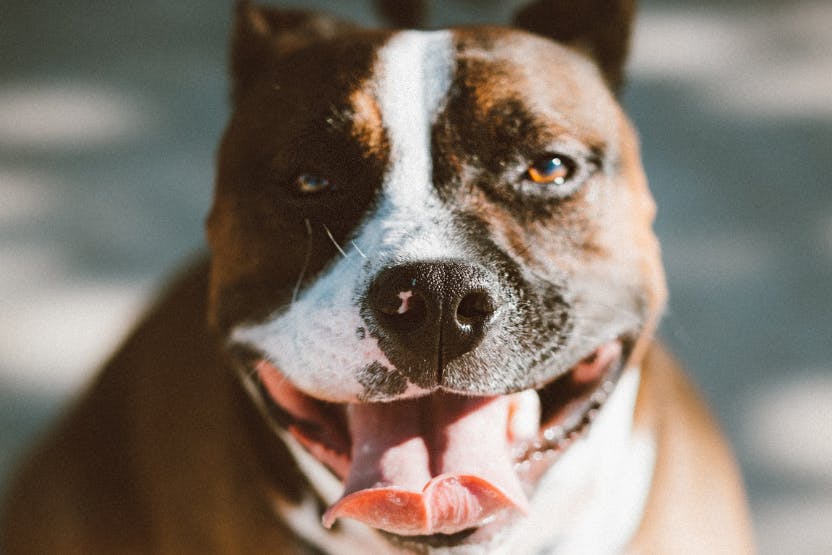 National Pit Bull Awareness Day, coming up on October 23rd this year, is a holiday founded in 2007 to promote understanding and appreciation of the Pit Bull breed. Unfortunately, there are several harmful stereotypes about the Pit Bull's heritage and temperament.

The Pit Bull Awareness Campaign is working to debunk those stereotypes and educate the public on this lovable breed. In honor of this holiday, we're bringing you the long and often misunderstood history of Pit Bulls.

What are Pit Bulls?

Contrary to popular belief, Pit Bull is not a dog breed. “Pit Bull” is a catch-all term for dogs believed to be full-blooded or mixed with one or more of the following breeds:

People use the term "Pit Bull" very loosely. Often, dogs of unknown origin with large, square heads, short coats, and broad bodies are lumped into the Pit Bull category. The AKC doesn't recognize the Pit Bull as an official breed, although it does recognize AmStaffs, Bull Terriers, and Staffies.

The Old English Bulldog got its name from being forced to participate in the brutal sport of bull-baiting. During a bull-baiting match, Bulldogs would be placed into a pit with a tethered bull and fight to the death. Britain officially outlawed these bloody spectacles in 1835, but the cruel practice just evolved. Instead of setting Bulldogs against bulls, people began arranging dog-on-dog fights and using Bully breeds for rat-baiting.

Pit Bull breeders used selective breeding to ensure a high prey drive and an affectionate disposition to their handlers. Any sign of human aggression was a death sentence for these dogs since breeders didn't want this trait to continue in the bloodline.

Outside of their role as fighting dogs, Pit Bulls were known as loyal and protective companions and were even nicknamed the "Old Family Dog". In the 19th century, Pit Bulls from Ireland and England made their way to America. These dogs bred among each other and produced what we now know as the American Pit Bull Terrier.

The history of Pit Bulls in the workforce

After the introduction of Pit Bulls to America, the breed quickly found their place in society. The breed excelled as herding animals and hunting companions. In World Wars I and II, Pit Bulls were used by the armed forces to help in combat missions — the most well-known of these dogs was Sgt. Stubby.

Sgt. Stubby was awarded numerous medals for his honorable military service, which included apprehending enemies and warning his squadron of chemical attacks. Because of their heroic actions, Pit Bulls became an American symbol and featured in propaganda material.

In more recent years, Pit Bulls made their way into the police force, working as drug-detection dogs. While German Shepherds are still the most popular breed for police work, Pit Bulls and Pit Bull mixes are becoming more and more common. Besides being cheaper to acquire than other breeds, shelters are full of Pit Bulls, and some nonprofit organizations will even pay for rescued Pits to undergo police training.

While their use in the police force is relatively new, Pit Bulls are already making waves in the law enforcement community. In fact, Texas record credits a rescue Pit named Popsicle with locating the largest stockpile of drugs in the state's history.

Pit Bulls are highly receptive to training and often excel as service dogs and search and rescue animals. The Pit Bull’s friendly disposition and loving nature make them great candidates for therapy work as well.

Recently, Pit Bulls have become a primary target of breed-specific legislation. At the time of writing, more than 700 US cities have introduced legislation that either regulates ownership and breeding of Pit Bulls or prohibits the breed altogether.

These laws stem from cases of dog attacks believed to be perpetrated by Pit Bulls. However, due to the broad definition of "Pit Bull", there's no way to tell exactly how many of these cases were actual Pit Bull bites. According to a study by Florida State University, half of shelter dogs that staff labeled as Pit Bulls are not actually Pit Bulls.

Sadly, discrimination against Pit Bulls is nothing new, and the media has long mislabeled them as aggressive due to their history in the fighting ring. The truth is, any dog is capable of biting — regardless of their breed. When trained correctly, Pit Bulls make loving, faithful pets and wonderful assets to the workforce.

Pit Bulls have faced much adversity over the last two centuries. Even now, many cities across the US have outlawed them. Still, these buff cuties have quite the following of loyal breed lovers. If you want to learn more about these adorable fur-babies, check out these pawsome Pit Bull facts!

Are you the proud parent of a Pit Bull? We'd love to see pics of your baby! Head over to our Instagram and tag #wagwalking, or share pics of your Pit Bull babies in the comments!