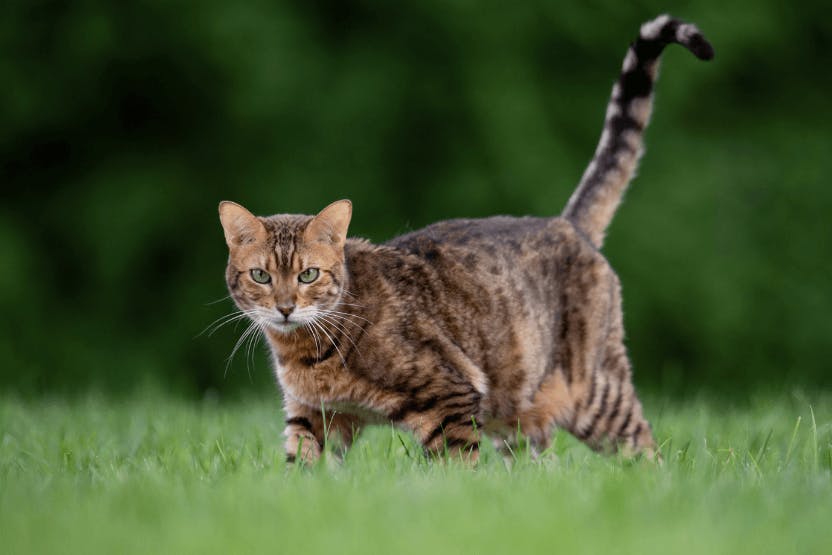 Like most pet parents and animal lovers, when you see a cat without a home, your heart goes out to them. These kitties may be sick or injured, they may be lost, or could even pose a danger for the other animals in the neighborhood. They could have a family looking for them, or they could also be living their best life on the streets with their gang of feral friends.

Before taking any action, it’s important to find out if they’re stray or feral. But how can you tell the difference? Let's take a look at stray cats and feral cats and how you can decipher which ones are which.

What is a stray cat?

A stray cat is a feline that used to have a home, and was at some point socialized to humans. They may have at some point escaped, gotten lost, or were abandoned. Depending how long ago they left or lost their indoor home, they may not be dependent on humans anymore and could even have slowly become feral.

There is hope for many stray cats to be re-introduced into a home. They probably had some wild adventures, possibly some trauma, and may have forgotten some basic indoor petiquette. Just like any cat that experiences a major life change, they may be frightened at first and take some time to re-acclimate to the home. They may also be wary of humans for a little while.

What is a feral cat?

A feral feline is untamed and evasive. They have either never had any contact with humans, or it’s been so long since they’ve had contact that they’re not socialized anymore. It’s not impossible to adopt a feral cat, but they’re less likely to ever enjoy being indoors or snuggling up with humans.

There was a recent study done to understand the secret lives of feral cats where they placed radio transmitters on the furry little adventurers. The scientists discovered that feral cats had vast home ranges, some up to 2 square miles. They covered prairies, forests, farmlands, and grasslands. In the winter, they preferred more sheltered spaces, like forests and urban areas.

It’s understandable that a feral cat would really struggle to adjust to an indoor life after all that freedom. You may have a chance of domesticating a feral kitten though. It’s generally easier to try and socialize a feral kitten younger than four months old. From four to eight months, there is a gray area where they’ve started developing their personalities and they may start getting difficult to domesticate.

How to tell if a cat is stray

It can be difficult for many people to discern if a cat is simply a stray that has wandered from its home or was abandoned, or if it's a wild animal that has never lived indoors. Knowing how to tell if a cat is simply a stray can make all the difference in getting them to safety, returning them home, or finding a foster or furever home for them. Here are some simple behavioral signs to help you know when a cat is a stray.

A stray cat has at some point been socialized with humans. Usually, they will come up to you with some coaxing, even if they’re a little shy. any head rubbing, tail rubbing or meows to you often indicate a deep familiarity with people and a need to be reassured by them, something feral cats simply do not have. You could try to very carefully approach a stray cat with some food or treats, and water. It’s safe to say that if this lost kitty is friendly, not afraid of you and can eat with you near them, it’s a stray, not feral.

In the wild, cats don't make a lot of noise because it helps them stalk their prey. Even big cats don't often make a lot of noise past kittenhood when they vocalize their distress to their mothers. Domestic cats, however, often keep many traits from kittenhood, and vocalize to communicate with their humans all the time. If the cat is taking to you, chances are it's used to a home and humans.

Stray cats tend to be alone, as they haven’t joined any kind of outdoor colony with other cats. Cats are social creatures, but a stray cat has adapted to get their social fill from humans, not from other cats. If the cat is alone, there’s a chance that it’s a stray, but it could also just be a lone feral cat.

Hangs out near houses

Stray cats are more likely to approach or live near houses, porches and backyards than feral cats are. They also might seem a little more lost, versus a feral cat that has a permanent home further from humans. If a kitty is often found roaming your yard, it’s likely a stray, not feral.

If the cat has a collar, it's obvious it's a stray. But most cat parents give their felines breakaway collars to ensure they don't trapped or injured, and often the collar has broken away during their time outside. In many cases, a stray cat can have an indentation in their fur where the collar used to be. A microchip is a small chip that’s inserted in the loose skin between a cat’s shoulder blades. Each microchip has an identification number that helps locate the pet parents. There’s no way to tell visibly if a cat’s been microchipped, but it can be checked at your local veterinary clinic or animal shelter. If the cat is microchipped, it’s definitely a stray, not feral.

How to tell if a cat is feral

Loving, friendly and curious behavior from a wandering kitty can be a good gauge that a cat is simply lost or has lost its home. But what about feral cats? Check out these signs of feral cat behavior to know if you have a wild cat on your hands.

A feral cat has not been socialized with humans. They’re usually very difficult to approach and are afraid of two-legged folk. They usually seem hyper-vigilant, as opposed to strays that are a little more relaxed. Feral felines won’t be asking for a belly rub any time soon, and will avoid your company like most wild animals you may come across.

Living alone or with other cats

A feral cat could be living alone, but because cats are social creatures, they often form colonies. They live together, raise kittens together, and share hunting territories. If you see some free-roaming cats grouped together, they’re usually ferals, not strays.

Feral cats usually show more nocturnal behavior than domesticated ones that have become used to humans' schedules. They instinctively like to hunt at night when their prey is most active. You may see them or hear them yowling the most at dawn or dusk. This pattern also helps them to avoid humans a little better.

An ear tip referes to when about a centimeter of a feral cat’s ear is surgically removed during the spaying or neutering procedure. It indicates that they’ve been part of the trap, neuter, release (TNR) program for feral cats. It’s not something that’s done to friendly outdoor cats, barn cats or housecats. Rather, it’s a humane procedure that helps make sure people know that this feral cat doesn’t need to be trapped and brought to a vet again because it has been fixed and will not add to the cat overpopulation in the area.

Tips for dealing with free-roaming cats

As we’ve considered, not all free-roaming cats are the same. Stray cats and feral cats have very different relationships with humans. What a feral cat needs is different from a stray, and it definitely changes the way that you would want to interact with them. Before taking any action, it’s important to try and figure out if it’s a lost stray, or an independent feral cat. After that, here are some tips for dealing with your neighborhood free-roaming felines.

Feral cats generally aren’t dangerous as they tend to avoid humans. However, with any free-roaming cats, there’s no guarantee when they last got their vaccines, or if they ever had gotten them. Since there’s a chance that they might have rabies, parasites, or highly spreadable diseases such as FIV or Feline Leukemia that can be transferred to your own cats, never reach out and grab a stray cat abruptly. Another good reason to give them some space is that they may see you as a threat and will defend themselves.

If you think that the cat you found is a stray, the best way you can help is by trying to find its original owners. You can do this by checking or posting advertisements at local animal shelters, vets, and in newspapers. There may be a pet-parent frantically searching for their lost cat of the same description. You may also want to ask your neighbors if they recognize the cat or know anything about it. Some communities have Facebook pages where you can post a picture of a stray animal that you found.

See if it’s sick or injured

If you’re concerned about the cat being sick or injured, you can call your local animal shelter and they may come pick up the cat. If the cat is a friendly stray, you may be able lure it closer and bring it to a veterinary clinic yourself.

If you’re happy to take responsibility for your backyard free-roaming cat, you can leave out fresh food and water for them. Try to keep the feeding area clean so it doesn’t attract insects. By putting out food on a schedule, it might stop them from going into trash cans because they’ll have another reliable food source.

Even though free-roaming cats are pretty tough and used to the outdoors, they still need somewhere to go for shelter during the frigid winter months. Providing a DIY winter shelter can be pretty simple and cheap, with just a plastic bin and some styrofoam. If you’re willing to spend a little more, an insulated doghouse would be purrrrfect.

“Trap, neuter, release” says it all in the name. During this initiative, feral cats are humanely trapped in a given neighborhood and brought to a vet where they can be spayed or neutered and vaccinated. When they recover fully, they can be returned to their colony in the wild. It’s been a practice for decades in the US, and has shown to improve the lives of feral cats and improve their relationships with humans, as well as slowly decreasing their population in the area.

All animal lovers feel some concern when they see a new feline friend roaming the streets. Take some time to find out if the kitty is stray or feral so you understand how to help it best.

Got more questions about feral and stray cats?  Chat with a veterinary professional right meow to get the lowdown.