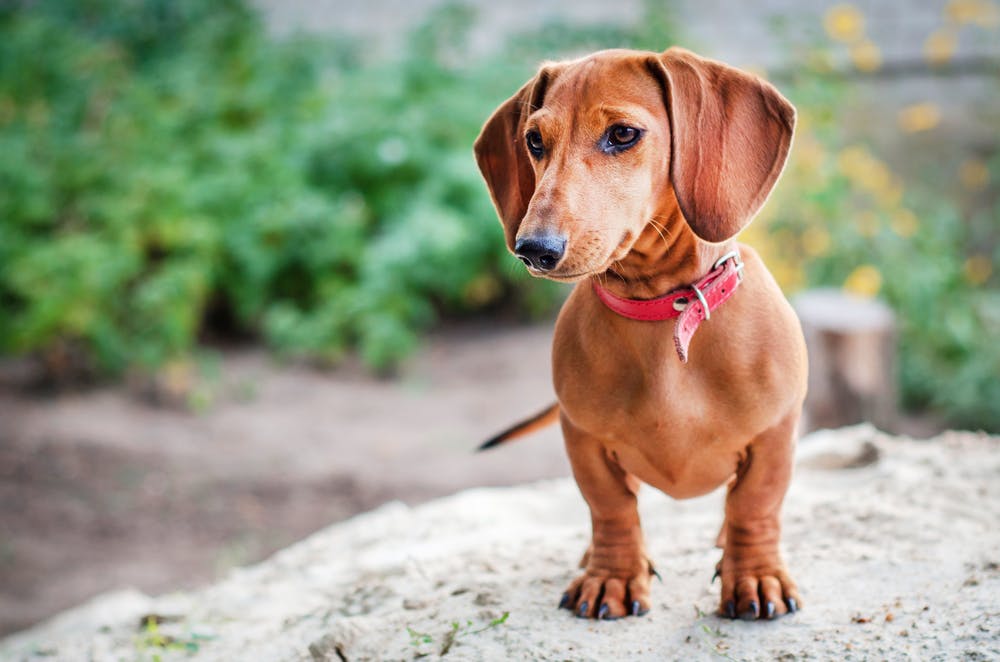 They're cute, long, and have the attitude of a dog 5 times their size — if you guessed we're talking about the Dachshund, you'd be correct! The Dachshund is one of those unmistakable breeds that's easy to spot and even easier to love. This small breed has a long history of being popular hunting companions, watchdogs, and pets — and for a good reason. This breed is fiercely loyal and makes wonderful pets. Let's explore some fun facts about Dachshunds.

Dachshunds were born to be hunters

The word dachshund means "badger dog" in German, and the breed is true to its name. The tiny but mighty standard Dachshund was notoriously good at catching badgers burrowed in their holes. But badgers aren't the only animals Dachshunds are good at hunting. Groups of Dachshunds have taken down larger adversaries like wild boar too. The miniature Doxie's small size doesn't stop them from catching small game like rabbits and squirrels.

One size doesn't fit all

Dachshunds come in 2 sizes: miniature and standard. The AKC considers Dachshunds 11 pounds or under as miniature, whereas Doxies weighing between 16 to 32 pounds are standard. The standard Dachshund was the original breed, and the miniature varieties didn't come about until later on.

The Dachshund has been around a long time

The breed first emerged in the early 1500s, but it wasn't until 100 years later that they earned the name "Dachshund". Doxies were one of the first 14 breeds recognized by the AKC. The Dachshund took its place on the registry in 1885, one year after the organization's founding.

The popularity of this breed declined during World War II, as they were used as anti-Germany propaganda. Propaganda posters emblazoned with the Dachshund's image would proclaim, "We love dogs, but not this one," and propaganda literature would liken the German kaiser to a rabid Dachshund.

While this wasn't a good look for the docile Doxie, their popularity would once again soar in the years that followed the war. To help overcome this stigma, the AKC nicknamed the German-born pooches "liberty pups."

They're really good at the sport Earthdog

The Dachshund's knack for digging makes them pros in the earthdog world. If you're unfamiliar with earthdog, it's a sport where dogs run through manmade holes dug in the ground to mark a scent. Dachshunds are naturals at earthdog and are one of the most common breeds used in these competitions — after all, it's what breeders bred them to do.

Their looks were purposeful

The Dachshund's "weiner dog" look is iconic, but breeders created the breed for function. Breeders favored their narrow, elongated bodies for navigating through small holes and floppy ears to protect their ear canals from dirt and bugs.

Did you know that the Dachshund descends from the Pinscher and the miniature French Pointer? The Dachshund inherited their looks and big personality too!

The Dachshund has a food named after them

It's thought that the hot dog's name was coined because of the iconic looks of the Dachshund. As the story goes, hot dogs were originally called "hot Dachshunds," but a sports cartoonist named "Tad" Dorgan had a hard time spelling it. So Tad nicknamed the food "hot dogs," and it stuck.

They're a queen's favorite

The breed garnered popularity in early 19th century Europe after Queen Victoria expressed them as her favorite breed. To quote the queen, "Nothing will turn a man's home into a castle more quickly and effectively than a Dachshund."

As you can see, Dachshunds have had their fair share of adversity and fame over the years. Their popularity has plummeted in the past, but they could never stay down for long with those looks and that personality.