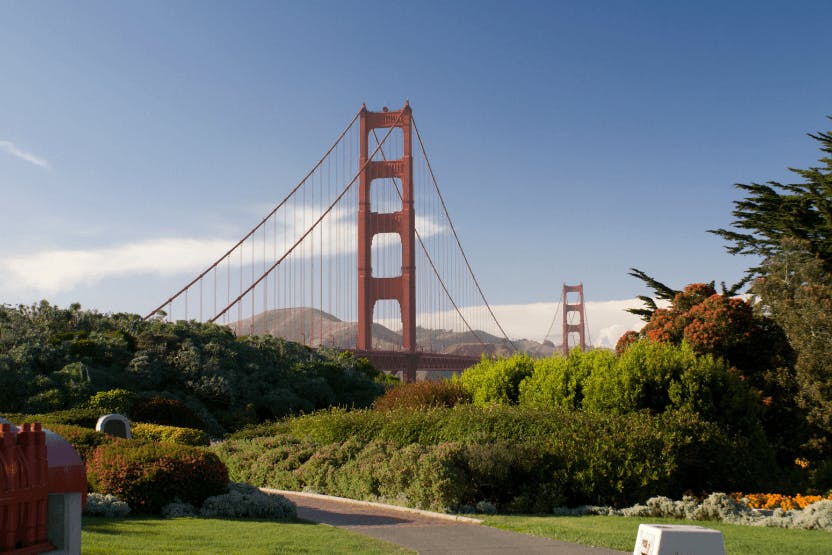 San Francisco is often recognized as one of the most dog-friendly cities in the country, which is hardly surprising for a city where dogs outnumber children. SF is home to a number of places that welcome four leggers, including parks like Glen Canyon Park, trails like the Ecology Trail at the Presidio, beaches like Fort Funston and Ocean Beach, and restaurants like Zazie and Universal Cafe. Dogs are even allowed on public transportation!

The city also has dozens of dog parks where its canine residents can exercise and socialize without a leash. With so many options to choose from, deciding where to take your furry pal for an unfettered romp can be a challenge. Here are five of the best dog parks in SF that your pooch will surely love!

The large and sprawling Golden Gate Park has become famous for museums, trails, and lots of greenery, but it isn’t just for humans to enjoy. While this 1,000-acre oasis in the middle of the city offers numerous paved paths and trails that you and your pup can explore on-leash, it also boasts not one, not two, not even three, but four designated off-leash areas, proving just how much this city loves its pooches!

With a dog area tucked into several corners of the park, the largest and most pupular one is the Dog Training Area, located just behind the Bison Paddock in the northwest corner of the park. Here, big and small woofers can revel in their own turf and soft sand enclosures with plenty of room to let off some serious dog energy, while you relax on a bench and enjoy some sunshine far from the hubbub of the city. Golden Gate Park is ideal for pooches who love to make new friends and have lots of space to roam!

Douglass Park in Noe Valley offers a play area for your human children at the Douglass Playground. But if you’ve got the four-legged kind, head up one block to the upper section for the favorite stomping ground of many local canines. Known as the Upper Douglass Dog Play Area, this dog park features a large grassy field for tons of romping and meet and greet pawportunities, a short wooded trail along the perimeter to explore, and puptastic views of downtown.

Upper Douglass is such a furrific location that local groups often use it as a venue for breed-specific meetups—something that dogs and pet parents who are looking to expand their social circle will not want to miss! For an enclosed dog park that has pawmazing views, look no further than the Upper Douglass Dog Play Area!

Peaceful Pine Lake Park is home to Pine Lake, one of only three freshwater lakes left in San Francisco. It’s also home to a dog play area that’s often described as a gem by visitors. Located just west of the parking lot, it features a spacious grassy field where big and little pups can sprint around to their heart’s content. Although there are no fancy amenities here, the area’s expansiveness, fresh air, and outdoor feel have many two- and four-legged visitors returning frequently.

Like many dog parks in SF, this dog play area isn’t fenced, with most of it surrounded by tall trees that serve as natural barriers. If your pooch is still working on their recall, you can opt to keep them on a leash and go for a stroll by the lake and eucalyptus trees instead. Otherwise, the Pine Lake Park Dog Play Area is the pawfect place to let your dog let loose and be a dog!

Located in the classic SF neighborhood of Pacific Heights, Lafayette Park is known for offering puptacular views of the San Francisco Bay, Twin Peaks, and Alcatraz Island. For four-legged visitors, however, the best thing about this hilltop park is the dog play area in the southeast portion. Here, canines of different sizes mingle and play on an artificial turf surface with pretty residential buildings as the backdrop.

Pet parents like bringing their pooches to this clean and well-maintained doggie hotspot, as there are usually lots of dogs to play with. This dog park is most suitable for pups with reliable recall since it is not fully enclosed. With pawsome views and several friendly dogs, the Lafayette Park Dog Play Area is a great place for your furry pal to hang out!

Channel Street Dog Park is the place to be in Mission Bay for dogs. While this newer dog park may not be the biggest in the city, there is ample space for canine visitors to get the wiggles out and chase their new playmates on a soft turf surface. Its size also makes it easier for you to keep an eye on your furry charge.

Set amid streets and buildings, this fenced-in dog park is a small pupperdise in the middle of the city. Pet parents report that there are always a couple of dogs for their furkids to play with, though early morning, lunchtime, and late afternoon are the busiest times. If you’re looking for a dog park that’s modern, clean, and secure, Channel Street Dog Park may just be it!

To ensure that everyone has a pawsitive experience at San Francisco’s dog parks, pet parents are expected to abide by the following rules and petiquette:

And if Fido needs to learn some dog park petiquette, consider booking an in-home dog training session with Wag! before you visit.

What All Dog Walkers Need to Know About Dog Walking Equipment

What is Give a Dog a Bone Week?

How Do I Tell if My Dog is a Mutt?

Need a Pick-Me-Up? Check Out These 5 Incredible Mutts!

Wag! to Launch Community Shares Program for Pet Caregivers and Nonprofit Pet Charities with Help of Robinhood and DonateStock

How Greater Good Charities is Helping Rescue Pets in 2022

Kitty Movie Night: Top 5 Dramas to Watch With Your Cat

How to Enter Your Dog in Agility Trials

5 Easy Crafts to Make for Your Local Animal Shelter

A Day in the Life of a Dog Groomer