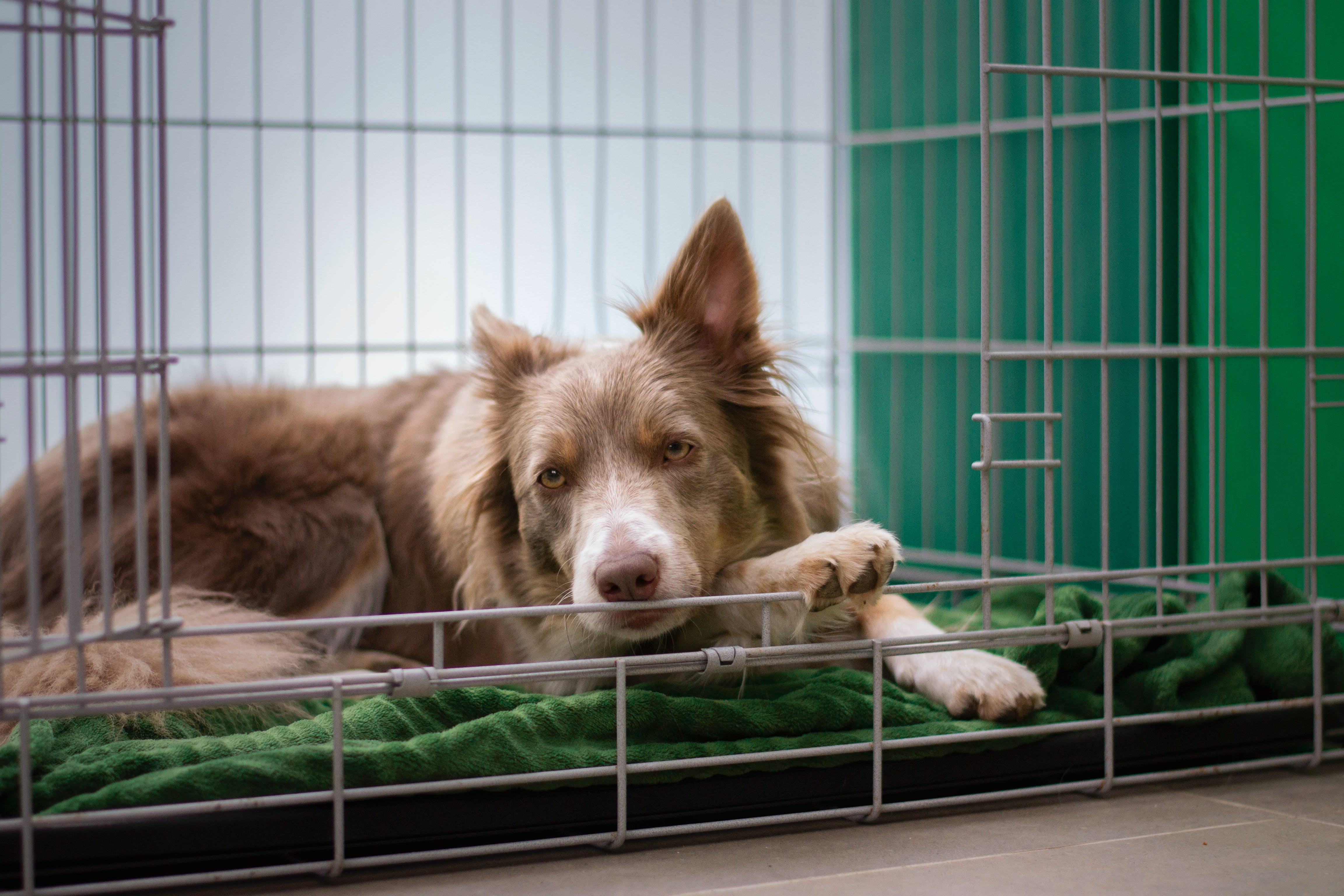 Crate training can be a wonderfully effective way of housetraining your dog. It also gives your pup somewhere they can feel safe and secure, and a place they can retreat to when they’re in need of some quiet time.

But if you’ve decided to crate your dog, it’s important that you take a few simple steps to make their crate as comfortable as safe as possible. Keep reading to find out about the 6 must-have items that can turn a boring box into an inviting place for your dog.

The first thing most people think of when setting up their dog’s crate is bedding. But while it can be tempting to set them up with a luxurious nest of blankets, fluffy towels, and plush cushions, this isn’t the best approach.

Dogs — and especially puppies — left alone in crates can be very prone to chewing blankets, towels, sheets, and the like. This can not only be frustrating and leave you with plenty of mess to clean up, but it can also be a serious choking hazard or cause intestinal blockages.

With this in mind, look for a bed that’s comfortable as well as durable. And if it’s machine washable, it’ll also be easy to clean should any unfortunate accidents occur.

OK, your dog likes to chew. So instead of letting them chew on their bed, why not give them something appropriate to chew on instead?

A couple of durable chew toys are a must-have item in any dog crate. They give your pup a safe outlet for their chewing behavior and help keep boredom at bay at the same time. And if they’re nice and durable, you won’t have to worry about them turning into a choking hazard.

On the flip side, it’s best to avoid plush toys or toys with pieces that could be broken off. While the idea of your pup snuggling up to their favorite soft toy may be adorable, it can also be quite dangerous if your pup decides to chew the toy.

While we’re talking toys, it’s also a good idea to include a puzzle toy in your dog’s crate. These interactive toys, such as those available from Kong, provide a brain-boosting challenge for dogs.

Simple put a few treats inside a puzzle toy and then let your dog spend some of their crate time working out how to release those treats and get a tasty snack.

This will relieve boredom and provide some much-needed mental stimulation for your pup. Even better, it’ll help them come to see their crate as a fun and positive place to be.

"Should I put food in my dog’s crate?" This is another common question among pet parents who are crating their pup for the first time. The answer is yes and no.

Leaving a full bowl of food in your dog’s crate while they’re home alone is not recommended. This can not only lead to a messy crate, but it could also mean your pup needs a bathroom break sooner rather than later.

However, as we mentioned above, giving your pup some treats inside a puzzle toy is often a good idea. Some pet parents also like to use treats, or even feed their dog dinner inside the crate, when they’re first introducing their pup to the crate. This will help your dog feel more comfortable in their crate and start seeing it as a safe place to be.

Your next consideration will be ensuring that your dog stays hydrated while in their crate. However, you might be surprised to learn that leaving a water bowl inside the crate is often not recommended. Not only can it be easily tipped over, resulting in wet bedding, but a constant supply of water will soon mean a full bladder — and that’s not what you want when you’re housetraining your pooch and teaching them not to go in their crate.

Instead, most of the time it’s best to ensure that your dog has access to ample fresh water outside their crate.

However, you may need to provide water in some circumstances, such as if your dog needs constant access to water due to some sort of medical issue. If that’s the case, you might want to invest in some sort of water bottle dispenser that won’t drip or cause any spills.

Last but not least, the final must-have for a comfortable crate is the right climate. For your dog to feel “pawfectly” at home in a crate, it’s obviously essential that they’re not too hot and not too cold, but just right.

For example, if you live in a hot area, putting the crate in a position exposed to lots of direct sunlight isn’t a good idea. At the same time, while adequate ventilation is essential, those who live in colder areas won’t want to situate the crate somewhere their pooch will be exposed to cold drafts.

Some pet parents will also question whether or not they should cover their dog’s crate at night. The answer: it depends. For some dogs, covering their crate can let them know it’s sleep time and also provide a greater sense of security, reducing their anxiety. But other dogs prefer to have a clear view of what’s happening nearby, so covering the crate can increase their anxiety.

So while it doesn’t qualify as a crate must-have, it’s something you may like to consider for your pup. Just make sure it’s not something they could potentially drag into the crate and chew to bits.

With a little bit of planning, it’s easy to make your dog’s crate extra comfy. And when your pup views their crate as a great place to be, the crate training process becomes a whole lot easier.