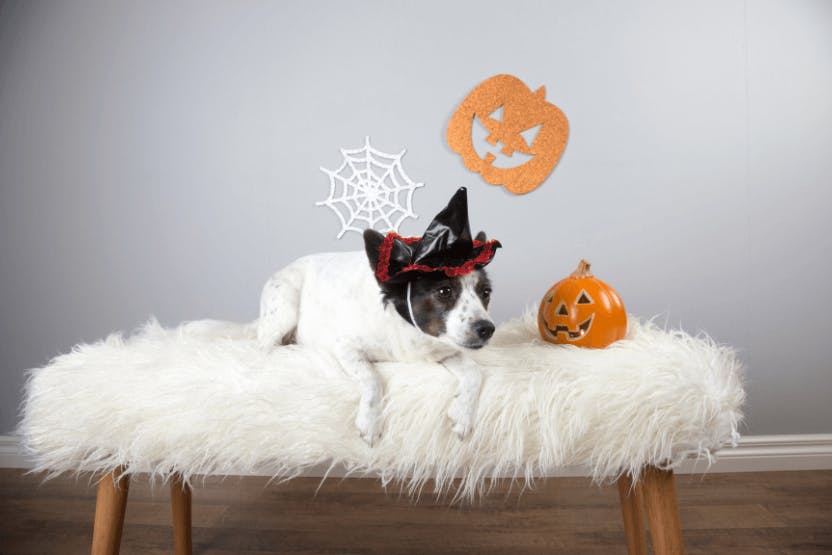 It’s the spooky Halloween season and watching dog thriller movies is a grreat way to get in the mood. Everybody loves Halloween movies about dogs, especially if the four-legged characters live! We’ve rounded up some of the best Halloween flicks to enjoy with your canine companion, from not-so-scary Scooby-Doo Halloween movies to hair-raising, spine-chilling horror films for brave souls.

So, get the popcorn ready, make some pup-safe hot "chocolates," and bring out your coziest blankets—it’s time to laugh, scream, or both! A word of warning, though: some of the descriptions below may contain spoilers!

The first live action film based on the popular cartoon series, Scooby-Doo sees the Mystery Inc. gang reunite after breaking up two years earlier. Fred, Daphne, Velma, Shaggy, and Scooby are invited to solve a mystery on Spooky Island, a horror-themed tropical resort. Resort owner Mondavarious claims that the visitors have been brainwashed, and he needs the gang’s help to figure out why they’re acting oddly. As the gang works to get to the bottom of the case, they encounter rituals, artifacts, and a number of strange things and characters—zoinks! Like the cartoons, the movie is filled with slapstick humor and funny moments, so grab your Scooby Snacks and settle in for some laughs with your pup!

Loosely based on Mary Shelley’s classic novel Frankenstein, Frankenweenie is a dark yet sweet stop motion movie that explores the relationship between people and their companion animals, particularly that of a lonely boy and his dog. Victor Frankenstein is a bright young student whose only friend is his pup Sparky. When Sparky suddenly dies, Victor tries to revive him using lightning—and it works! The cat is eventually let out of the bag, and Victor’s classmates demand that he teach them how to resurrect their own deceased pets. However, the experiments go awry and turn the animals into monsters who wreak havoc on town. It’s now up to Victor and Sparky to save the town of New Holland!

In this remake of the 1978 film, a nurse named Ana wakes up one morning to find her neighborhood being overrun by zombies. She escapes and meets other survivors, and the group decides to take refuge in an empty shopping mall. The canine star of the movie, Chips, makes his appearance when part of the group goes down to the parking garage to turn on the emergency generator. Chips is later seen in a sling, being lowered into a big crowd of zombies to deliver food to a stranded survivor. But don’t worry, zombies aren’t interested in dogs! This adults-only movie does contain a fair amount of violence and gore though, so you may want to cover your pup’s eyes during those scenes.

Another flick for when the kids go to bed, Poltergeist is about the supernatural encounters of the Freeling family, whose peaceful suburban home has been invaded by ghosts. Initially just moving objects around the house, the spirits end up terrorizing the Freelings and abducting their youngest daughter. E. Buzz the Golden Retriever, one of the first dogs in horror movies, appears throughout the film and begins behaving strangely as soon as something is amiss. He barks at the wall and acts as if he is obeying commands, but the humans shrug it off. When a team of paranormal investigators arrives, E. Buzz alerts them that the abducted little girl is still in the house. The loyal pooch stays by his people’s side even when all hell breaks loose and is seen checking into a hotel with the rest of the family at the end of the film.

In this Emmy-nominated TV family special, Linus writes a letter to the Great Pumpkin, whom he believes rises from the pumpkin patch on Halloween night to bring presents to good girls and boys. This leads everyone to laugh at and make fun of him, including Snoopy. Come Halloween night, Linus stays at the pumpkin patch, convinced that the Great Pumpkin will eventually show up. Meanwhile, the rest of the gang goes trick-or-treating and attends a party. Snoopy, who tags along with the kids, is dressed in his iconic Flying Ace getup. If you’d rather giggle than scream with your pup on Halloween, you can always count on the Peanuts gang to put you in a good mood!

Got more scary dog movies to recommend? Share them with us in the comments or on social media! Don’t furget to mention us @WagWalking on Twitter!