Flying with Your Dog on Southwest Airlines 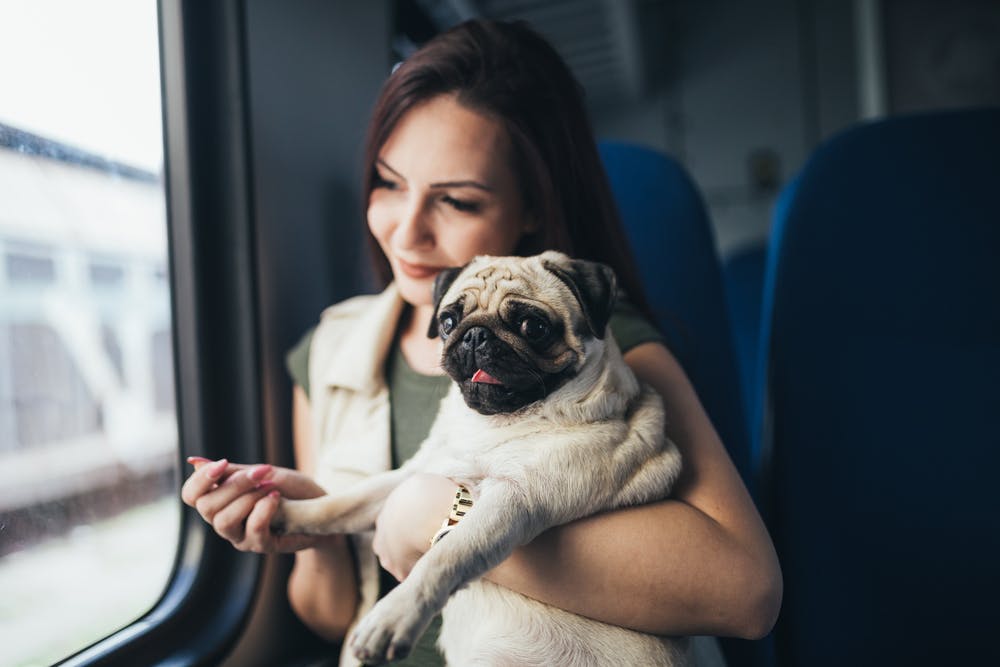 Airline travel with pets is more complicated than first-time flyers might think. Since there are no universal guidelines for pet travel and all airlines are different, it's up to the traveler to review each airline's pet policy and determine if their dog is eligible to fly.

Even if furry travelers manage to avoid exclusion because of their size, they can still be denied admission to certain destinations. Luckily, we're here to save you from hours of googling. Our pet-friendly airline travel guides are devoted to answering your most pressing policy questions to help you make the most informed decision "pawssible"!

Southwest Airlines’ pet policy aims to make domestic travel with pets easier than ever. However, there are some rules and regulations to be aware of before booking a flight.

Your pooch will be "pawsitively" delighted to hear that Southwest Airlines’ dog travel policy states well-behaved pups can fly alongside their owners in the cabin. The rules differ for service dogs and pets. While pet cats and dogs can travel in the cabin, they must remain in an airline-approved kennel for the entire flight.

Both civilian and law enforcement service dogs are allowed to ride in a seat outside of a crate as long as they don't interfere with other passengers. Keep in mind that pet carriers will count toward your two allotted carry-on items.

Police dogs may receive free passage, but these animals must also comply with the same behavioral guidelines that pets must follow. Dogs must be over 8 weeks old, clean, well-mannered, and never left alone or with a minor. Any sign of aggression will result in abrupt dismissal of your dog; this includes jumping, snapping, snarling, or growling. Dogs who are unreasonably vocal or are caught pottying inside the airport terminal will not be allowed to board.

Flying with a dog on Southwest Airlines means adhering to strict crate requirements. Your fur-babies must be stowed beneath the seat in front of you. Since it's such a small space, crates can be no longer than 18.5 inches, no taller than 8.5 inches, and no wider than 13.5 inches. Southwest's pet policy doesn't specify material requirements. The crate shouldn't leak and must have mesh or other openings for breathability.

Having trouble finding a carrier that meets these criteria? Southwest's online store has a branded soft-sided crate that meets these specifications. Southwest’s name-brand crate is slightly smaller than the maximum dimensions — something to keep in mind if your pup is on the larger end of the spectrum.

The Federal Aviation Administration regulations state that animals (crated or otherwise) cannot sit in the exit area. Pets in the exit row may impede passengers from exiting the plane quickly should an issue arise. Parents of crated pups must take a seat with under-seat storage in front of them since that's where the FAA requires carriers to be stowed.

To save on pet fees, you can put two pets of the same species in one cage, but both animals should have enough space to stand up, turn around, and sit comfortably. It's important to mention that a paying pet parent must accompany each crate.

Unlike some other airlines, you won't need a health certificate or proof of vaccinations when flying with a pet on Southwest Airlines. The only health-related requirement in Southwest's pet travel policy is that pets must be 8 weeks or older to fly.

Handlers of police dogs and other service animals may be asked to provide documentation such as a mission statement or immunization records.

Southwest Airlines pet policy states each aircraft can support a maximum of 6 cages at one time, but that this rule is subject to change based on the flight's capacity and availability. Rather than paying per pet, Southwest Airlines charges a $95 fee per crate, per flight.

Since space is limited, Southwest's policy recommends that pet parents secure their tickets and their pet's "seat" a couple of months before the scheduled flight. When you arrive for your flight, you'll visit the ticket counter to pay your pet fees. The counter attendant will check in your pet carrier the same way they would a carry-on bag.

Your pup must stay in the carrier at all times while inside the airport, security being the only exception. Security personnel will instruct you to remove your pet and walk them through the scanner while the crate is scanned with other luggage.

Due to Southwest's first-come-first-served pet policy, there’s a chance your pet could be turned away at the time of your departure. Thankfully, pet parents are eligible for pet fee refunds should Southwest postpone the flight or prevent your woofer from boarding.

Exemptions and Other Considerations

If you're flying with a dog and an essential piece of large equipment (like an oxygen tank or walker), you may have to purchase an extra seat.

Unfortunately, Southwest Airlines doesn't support cargo hold travel for animals on international or domestic flights. Depending on your pup's size and amount of luggage you're carrying, you can either check your crated pup in as a carry-on or purchase an additional seat ticket for them. However, this is only allowed on domestic flights. Alternatively, you can choose from other airlines with a cargo pet policy, like United Airlines and its Pet Safe program.

Sorry, international wayfarers — you'll have to look elsewhere for pet-friendly international flights. Like most domestic airlines, Southwest's pet policy prohibits pets on nonstop and connector flights outside of the US.

To transport your pup outside of the US, you'll need to secure your pup's ticket through a third-party shipper with certification by the International Pet and Animal Transportation Association. If this is your pet's first time flying internationally, be sure to check out these tips and tricks for airplane travel with dogs!