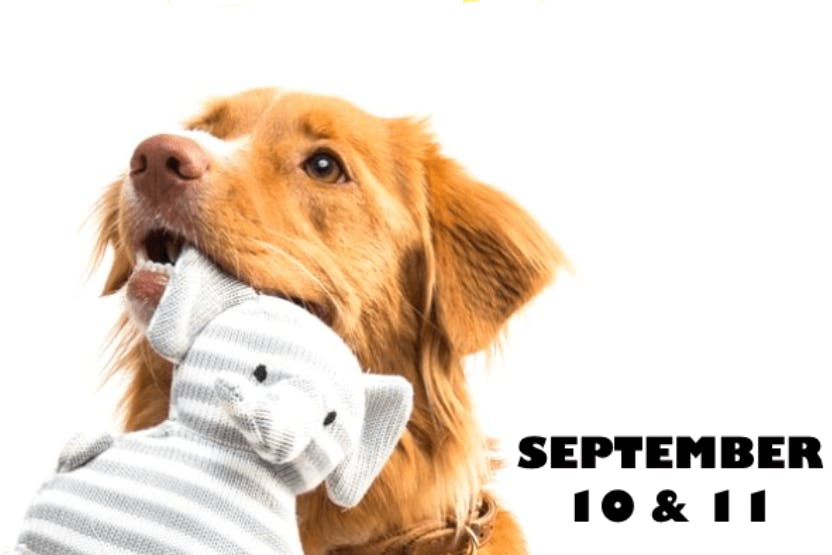 More often than not, scrolling through cute animal videos online rarely results in something productive. We laugh at one video, maybe watch it again, tap on the next clip, and repeat the process several more times before moving on with our day or finally hitting the sack past our bedtime.

For Marcus Terrell Smith, however, the time he spent scrolling through dog videos one night inspired him to write a musical, which went on to be recognized as one of the top eight new musicals in the United States for 2022! Best of all, it’s a musical about dogs!

A three-legged shelter dog and his chew toy

Pup! A Chew Story is a musical comedy about a tri-pawed Pit Bull and his chew toy. As the pair goes on an adventure to find their forever home in Hollywood, they poke their noses into various themes, including friendship, loneliness, disillusionment, transformation and liberation. Our unlikely heroes are also joined by several other canines, a few toys, a tiger cub and a couple human characters, all of whom are portrayed by some of the most talented local actors in Hollywood.

As mentioned earlier, Smith, who wrote the book and lyrics, came up with the idea for the musical after a night of scrolling through adorable dog videos on the internet. After seeing elderly and handicapable dogs living fulfilling lives thanks to some TLC, he knew that he wanted to tell the story of a tri-paw overcoming incredible odds.

Smith immediately reached out to his college friend and long-time writing partner Robin Schäfer for help with composing the music. With a pandemic looming and the duo being in two different countries, they wrote Pup! A Chew Story completely over Google Hangouts without ever working together in person! Smith would record his parts in the US and share them with Schäfer in Germany, and Schäfer would do the same. While it was definitely a collaborative process, it was also “a solitary endeavor” in a sense, not being able to create in the same space like we were used to, as Smith put it.

A staged reading was performed at The Broadwater in Hollywood in August 2021, and now, Pup! A Chew Story is ready for its big debut!

Dog lovers in Los Angeles are in for a treat as Pup! A Chew Story makes its debut in early September at the historic Montalbán Theatre in Hollywood. The show will be part of The Great Homecoming, a two-day musical pet adoption event—and the first ever in LA! The event aims to bring awareness to the overcrowding in LA’s animal shelters, and 15% of all proceeds will be donated to the local, participating animal rescues!

The Great Homecoming will kick off on September 10th with a pet adoption event at 3 PM, hosted in partnership with A Purposeful Rescue and the HIT Living Foundation. There will be six to eight adoptable pups in the theater lobby, and attendees can also help out these homeless pups by signing up to become volunteers and foster parents too.

Other activities that are happening at the adoption event include:

Pet parents can learn about the importance of microchipping and have their furbabies microchipped at the microchipping station on site. Then, join the mixer at 5:30 PM featuring Hera the Dog Vodka from the Animal Spirits Foundation for music and drinks before Pup! A Chew Story begins at 7:30 PM. Since only humans are allowed inside the theater, all dogs should head home before the show.

Day 2 will also begin with a pet adoption event at 3 PM, followed by a performance of Pup! A Chew Story at 6:30 PM. The Great Homecoming will then wrap up with an after-party at 9:15 PM.

Each night also features a raffle at intermission for prizes that include 5 Trill Paws dog tags, a Clearly Loved Pets dog pen, Geffen Playhouse tickets, and 4 Fi dog collars along with one-year memberships! Supporting pups doesn’t get much better than this!

How to get in on the Pup! action!

Want to be part of the first musical pet adoption event in LA? The Great Homecoming is happening on September 10th-11th at The Montalbán Theatre in Hollywood. The adoption event is free, along with some donation-based activities.

Get your tickets to Pup! A Chew Story for just $27 each, and don’t furget to use the promo code WAGTASTIC to get $2 off!

Wag! has also teamed up with the Pup! crew to give away two tickets to each night of the LA show along with more pawsome prizes, including:

This exciting giveaway will run from August 24 - 31, so be sure to drop by Wag!’s Instagram and Facebook pages to enter! Official giveaway rules can be found here.

What’s next for Pup!

Out of 480 submissions, Pup! A Chew Story was selected as one of the eight musicals that will be presented at the National Alliance for Musical Theatre’s 34th Annual Festival of New Musicals. As a result, the show will grace the stage at the New World Stages in New York City on October 20th and 21st.

If you’ll be in NYC in October, don’t miss your chance to see this puptastic musical live! Wag! Will also be giving away two free tickets to the NYC show, so stay tuned!

After the NAMT festival, Smith and Schäfer hope that Pup! A Chew Story makes it to a regional theater on Broadway. They also have plans to take the show on a US tour where they hope to again partner with different animal shelters to raise awareness on pet adoption and population control.

We can’t wait to see what the future holds for Pup! A Chew Story!

If you love pups as much as we do, show your support to shelter dogs by:

How to Get More Dog Sitting Clients on Wag!

7 Ways to Show Appreciation for Your Dog Walker