The History of Seeing-Eye Dogs 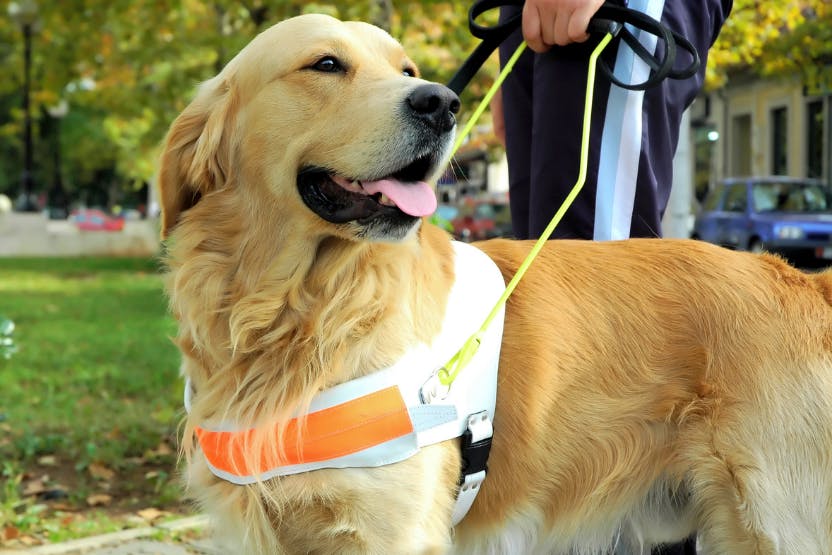 For tens of thousands of years, dogs have been by our side. There's no doubt our canine companions make our lives better, whether they're warding off danger, keeping us company, or helping us stay active.

Amazingly, our barking buddies have even learned how to act as one of our senses. Guide dogs have been making a difference for decades — there are now thought to be over 10,000 guide dog teams across the US, according to Guiding Eyes for the Blind.

January 29 is National Seeing-Eye Dog Day, so there's no better time to learn all about the history of these clever canines and how they've changed countless lives around the world.

When were the first seeing eye dogs trained?

There's evidence to suggest dogs have been leading people with blindness since prehistory. The earliest evidence of a dog leading a person with blindness comes from a first-century AD mural from the ancient Roman town of Herculaneum near Pompeii.

Organized attempts to train seeing-eye dogs didn't happen until the end of the 18th century. The earliest reported effort to train a seeing-eye dog occurred in 1780 in a Paris hospital. In 1788, a blind sieve-maker in Vienna successfully trained his Spitz as a seeing-eye dog.

By the start of the 19th century, academics had begun writing about the potential use of dogs as guides for people who are blind. In 1819, the Institute for the Education of the Blind founder, Johann Wilhelm Klein, wrote about the benefits of guide dogs in an education book for people with blindness.

Who trained the first seeing-eye dogs?

The modern history of seeing-eye dogs didn't start until the early 20th century. In the wake of the First World War, many soldiers were left blind. A German doctor, Dr. Gerhard Stalling, saw the potential benefits of training guide dogs after seeing interactions between soldiers with blindness and their dogs.

In 1916, Dr. Gerhard Stalling and the German Red Cross Ambulance Dogs Association opened the first seeing-eye dog school in Oldenburg. This was the first recorded attempt to organize and train multiple guide dogs according to a standard. Soon after, seeing-eye dog schools opened across Germany, teaching as many as 600 dogs annually.

Dr. Gerhard Stalling's schools shut down by 1926 due to the lack of trainable breeds. However, an even more successful school had opened at the time in Potsdam near Berlin, training as many as 12 guide dogs a month.

She was so impressed that she wrote an article about the school, which was published in the Saturday Evening Post in 1927. This article would play a key role in establishing guide dogs in the USA.

How did seeing-eye dogs become popular in the USA?

Morris Frank was a key figure in the popularization of seeing-eye dogs in the USA. A man with blindness, Frank had heard about Eustis's article on guide dogs and believed it could change the lives of people with visual impairments across the country.

Frank wrote a letter to Eustis, telling her how he'd like to help popularize guide dogs in the US. Frank traveled to Switzerland to train with Eustis and a guide dog named Buddy. He returned to the US with Buddy in 1928, who became America's first seeing-eye dog. During a press conference, Frank and Buddy astounded skeptical journalists by crossing a busy road without any issues.

In 1930, British women Muriel Crooke and Rosamund Bond contacted Eustis about guide dogs, and she sent over one of her trainers to train the first 4 British guide dogs. This led to the formation of The Guide Dogs for the Blind Association in the UK in 1933.

The Seeing Eye and The Guide Dogs for the Blind Association are still operating today, and there are hundreds (if not thousands) of seeing-eye dog schools globally.

On behalf of everyone at Wag!, a big thanks to every guide dog and trainer helping to make the lives of blind people better!

Think your pup has what it takes to be a seeing-eye dog? Check out our guide on training your dog to be a guide dog for people with blindness!