You’ve likely heard the age-old myth that dogs are color blind and see the world in only black and white. While this was widely debunked, there is still some confusion over what colors dogs do see. Less than humans but more than black and white, dogs’ vision lays somewhere in between.

Signs Your Dog Can See Other Colors

Have you ever taken your dog to a grassy field to play fetch with a red ball? It likely didn’t go as planned. Since dogs have difficulty distinguishing between red and green, in your dog’s eyes, the ball must have disappeared. The same goes for green light; if it camouflages into a green or red background, the dog will have difficulty seeing it.

Dogs see about one-tenth of the colors humans can see, are half as sensitive to brightness as humans, but can detect motion ten times better. This means that when you use a laser pen to create small, green light, your dog is likely to only notice it when the light moves.

They can certainly see the color of the light, however to your dog, it’s the same color as their red ball. Plus, it depends on the color of the object you’re shooting the laser pen at. It could blend into the background and virtually disappear to your dog. Since they aren’t as sensitive to brightness, the light of the laser doesn’t contrast against the darkness the same way it does in our vision as humans.

There are no visual signs that your dog can see green or not. It’s a matter of if they notice it at all, which greatly depends on the background it’s on and if it’s moving. In one video floating around the internet, a dog is shown waiting at a crosswalk intersection while the red hand flashes. The dog waits and only begins to cross the street when the green walking sign starts flashing. Is it because the dog knows green means go? Not exactly, the dog was likely trained to know that when the hand symbol flashes he should walk, and when the person symbol is highlighted, he must stay.

Some common signs to let you know that your pup can see colors include:

Other signs that indicate your pooch can see green are:

Early on in evolution, certain animals had large ranges of color recognition. Fish, reptiles, birds, and insects had a minimum of four color receptors/cones in their eyes. However, as the earth and its inhabitants evolved, the need for cones in certain species’ eyes decreased.

Dogs, for example, have historically been hunters and predators. The important task of hunting prey relied heavily on their strong sense of smell and natural motion detection. There was no need to see lots of different colors. So, over time, dogs and many other mammals had decreased numbers of cone cells in their eyes.

Contrarily, dogs evolved with more rod cells in their eyes which aided their ability to hunt. Since many hunting mammals would hunt after dark, it was critical to be able to detect motion in the still night and have above-average night vision. Dogs continued to evolve in this sense, and today they still have more rod cells than cone cells. Humans and primates, on the other hand, re-evolved the cone cells in their eyes to be able to distinguish many more colors. Although domestic dogs today don’t usually have to hunt, their genes are a result of evolution.

Humans have three types of cones in their eyes while dogs only have two. Since color detection is found in the cones, humans naturally see more colors than dogs. And, dogs will naturally have better night vision than humans.

Although dogs have a lower sensitivity to light, they have larger pupils than humans which allows them to absorb more light. Dogs also have a special membrane at the back of their eyeballs called the tapetum lucid. This membrane acts like a mirror; when light enters, it’s reflected out again for them to re-absorb. This is incredibly useful for their night vision and is often the reason your dog’s eyes seem to glow at night.

Although they lack the cones for light sensitivity, their large pupils and tapetum lucid make up for it. Even if they can’t identify the color, dogs can certainly distinguish light from darkness.

Some activities would be less confusing and stressful if you were able to compensate for your dog’s lack of colored vision. For example, dogs who compete in agility courses and shows will sometimes struggle with following signals and directions if the background colors blend with their owner.

One dog trainer discussed how the arena he would practice agility with his dog was made of wood and had a dirt floor- both shades of brown. He noticed that on days he wore his tan shirt, his dog seemed to follow his instructions less. After lots of frustration and research, he discovered that his dog simply couldn’t see his signals because he was blending into the background from his dog’s perspective.

To accommodate their vision, try to wear contrasting colors in your wardrobe, and in some cases, contrasting to the environment. When playing fetch on grass, never use a red or green ball because it will disappear into the green grass. Remember that a dog’s sense of motion is stronger than their color recognition - so a moving green light will be noticed before a motionless one.

How To React To Your Dog Seeing Green: 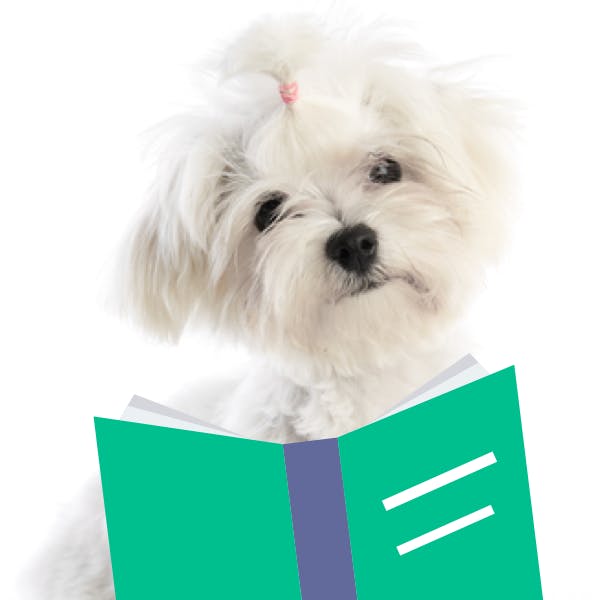