How to Safely Break Up a Dog Fight 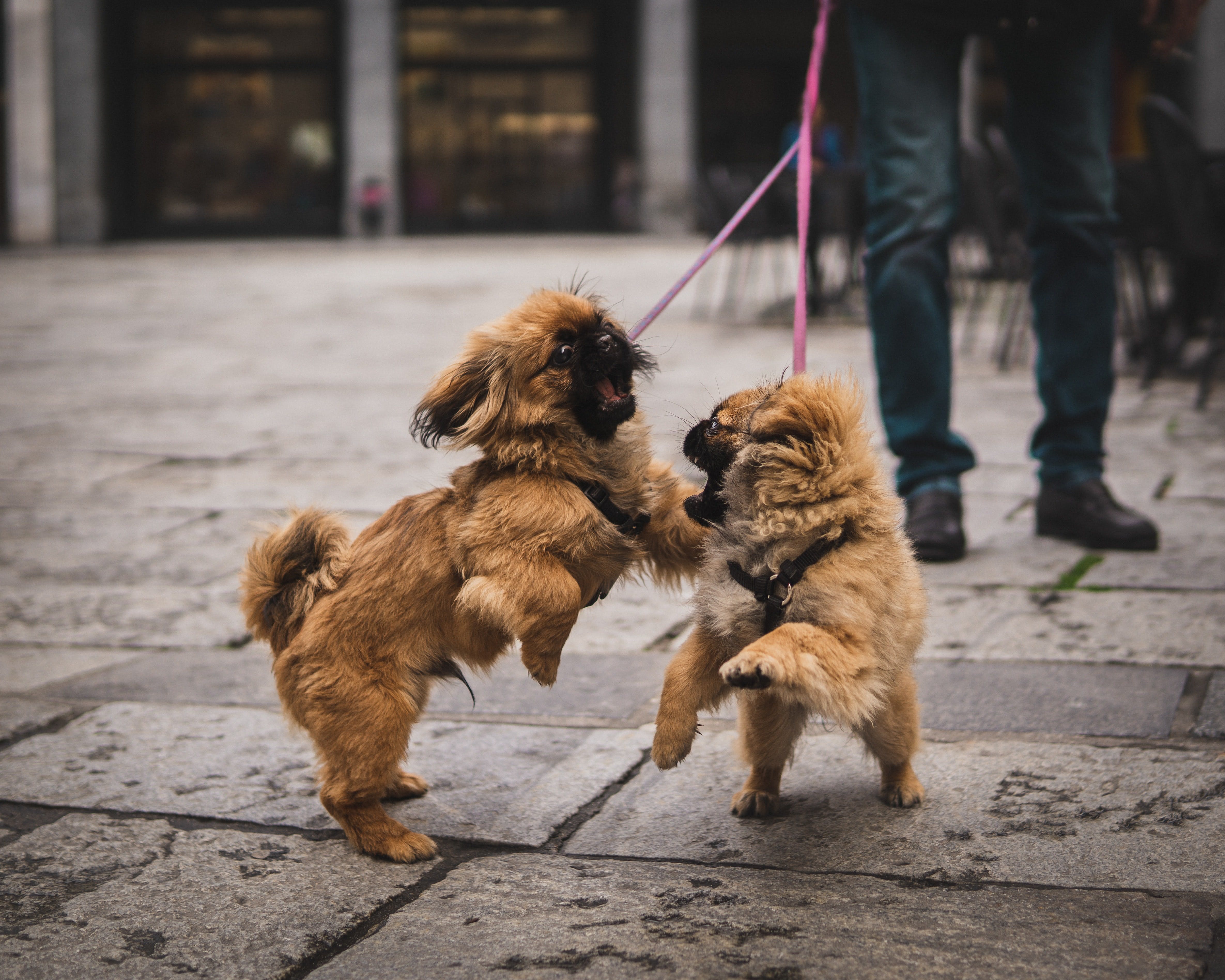 Updated: 8/24/2021
Dogs often bite and paw when playing, but sometimes, this playful aggression can turn into a full-fledged doggy brawl. Breaking up a dog fight can be risky business, especially with bigger dogs. When the fur is flying, it's hard to know what you're supposed to do. We'll explain how to break up a dog fight without anyone getting hurt and discuss prevention techniques to stop fights from happening in the first place.

Why do dogs get in fights?

Most fights take pet parents by surprise, and they seem to come out of nowhere — but there is almost always a reason for this aggression, even if pet parents don't see it. Dogs fight for all sorts of reasons, but most of these triggers can be divided into 6 categories:

One of the most common reasons fights break out is because they are guarding their perceived territory. A dog's territory could be their home or their favorite spot at the park — anywhere Fido considers "theirs".

Sexual aggression happens predominantly with intact males often occurs when there is an in-heat female nearby.

Overprotection or jealousy can be a significant factor in dog fights. This may happen when the pet parent pays attention to another dog, or when a strange dog wanders onto their turf.

Overstimulation is a top reason why playtime can turn into a dog fight. Dogs may be playing hard and become aggressive when they decide they're over playtime. Alternatively, dogs may get bitten too hard while playing and snap, triggering an all-out fight.

Redirected aggression occurs when dogs aren't getting what they want, and they snap at the closest target.

Tactics for breaking up a dog fight safely

Should your pups' playful romp turn ugly, try one of these tactics for safely breaking up a dog fight:

Focus on the dog who is at a higher intensity

Dog trainers recommend that you should focus your efforts on stopping the aggressor when breaking up a dog fight. When the dog isn't actively biting, pull back on their collar to remove them from the fight. Be careful when doing this because they could turn around and bite you unintentionally.

Sometimes, a little water is all you need to separate two fighting dogs. Spray the hose pipe or dump a cup of water directly in the dogs' faces. This will not hurt your dog — it will simply get them wet and hopefully stop the fight before serious damage is done.

Making a loud noise may help distract dogs from a fight. Try blowing a whistle or using a foghorn near the dog fight. Sometimes, a loud noise is enough to catch dogs off guard and break up an altercation.

Place something between the dogs

Placing a barrier between the dogs is one of the most effective ways to disperse a dog fight. A barrier can be any large object that you can fit between the dogs. Grab whatever sturdy item is closest — this could be a folding chair or a piece of cardboard. Even opening an umbrella between two fighting dogs can separate them just enough to pull them apart. Whatever you do, do not attempt to use your own body or limbs to separate dogs.

If you have another person willing to help, you can try the wheelbarrow method. The wheelbarrow method is probably the most successful tactic on this list. This method involves both individuals lifting under the hips of each dog and pulling them in the opposite direction from the other dog. Do not pull the dogs by the legs since this can cause injury to them and possibly you too if they turn around and snap at you.

Prevent fights before they happen by watching your dog's body language. Hair raising, growling, and lowering of the ears and tail are all signs your dog is uncomfortable and that you need to remove them from the situation. Keep your dog on a leash and harness at all times when out and about, especially if you know other dogs will be in the vicinity. A snug-fitting harness and quality leash will help you better control your pooch in escalating situations. Have your pet spayed or neutered to avoid sexual aggression.