A Day in the Life of a Police Dog 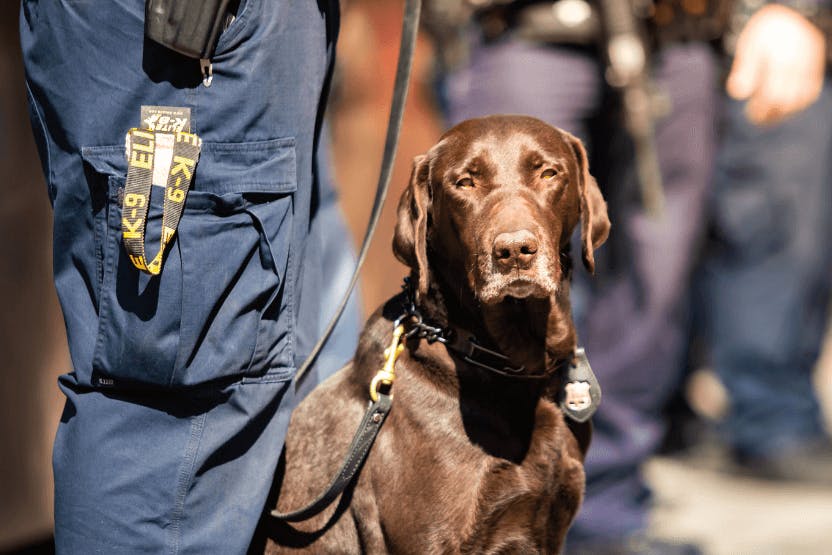 Dogs have been valued for centuries for their unique skills in protecting humans and facilitating our day-to-day needs. From protection, to messengers during wars, to herding our livestock worldwide, dogs have done a lot for us!

Today, police dogs are specially trained canines that assist law enforcement personnel. They make pawfect partners for federal agencies like the Drug Enforcement Agency, Customs and Border Patrol, and the Transportation Security Agency, and dogs have also become common adjuncts for state and local police. Let’s take a look at what a police dog does, what attributes they need, and how they learn to work as part of a K-9 team.

What are the best breeds and traits for police dogs?

Police dogs are typically large breeds, although some of the smaller dog breeds can be fierce and intimidating. The most common police dog breeds are German Shepherd Dogs, Dutch Shepherds, Belgian Malinois, Doberman Pinschers, and bloodhounds.  It’s likely you’ll also see Rottweilers, Labrador Retrievers, and American Pit Bull Terriers walking alongside a law enforcement officer. Almost any dog can fulfill a policing role, even if it’s just making a racket when they hear or see an intruder. Herding breeds also make grrreat canine police officers, and tiny pups like chihuahuas are successful at sniffing out drugs and explosives, especially in tight quarters.

Not all dogs in the breeds mentioned are pawfect for police work, however. They must first be tested for their personality and physical abilities to see if they are a good fit. Dogs who are typically chosen for police work show many of the these characteristics:

How is a dog trained to become a police dog?

For many years, police dogs in the U.S. were imported from other countries, until American breeders began to develop dogs with the necessary attributes, and schools were formed to train them. German, French, Belgian, and Dutch training schools that exported police dogs to America trained them in their home language and American K9 police officers learned to give commands in the language the dogs knew. In the U.S., police dogs are trained at specialized schools run by private companies, or by federal or local police departments.

Puppies intended for police duty begin obedience training at a very young age, from 2 months to 2 years old. Most police dog training is in two parts: dogs spend time at a dog training school, followed by another round of training with their handlers. The actual time varies among each school from weeks to months, and it's important for a dog and handler to train together to forge and maintain a trusting bond and build mutual loyalty. The handlers themselves also undergo formal education in social justice and police work.

One of the most important police dog duties is to defend and protect their handler. To cement the bond between the canine and their human handler, they live together 24/7. They're taught to attack on command, follow a trail, find and hold a suspect, and find lost or injured people by their scent, to name a few of their skills. They also learn how to dissociate from distractions when necessary. The primary training method used for police dogs is positive reinforcement using rewards, which is time-consuming but effective.

Some K-9s are dual-trained, meaning they can perform several different duties as necessary. However, dogs who are trained to seek out explosives or drugs are trained to find one or the other, not both. And training doesn’t stop when a pooch becomes a police dog – regular ongoing training sessions continue for both the canine and their partner.

The cost to purchase and train a single police dog can reach $15,000, not including maintenance costs such as veterinary care and food. Police dogs usually have careers lasting six to ten years. When they retire, they’re often adopted by their handler or another family.

What do police dogs do?

A police dog can do a lot of jobs, including and overlapping with those of search and rescue dogs and trackers. These highly trained canines can alert their human partners to a find by either sitting or lying passively where they find it, or actively barking and pawing at the object. In explosives detection, the passive alert is always used for safety.

Other duties of a police dog may include:

A typical day for a police dog may include an early drug and weapon sweep at a local school, followed by a response to a call for a crime in progress. Chasing and securing alleged perpetrators are a big part of their responsibilities. These dogs may also be used for guarding banks during money transfers, or patrolling prisons and other sensitive or vulnerable places.

A large part of their time with their handlers is spent waiting. Because of their specialized skills, K-9 officers and their dogs don’t go looking for things to do. Their expertise is very specific and they need to wait until a call comes in.

K-9 teams may be sent, typically after dark, to patrol a neighborhood or commercial site where crimes may happen or are suspected. They’re given the latitude to respond to anything illegal or that puts people in danger. Occasionally, they may spend an evening guarding a concert venue to protect performers and detect drug use, for example.

From time to time, a K-9 officer will be required to defend the team’s actions in court, especially if they have bitten someone while trying to restrain them. Court visits to testify against defendants or to clarify what was happening when someone was injured may include the dog, too. A judge or jury might be influenced by the polite, quiet pooch lying at their partner’s feet.

Dogs trained to assist K-9 officers in their day-to-day tasks are growing in number in the U.S. With the amount of violent crime also expanding, they may become part of everyday life for all of us.

Police dogs are just one of many working dogs, alongside therapy, disaster relief dogs and service pups. Think your dog has what it takes to be a working dog? Book an in-home training session with Wag! to see if your precious pooch is ready to use their skills helping others.