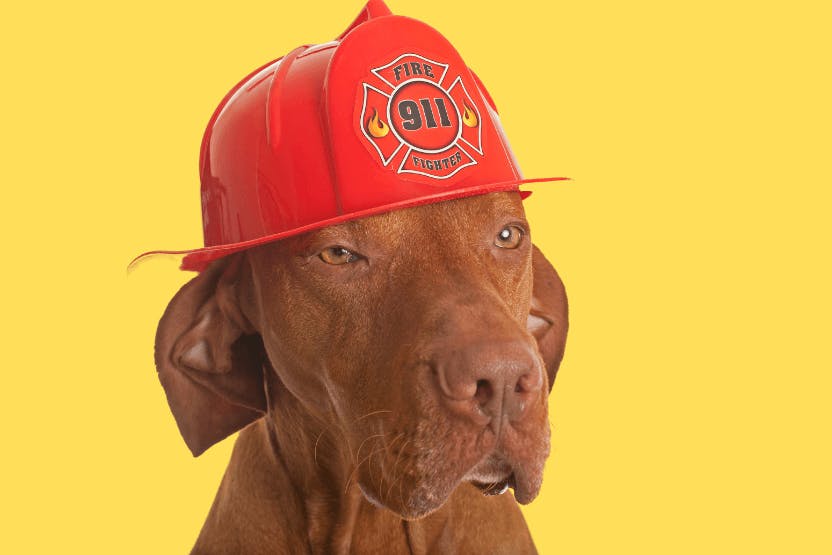 The image of a firehouse almost doesn’t seem complete without a Dalmatian named “Sparky." The kinship between dogs and firefighters is a “tail” centuries old. But is it really any surprise that man’s best friend would help out with one of the most heroic professions? The role that these fire pups play has changed drastically as technology has advanced, but firefighters have always embraced them as brave companions.

October 1st is National Fire Pup Day, and a woofderful time to celebrate some heroes and learn more about the canine contribution to fire safety. Let's take a look at what makes fire dogs so pawsome!

What are the most famous fire dog breeds?

By a landslide, the most famous fire dog breed is the Dalmatian. That's because these spotted beauties have a long legacy with the fire department. They started as carriage dogs and stable dogs in the 1700s, and were being used as carriage dogs by the FDNY as early as the 1870s. Back then, these courageous carriage canines would run ahead of the horse-drawn, fire equipment laden carriage as guards to help clear the way. Although it’s not scientifically proven, Dalmations have a reputation for getting along great with horses. They would often gravitate to certain positions next to horses while traveling and would even have a calming effect on their equine pals.

Over time, carriages turned into engine driven vehicles that no longer needed horses, and fire dogs began to pivot from working dogs to mascots of the fire department. These days, dogs from a wide variety of breeds can play various roles at the fire station.

Riggs the Bulldog is an unlikely, sleepy mascot for the Fire Factory Engine 58 Ladder 26 in NYC. Although he doesn’t usually go out on rides, he’s at the firehouse 24/7 and Instagram spreading positive vibes.

Sometimes a station's fire dog is even an adopted rescue from a fire. Jake’s story is sure to warm your heart.

Firefighter Bill pulled Jake the Pitbull mix out of a burning shed when he was only three weeks old. They formed an immediate bond, and Bill adopted him without question. Jake had burns on 50% to 75% of his entire body, so he needed a lot of care. Bill started bringing him to the firehouse so he could keep getting his treatments throughout the day, and he quickly became pals with the rest of the firefighters. Jake now proudly wears a badge as an official Firefighter and Mascot of the Hanahan SC Fire Department.

A day in the life of a fire pup

A fire pup is more than just a beloved mascot, although their cuteness definitely helps out with public image! They can have several useful skills that contribute to the team throughout their day, none of which, however, is actually battling a fire. They can live in the firehouse or with a firefighter and are a welcomed family member to the whole crew.

Many firehouse dogs accompany their human firefighter friends throughout their daily tasks, and act as a welcoming face to the public. Some of their additional jobs might include guarding belongings or hunting vermin inside the firehouse, or riding along to fires to guard over the truck.

Some pups that have this privilege of ride alongs are Teela and Truckie, the Fire Dals. This mother/daughter Dalmatian duo are beloved canine heroes of the Bay Area.

Pups can also put their skills to work when they’re trained as Fire Safety Dogs. These furry friends travel to schools and events to teach emergency preparedness. Seeing an adorable doggo “stop, drop, and roll” would definitely capture the attention of most middle school kids.

Molly the Fire Safety Dog might be the most famous of them all. Talk about technology changing the industry, in 2022 Fire Pups can even be influencers. She is a 2019 award winner of the AKC Awards for Canine Excellence, and she travels the US teaching children fire safety. She was even a background actor for the movie Super Power Dogs! Her Instagram is flooded with cuteness and reminders for things like checking your fire alarms and having home fire escape plans.

A post shared by Molly The Fire Safety Dog (@mollythefiresafetydog)

Pawsibly the most meaningful job a fire pup can have is simply being a companion for firefighters. Firefighters are first responders to emergencies, and commonly suffer from things like Post Traumatic Stress Disorder. It’s scientifically proven that just petting a pup can decrease levels of the stress hormone cortisol, and increase levels of the feel-good hormone oxytocin. Having a canine companion can’t undo the traumas someone has experienced, but it has the potential to make their day a little brighter and help them carry-on.

Twenty is such a dog. This gal was a gifted as a puppy to the FDNY Ladder 20 after they lost seven men while responding to the attacks on 9/11. Twenty helped these brave firefighters deal with the grief and loss of this tragic day and boosted morale. She was often seen riding in the truck on runs while sticking her head out the window to bark throughout her 14 years of service.

What other jobs can fire dogs do?

Since firefighters are first responders, they are often called to help in many different emergency situations other than just fires. Here are some additional jobs a fire pup could perform with the fire department, and the breeds that fit them pawfectly!

An Arson Dog is trained to sniff out accelerants (gasoline, lighter fluid, etc) that might have been used to start a fire deliberately. These dogs need to be highly food or treat driven and are often chosen from Retriever or other sporting dog breeds, such as Labrador Retrievers and German Short-haired Pointers.

These canine heroes search for people in the wilderness or in disaster areas. Medium to large dogs with lots of stamina and good temperaments make a good fit, like Labradors, Border Collies, and German Shepherds.

When you think of a tracking dog, you might picture Ol’ Trusty, the Bloodhound from Lady and the Tramp. This breed has a great sniffer for recovering people traveling on foot, like lost children, the elderly, or someone on the lam.

These are a type of therapy dog that can help people deal with the stress of a disaster. It’s essential that these furry friends are calm and well trained, with a good temperament and an inherent love of people. While you often see Golden Retrievers fill this role, many different breeds can be therapy dogs.

How much training does it take to become a fire dog?

A Fire Dog’s training depends on whether they’re a mascot and companion dog for the firefighters, or if they need a specialized skill to help in various situations. It could mean the difference between simply learning manners and a few fun tricks to teach fire safety, or sniffing out specific scents.

An example of a dog that needs to be trained in a specialized skill is an Arson Dog. They can sniff out tiny amounts of fire accelerants that machines can’t even detect. They also need to be skilled at navigating challenging environments. That requires a ton of training! These doggos usually come from police dog or guide dog programs that they weren’t quite the right fit for. The training usually lasts about three months, often longer. Even after that’s done, they need to have on-going training with decoy substances to make sure their senses stay sharp.

A technique for training these Arson Dogs is getting them to sniff a container with two drops of 50% evaporated gas in it, and then giving them a food reward. They are then taught a Primary Alert and a Secondary Alert. For the Primary Alert, the pup sits as soon as they find the fire accelerant. For the Secondary Alert, the dog tries to get their handlers attention by showing excitement, salivating, and pulling them towards the substance.

Are there fire dog training academies?

It takes a special pup to help out in emergency situations, and the right balance of temperament, ability and energy is essential. If you think your prodigy pup has what it takes, you can check out one of the many training academies throughout the United States. These academies are specific to the skill you want to train your dog, whether it’s scent detection or providing comfort.

ATS K9 has been training Dog Detectives for over 25 years, and are known internationally as leaders in the Industry. They specialize in training dogs to detect things like explosives, mold, cadavers, and fire accelerants of course. With ATS K9 it takes 6-8 weeks to train Accelerant Detection Dogs, and 7-10 days to integrate them and prepare for testing and certification.

Founded in 1993, the State Farm Arson Training Program has put more than 425 dogs and their handlers to work in 46 states, the District of Columbia and three Canadian provinces. Canines and handlers selected for the program will complete at least 200 hours of training. The program helps to train canines for agencies to combat arson fraud.

HOPE Animal-Assistance Crisis Response is an all-volunteer, non-profit organization. They train dogs to provide comfort and encouragement to those affected by disaster and traumatic events, like fires. They’ve been doing this free of charge since 2001. For your pupper to enroll, you and your dog need to have 12 consecutive months of experience volunteering in animal-assisted activities/therapy with a national therapy group. The program includes screening, a three-day training workshop, and continuing education.

Fire dogs have come a long way from protecting the carriage and horses. Today, these pawmazing pups can provide comfort, uncover arson, protect the fire truck while the firefighters battle a blaze, or teach us how to stay safe in case we are victims of a fire.

For this National Fire Pup Day, we honor these brave and loyal canine companions and thank them for their service to our communities.

Think your dog has what it takes to be a fire pup? Book a virtual or in-person training session to brush up on their skills!