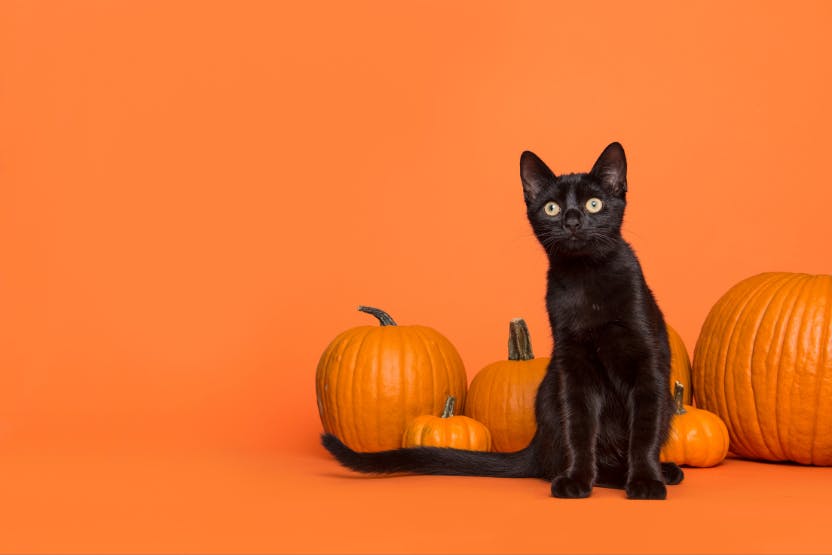 Cats have long been linked with Halloween. Black cats especially have been associated with witchcraft and satanism since the Middle Ages, and people believed black cats to be shapeshifting witches. Even today, some shelters won't put black cats up for adoption in October over fears they'll be harmed in rituals. Creepy!

From frightful family-friendly flicks to Stephen King classics, it's no wonder so many Halloween movies feature cats. Get ready for spooky season with Salem this year by checking out these 5 Halloween movies with cats!

Bizarre and beautifully animated, Coraline is perfect for families this Halloween. Based on a novel by Neil Gaiman, Coraline follows a young girl who, tired of her real life, finds a door to a parallel universe, where her parents are idyllic button-eyed versions of themselves.

Followed between realms by a talking stray black cat, Coraline quickly realizes things in the “Other World” aren’t as they seem, and she becomes wrapped up in a fight for her and her family's souls. Coraline is surprisingly spooky and is sure to give young kids some sleepless nights, so proceed with caution. You'll never look at a button-eyed rag doll the same again!

Scooby-Doo on Zombie Island is a "purrsonal" favorite of mine and is sure to bring back fond memories for pet parents of a certain age. Daphne rounds up the crew for a visit to Moonscar Island in Louisiana bayou, where pirate ghost Morgan Moonscar is said to be haunting a plantation.

Creepy capers with cats ensue, including the appearance of actual supernatural horrors in Scooby-Doo. It's one of the best animated Scooby-Doo movies around and is sure to delight the whole gang. You can even arrange a movie marathon with your mouser and catch the sequel, Scooby-Doo! Return to Zombie Island.

No list of scary cat movies is complete without mentioning Pet Sematary. One for after the kids are tucked into bed, Pet Sematary is based on a Stephen King novel and is a remake of a film from 1989. The movie revolves around a family living in a small town in Maine, which is home to a pet cemetery with a sinister secret.

Pet Sematary features arguably one of the most famous horror movie cats, Church. The 2019 version is widely regarded as a better adaptation than the original and will surely please any horror fan that loves the odd jump scare.

Hocus Pocus is perfect if you're looking for a bewitching watch for Halloween this year. This cult classic follows the return of three seventeenth-century witches to modern-day Salem, Massachusetts. It's up to brother and sister, Max and Dani, to stop the witches before the town falls under their spell.

The film features the iconic talking cat Thackery Binx, who's much more than just a feline familiar. Plenty of slapstick humor and even the odd musical number makes Hocus Pocus a delight for all ages. If you love the original, you can now catch the follow-up, Hocus Pocus 2, which was just released in time for Halloween 2022.

Ryan Reynolds in a black comedy about a serial killer with a talking cat and dog? The Voices might sound too good to be true, but it's an often overlooked flick that's ideal for Halloween. Ryan Reynolds plays Jerry, a bathtub factory employee with schizophrenia that stops taking his medication and hallucinates being able to talk to his cat and dog.

His cat urges him to kill, while his dog plays the good guy. The Voices is occasionally hilarious, always weird, and sure to leave you wondering what you just watched. It's great for anyone with a dark sense of humor looking for something outside their usual go-to horror films.

What's your favorite Halloween movie to watch with your cat? Let us know in the comments below, or tag us on Instagram @wag!