Kitty Movie Night: Top 5 Comedies to Get Your Cat Purring 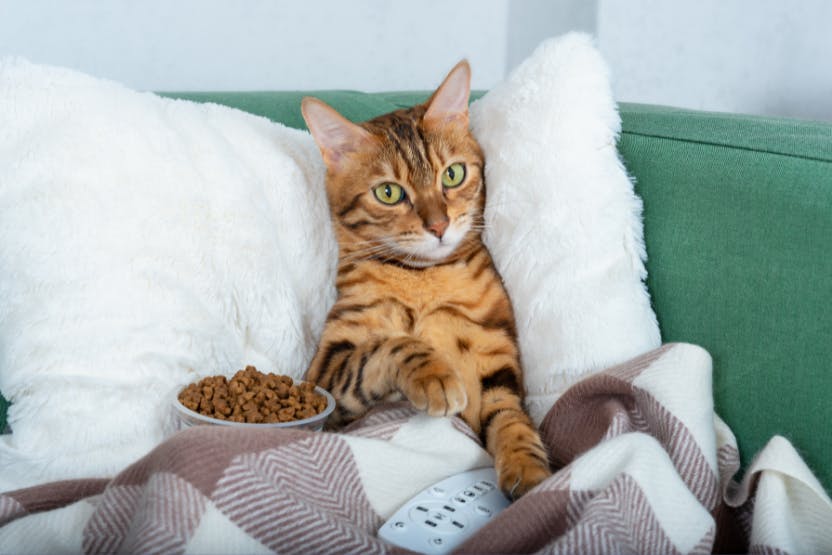 Date night with your cat? Why not grab yourself some popcorn, snuggle up on the lounge, and settle in for a movie marathon? It’s a great way to stimulate your bored cat, and our fur-babies make “purrfect” movie night companions — provided you can find a few films that you and your cat will both enjoy.

To help you plan your night of viewing, we’ve put together this list of the top 5 comedies that will have you and your kitty purring with delight. Some of the films in our list feature cats as the headline act, and some don’t, but all of them promise plenty of giggles.

So if you like having your funny bone tickled, let’s get into it. Right meow.

“Through the years I have been known by many names. Diablo Gato, The Furry Lover, Chupa Cabra, Frisky Two Times and then The Gingerhead Man. But to most I am Puss in Boots, outlaw!”

So sayeth the animated star of this DreamWorks comedy, a spin-off from the Shrek franchise. Voiced by Antonio Banderas, Puss in Boots is a feline outlaw wrongly accused of a crime he didn’t commit. In an effort to clear his name, this cute but fearsome cat teams up with Kitty Softpaws (Salma Hayek) and his old frenemy Humpty Dumpty (Zach Galifianakis) and sets out on a quest to find the goose that lays the golden eggs.

There are a few twists along the way, of course. Puss finds friendship and love, learns some important life lessons, and enjoys his fair share of swashbuckling adventures — even if cats don’t always land on their feet (after all, that’s just a rumor spread by dogs!).

It’s a fast, funny, family-friendly film, and a great way to kickstart your kitty movie night.

Yeah, baby! ‘60s super spy Austin Powers (Mike Myers) has been cryogenically frozen for the past 30 years, but now he’s back in an effort to thwart his old nemesis, the diabolical Dr Evil (also Mike Myers).

Dr Evil steals a nuclear weapon and (eventually) holds the entire world to ransom for $100 billion dollars. And in this parody of 1960s James Bond movies, Dr Evil, like all the best super-villains, has his own pampered pet: Mr Bigglesworth.

Originally a fluffy white Persian, Mr Bigglesworth loses all his hair in the unfreezing process, so from then on appears as a hairless Sphynx (played by a cat named SGC Belfry Ted Nude-Gent).

Mr. Bigglesworth features in all three Austin Powers films, but none more so than in this first installment. He also bonded closely with Mike Myers in real life, and could reportedly be regularly found sleeping on the actor’s laps between takes.

But Mr. Bigglesworth is far from the only memorable character in this 1997 spy comedy. Powers and Vanessa Kensington (Elizabeth Hurley) must also contend with fearsome fembots, ill-tempered mutated sea bass, a host of colorful villains you may recognize from old Bond films, and more double entendres than you can poke a stick at. Oh, behave!

Next on our list of the best comedies to watch with your cat is this blast from the past. In this 1951 screwball comedy, Rhubarb is a mangy stray tomcat with a penchant for stealing golf balls and chasing dogs. But when he’s adopted by eccentric millionaire T.J. Banner (Gene Lockhart), this kitty’s life takes an unexpected turn.

Banner is enamored with his new feline’s fighting spirit, and when he passes away, his last will and testament names Rhubarb as his sole heir. The cat inherits a fortune, including ownership of Banner’s baseball team the Brooklyn Loons.

And that’s where the fun really begins. The team’s PR manager, Eric Yeager (Ray Milland), is named as Rhubarb’s guardian — much to his bemusement, and to the exasperation of his allergic-to-cats fiancee. Yeager must also find a way around the fact that some Loons players are none too happy about playing for a feline team owner, while Rhubarb himself has to contend with devious catnappers and Banner’s inheritance-hunting daughter.

It’s wild, wacky, and just plain silly, but it’s also a whole lot of fun. And with the role of Rhubarb played by silver-screen legend Orangey, who also appeared in Breakfast at Tiffany’s, you and your kitty can enjoy watching Hollywood royalty in action.

If you and your fur-baby sit down to watch cult classic and Halloween favorite Hocus Pocus, you'll come face to face with immortal black cat Thackery Binx. This iconic kitty starts out life as a young boy in 17th-century Salem, where 3 witches — the Sanderson sisters Winifred (Bette Midler), Mary (Sarah Jessica Parker), and Sarah (Kathy Najimy) — kill his sister and cast a spell on Thackery to transform into a black cat and make him suffer for eternity.

The Sanderson sisters are executed for their crimes, but not before casting a spell that will eventually see them brought back to life some 300 years later. But when these wicked witches return are accidentally set loose upon the world by teenager Max (Omri Katz), the kids of Salem have a secret weapon to help them thwart the sisters' evil plans: Binx.

This immortal talking cat helps his young friends escape from all manner of scary situations, and leaves a lasting impression on audiences along the way. While Binx was reportedly played by as many as 9 black cats, animatronics were also used. In fact, the same animatronic cat from Hocus Pocus features in '90s TV series Sabrina the Teenage Witch.

This is one black cat you definitely do want to cross paths with, so be sure to add Hocus Pocus to your list of movie-night favorites.

Poor Greg Focker (Ben Stiller) has no idea what he’s in for. He’s found the woman of his dreams, but he’s about to find out that her family is a nightmare. The chief antagonist is his soon-to-be father-in-law Jack (Robert DeNiro), who takes an instant dislike to the man dating his daughter.

Ex-CIA agent Jack is as intimidating and hostile as they come, but saves his softer side for doting on his gorgeous pet cat, Mr Jinx. Jinx is the apple of his father’s eye and has even been trained to use the toilet, which, believe it or not, actually inspired the creation of a real-life cat toilet training system known as the Litter Kwitter.

Greg, meanwhile, is more of a dog person, but DeNiro’s character prefers cats because “cats make you work for their affection. They don't sell out the way dogs do.”

And while Jinx may not be a main character in the film, he steals the show in several scenes and causes all sorts of (often hilarious) problems for Greg. Just in case you haven’t seen the film before, we won’t reveal any of Jinx’s Focker-foiling antics — but suffice it to say he plays a key role in ruining any chance Greg has of impressing his prospective father-in-law.

Jinxie’s role in Meet the Parents was actually played by two Himalayans, Bailey and Misha. Robert DeNiro was apparently so besotted with his feline co-stars that he wanted Mr Jinx to appear in more scenes in the film. And once you’ve seen them in action, you’ll know exactly why the famous Oscar winner was so fond of these beautiful kitties.

Got a favorite cat movie, or just a side-splitting comedy you think other pet parents would love? Let us know in the comments below or on our social media channels @wag!