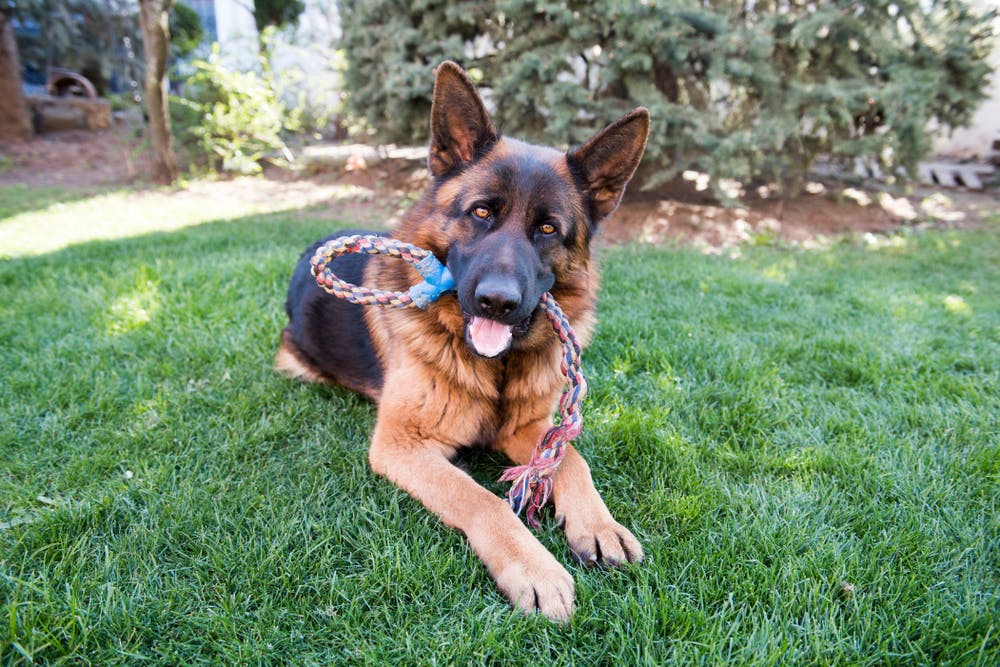 A beautiful dog with lots of great qualities, the German Shepherd Dog (GSD) has enjoyed immense popularity around the world since the breed’s creation at the turn of the 20th century. Originally bred as herding dogs, GSDs are also used as police dogs, military dogs, and service dogs, among other roles. Their loyalty and protectiveness make them excellent family pets as well; according to the American Kennel Club (AKC), German Shepherds were the third most popular breed in the US in 2020.

Unfortunately, the German Shepherd is afflicted with around 50 hereditary diseases, many of which are due to inbreeding during the breed’s early development. While not every dog will have health problems, it’s important to know which conditions the breed is predisposed to, especially if you’re a GSD parent or planning to become one. Understanding any potential issues your best friend might face will enable you to take better care of them. Here are five common hereditary issues found in German Shepherds.

A German Shepherd with a sloped back will have hips and knees that come closer to the ground, resulting in a shape that is more triangular than rectangular. This causes the hind legs to be more bent or angulated and the dog to shuffle when they walk. Unlike their straight-backed counterparts who are used as working dogs or companion animals, sloped-back German Shepherds are bred for show purposes.

As the German Shepherd’s role changed throughout history, so too did the breed’s appearance. The original GSD was a medium-sized dog used for herding purposes. As they became the preferred choice of many law enforcement and military agencies worldwide, the dogs were bred to be larger and more confident.

In recent decades, sloped backs have become more common in German Shepherds competing in the show ring due to a very small number of influential breeders who promoted this trait. A sloped back does not serve any practical purpose, but because it contributed to dog show wins, it became the norm among show GSDs.

Oddly, nowhere is a sloped back mentioned in the German Shepherd breed standard. According to the AKC, a German Shepherd back should be “straight, very strongly developed without sag or roach, and relatively short.”

There is no treatment for a sloped back, and while it is considered a desirable feature in the show ring, it may be linked to the GSD’s predisposition to certain health problems. It also has a significant impact on the way the dogs move and stand, as revealed in a 2020 study from the School of Veterinary Medicine at the University of Surrey. Therefore, it is recommended to choose a German Shepherd with a straight back when acquiring one.

Hip dysplasia is one of the major hereditary diseases afflicting the German Shepherd. Most commonly seen in large breed dogs, hip dysplasia occurs when the ball and socket of the hip joint do not grow at equal rates during puppyhood. This results in looseness of the joint, causing the head of the femur to grind in the joint socket instead of gliding smoothly. Hip dysplasia can lead to degenerative joint disease or osteoarthritis later on.

While hip dysplasia is a genetic condition, other factors such as diet, exercise, environment, growth rate, muscle mass, and hormones also contribute to its development. A study of German Shepherds found that overweight puppies were more likely to develop the disease, thus it is important to not overfeed puppies during growth.

To diagnose hip dysplasia, your vet will conduct a physical exam. They may manipulate your dog’s hind legs to test the looseness of the joint and to check for any pain or reduced range of motion. A complete blood count may be performed as well, as it can indicate inflammation due to joint disease. In addition, your vet will need a history of your dog’s health, symptoms, and any past injuries. Any information you have about your dog’s parentage can also be helpful.

Radiographs provide the definitive diagnosis for hip dysplasia, as these allow the vet to determine the degree and severity of the disease. Dogs who are to be used for breeding purposes must undergo a series of radiographs to rule out hip dysplasia before they can obtain a breeding certificate.

Treatment options for hip dysplasia range from lifestyle modifications to surgery. If your dog’s hip dysplasia is not severe or if they’re not a candidate for surgery, your vet may recommend the following:

For cases requiring surgery, the most common strategies used are:

Gastric dilatation and volvulus (GDV), also known as bloat, is a life-threatening disorder that usually occurs in dogs with deep, narrow chests, including the German Shepherd. When a dog bloats, the stomach fills with gas. When a bloat progresses into a volvulus, the stomach twists on itself, blocking both the entrance and exit, dragging the spleen and pancreas along with it, and cutting off blood flow.

The exact cause of GDV is unknown, but it is more commonly seen in large, deep-chested male dogs. Other factors that increase the risk of bloat include:

Gastric dilatation and volvulus is a medical emergency that requires immediate surgery. It is fatal without treatment, sometimes in as little as 30 minutes. Most dogs go into shock within an hour or two.

Veterinarians begin by treating the shock with intravenous fluids and emergency medications. Once the dog is stable, they’re taken into surgery to deflate the stomach and return it to its correct position. Any dead or dying stomach tissues are also removed. If the spleen has been significantly damaged by the stomach, it will be removed as well. To prevent the stomach from twisting again, vets may perform the following procedures:

Bloat can also be prevented by:

Degenerative myelopathy (DM) is a neurological condition affecting the spinal cord, causing progressive weakness and paralysis in the hind limbs. DM is similar to some of the forms of amyotrophic lateral sclerosis (ALS) in humans and frequently affects middle-aged and older German Shepherds and German Shepherd crosses.

DM can be challenging to diagnose due to its early-stage symptoms resembling those of osteoarthritis (OA). Early signs include:

Wobbling, stumbling, and eventual paralysis of the hind legs are seen in the later stages of the disease, distinguishing it from OA.

The exact cause of degenerative myelopathy is unknown, although a genetic mutation known as SOD-1 is highly suspected. Age and predisposition of certain breeds are also possible causes.

Diagnosis
Diagnosing DM is often a difficult and time-consuming undertaking, requiring several tests and other diseases to be ruled out first before a definitive diagnosis can be made. Tests that your vet may perform are:

Your vet will also check your dog for any herniated discs, disc disorders, tumors, cysts, and infections.

There is no cure for degenerative myelopathy, but exercise such as walking and swimming and supplements such as N-acetylcysteine and vitamin B can slow the progression of the disease. It is important to avoid obesity and keep your dog active for as long as possible; physical therapy has been shown to preserve muscle mass and extend quality of life.

Von Willebrand's disease (vWD) is an inherited bleeding disorder caused by a deficiency in a specific protein that aids in clot formation when a blood vessel is injured. At least 30 breeds are affected by this disease, including the German Shepherd.

Many dogs with vWD never show signs of having the disease, while others may spontaneously bleed from the nose, mouth, and urinary, intestinal, or reproductive tracts. Prolonged bleeding after surgery such as spaying or neutering is common, and female dogs may bleed excessively after giving birth.

Von Willebrand's disease is genetic in nature; it is caused by lack of the von Willebrand factor (vWF) protein. In healthy dogs, this protein circulates in the bloodstream and is present at the site of a blood vessel injury, helping platelets to stick together and form a clot to control the bleeding. With vWD, clot formation does not occur.

Diagnosis of von Willebrand's disease may begin with a complete blood count evaluation to rule out other possible causes of excessive bleeding such as a low platelet count. Your vet will then perform a buccal mucosal screening time, where a small cut is made in the upper lip and the length of time it takes for the bleeding to stop is evaluated. To confirm the diagnosis, your vet will order a laboratory blood test that will determine the exact amount of von Willebrand factor present in your dog’s blood.

Unfortunately, there is no cure for vWD. Since emotional stress appears to trigger bleeding episodes in some humans with the disease, you should try to maintain a stress-free lifestyle for your dog as well. In addition, dogs with vWD should not be given drugs that interfere with platelet function, including aspirin, heparin, and sulfa-based antibiotics. In case of an emergency, transfusion of blood or fresh frozen plasma may be required.

Hereditary issues in German Shepherds can be expensive to treat. If you suspect your dog is at risk of any of the above conditions, start searching for pet insurance today. Wag!’s pet insurance comparison tool lets you compare plans from leading companies like PetPlan and Embrace.