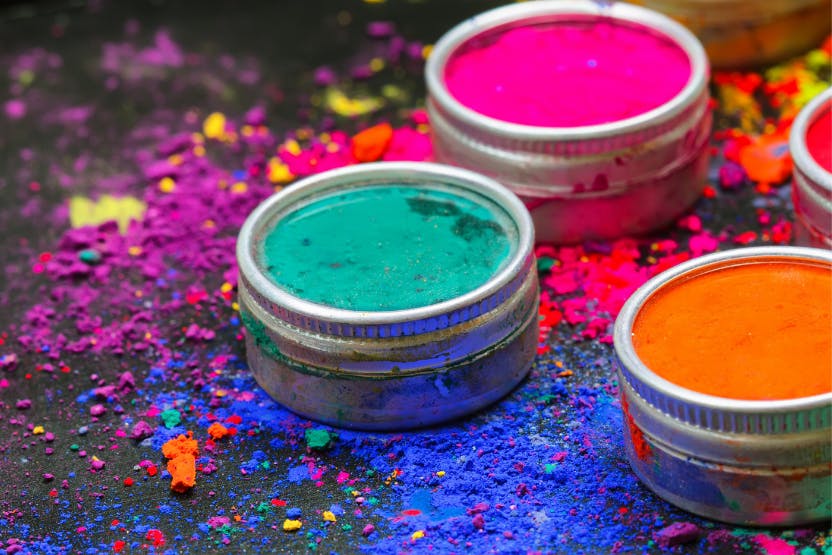 Whether your fur-baby's kibble is colorful or solid brown, chances are it contains some sort of food coloring agent. But what is food coloring anyway? And can it be harmful to our pets? Unfortunately, the answer isn't black and white.

In this article, we'll take a deep dive into the research on food dye in pet food, FDA regulations on food coloring agents, and the potential dangers of artificial coloring so you can make the most educated decision possible for your pet.

Food dye is nutritionally void, adding no additional calories, vitamins, or minerals. Its sole purpose is to make products more colorful for the pet parent.

What is food coloring?

There are 2 types of food dyes: natural and synthetic.

As the name suggests, natural food coloring is made from natural sources like fruits and veggies (including beet juice, turmeric, blueberries, and wheatgrass) and sometimes bugs (like beetles). Since these coloring agents come from organic matter, there's little to worry about unless your pet has food allergies.

The safety of synthetic food dyes, on the other hand, is a hotly debated topic. Synthetic food dyes are petroleum-derived additives used in both human and pet products. Besides food, these dyes are common ingredients in medications, mouthwash, shampoo, and cosmetics.

Food dye is nutritionally void, adding no additional calories, vitamins, or minerals, and its sole purpose is to make products more colorful.

Food manufacturers add artificial dyes to their recipes for a few different reasons. For one, most commercial pet food is rendered at extremely hot temperatures, which often causes ingredients to discolor. Similarly, exposure to oxygen, UV rays, and humidity can darken or mute the color of certain ingredients.

Secondly, some foods just look bland to begin with, and food companies add dye to give the food some visual appeal. Finally, the appearance of processed pet food can vary from batch to batch, but adding dye (either artificial or natural) can ensure every batch is uniform in color.

Simply put, artificial dyes make pet food more attractive — at least for the humans that serve it. You see, pets don't see the same range of colors humans do. Dogs have dichromatic vision, meaning their eyes possess only 2 types of color-discerning cones, unlike humans, who possess 3 types. But even this one extra cone type allows us to see a much larger range of colors than dogs, whose vision is limited to shades of blue, yellow, and black. Like dogs, cats also have fewer cones than humans and view the world with a limited color spectrum.

The truth is pet food manufacturers add dye to their recipes solely for pet parents. Food dyes have no nutritional value and are essentially a marketing tactic to make the food look more appealing to shoppers.

A brief history of food additives (and their regulations)

For thousands of years, humans have been experimenting with additives to preserve food and improve its flavor and appearance. According to historians, the practice of using spices to prevent food spoilage dates back to at least 3000 BC.

In the 1800s, people started becoming more creative with their additives, turning to chemicals and heavy metals like arsenic and mercury to make foods more vibrant. Sadly, many people died from the unregulated use of these toxic substances.

In the early 1900s, food manufacturers began experimenting with byproducts from the petroleum and coal industries to create synthetic food additives for preservation and cosmetic purposes. Unfortunately, many of these additives were just as dangerous as the chemical additives before them.

In 1906, soon after petroleum-based additives were introduced into the supply chain, the US government passed the Pure Food and Drugs Act. The bill aimed to protect consumers from dangerous products, including some of the artificial food dyes already on the market. This bill outlined acceptable manufacturing practices and sanitation measures and made harmful ingredients unlawful. This progressive bill made waves in the food industry and is still in place today.

Since the 1960s, the Food and Drug Administration has banned more than 25 food color additives, and there are less than a dozen FDA-approved artificial food coloring agents left on the market. The artificial dyes that remain are held to strict regulations regarding their usage, including how much dye manufacturers can use and which products they can be used in.

Most true food allergies in pets are due to food proteins, which food dye doesn't contain.

A closer look at the research on food dye

Several independent studies have investigated food dye safety — and the results are a mixed bag. Studies link 4 of the most common artificial dyes (Blue #2, Red #40, and Yellow #5 and #6) to hyperactivity, allergic reactions, and even cancer in humans.

But does the same hold true for dogs and cats? Ultimately, we're still not sure — more research is needed to confirm the effects of food dye on dogs and cats.

Most of the research on how food dye affects animals involves lab rats. There is little data regarding dye-related allergic reactions in pets specifically. But we do know that most true food allergies in pets are due to food proteins (which food dye doesn't contain).

However, studies show that Red #40 and Yellow #5 and #6 can cause hypersensitivity and cell damage in small mammals (namely rodents). Hypersensitivity occurs when the immune system "overreacts" to a potential allergen. As a result, food-induced hypersensitivity has similarities to food allergies.

Red #40 (also called Allura Red) is FDA-approved for use in food and cosmetics. Studies indicate that this dye, along with Yellow #5 and #6, can cause hyperactivity in children and adolescents. Animal studies found that exposure to high doses of Red #40 resulted in changes in brain chemistry, as well as learning and memory.

Red #3 is another concerning food additive since studies have found a link between it and thyroid cancer. Even the FDA recognizes it as a carcinogen. Despite this — and former FDA commissioner Mark Novitch calling it a significant "public health concern" — the FDA still allows Red #3 in food and oral medications.

Several independent studies found trace amounts of known carcinogens in dyes Red #40 and Yellow #5 and #6. (The FDA allows trace amounts of these contaminants as long as they're within a certain percentage of the total volume.)

FDA officials meet regularly to review studies and re-evaluate the approval status of food additives. However, they claim there isn't sufficient data to justify outlawing synthetic dyes or adding a warning label to products that contain them.

Is food coloring safe for pets?

So, knowing all that, how safe is food coloring in pet food? It's a tricky question to answer. Despite the startling findings described above, the FDA classifies artificial food dyes as "generally safe to use".

Experts say that food dye does not influence the body's ability to metabolize food. What's more, major pet food manufacturer Purina states very little artificial dye is needed to achieve the desired color of food. Additionally, the company only uses FDA-approved additives. In a pamphlet on food coloring in pet food, Purina urges parents never to buy pet food made with unapproved dyes (although this shouldn't be an issue in the US market).

Remember, it's up to you to advocate for your pet and make educated decisions for their health. If you don't feel comfortable buying pet products containing artificial food dye, opt for a pet food that uses natural dye instead, like Taste of the Wild dog food or Blue Wilderness cat food. However, you should always consult with your vet before switching Fido's food since abrupt changes in diet can cause stomach upset.

Artificial food coloring has been under fire since the 1970s, with watchdog groups rallying to ban it entirely. But despite the ongoing controversy, the FDA maintains that food dye is generally safe and has no plans to ban its use in human or pet foods. More research is necessary to determine the long-term effects of food dye in humans and animals, but we'll keep you updated as new information arises!

Got more questions about your pet food ingredients? Chat with a veterinary professional today to get the lowdown on artificial food additives, gluten, and more.