How to Protect Your Dog from Scorpions 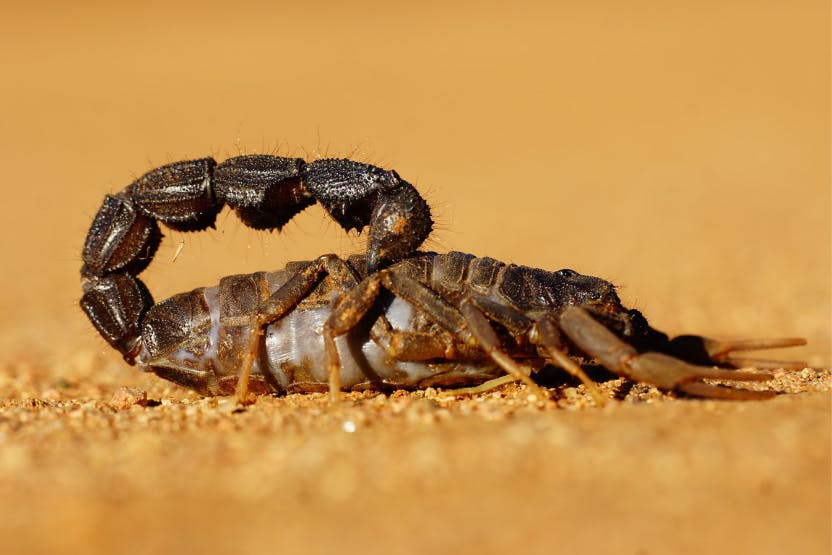 Our canine compadres are an inquisitive bunch, always looking to stick their snouts into something new. While a bit of natural curiosity is a good thing, there's a chance your doggo could take an interest in something that stings, like a scorpion.

Seventy species of scorpion live in the United States. Luckily for people and pups, only one of these species poses a serious threat: the Arizona bark scorpion. So, unless you're near the Sonoran Desert, you won't need to worry as much about keeping your canine safe from scorpions.

That said, it's still important to keep Fido away from these arachnids. Scorpions are widespread across the country, living in at least 29 states. Common species, like the striped bark scorpion, can still pack a nasty punch and will often mean a trip to the vet. Plus, there's a chance your pup could be allergic. Here's how to protect your dog from scorpions and what to do if Scruffy gets stung.

How to protect your dog from scorpions

No need to fear scorpions when you're out and about with your pup! Here are a few tips to help keep scorpions away from your doggo.

Keep your pup on a leash

If you like to walk your dog in the country, especially if you live in the Southwest, keep your doggo on a short leash.

Keeping your pup on a leash while hiking is a good idea, as there are a number of potentially dangerous critters that could feel threatened by your pooch. It also reduces the chances of your dog stumbling upon a scorpion.

Brush up on training techniques

If you plan on letting your dog loose on your hikes, brush up on their training. This way, you can get your dog to obey your commands, potentially stopping them from sniffing at a scorpion. Commands like "leave it" and "come" are handy for general obedience as well as outdoor adventures.

Keep your dog inside at night

Scorpions are nocturnal critters, so you're far more likely to see one after the sun goes down. If you have an outdoor dog, bring them in at night. By doing so, you'll drastically reduce the chances of Lassie encountering a scorpion.

Scorpions love nooks and crannies, so removing these hiding spots reduces the chances of scorpions living in and around your house. If you have any cracks under windows or in walls, get them sealed. You should also check your yard and remove any large stones or debris, as these are perfect scorpion hiding spots.

Stop your dog from digging

As well as living under rocks and in crevices, many species of scorpion also live in burrows underground. If your dog loves to dig, there's a chance they could dig up a scorpion burrow and accidentally get stung. Consider giving Princess some extra training to stop them digging holes in your yard. If they love to dig in one specific spot, consider covering it.

The bigger the scorpion, the better

While you might think the larger the scorpion is, the more venom it carries, this isn't the case. Strangely, the bigger these arachnids are, the less venom they carry. Therefore, you'll want to be especially wary of small scorpions, like the Arizona bark scorpion. If you spot any small scorpions in your yard, get rid of them immediately.

If you live in an area with lots of scorpions, it's vital to know what to do if your dog gets stung. While most scorpion venom isn't enough to kill a person or pupper, it'll still cause serious pain and tissue damage. All dogs are different and will react differently to scorpion stings.

How to identify a scorpion

Scorpions are easy to identify. They're arachnids with 8 legs, 2 grasping pincers, and a forward-curled, segmented tail with a stinger on the end. It's difficult to mistake scorpions for a different arachnid or insect.

If your dog has been stung by a scorpion, it's worth trying to identify the species, as it may be helpful in treating the sting. Remember to keep your distance, and don't attempt to pick up a live scorpion. Here are a few identifying marks of common and dangerous scorpion species in the US.

Striped bark scorpions grow up to 2.75 inches in size. They're found in Arkansas, Colorado, Georgia, Florida, Illinois, Kansas, Louisiana, Missouri, Nebraska, New Mexico, Oklahoma, and Texas. There have been additional sightings across the US, including in Arizona, North Carolina, and California. Their sting is rarely deadly but causes severe pain and swelling.

The southern unstriped scorpion is one of the most common scorpions in the Southeast. It's fairly unremarkable in appearance, with no distinct markings and a dark coloration with a long slender tail. They usually grow to around 2 inches in length.

As mentioned, southern unstriped scorpions are common in the Southeast, including Kentucky, South Carolina, Louisiana, Virginia, Georgia, Tennessee, and Alabama. Their sting is mild and is comparable to a wasp or bee sting.

The range of the Arizona bark scorpion is primarily the Sonoran desert, as well as southern Arizona, southern California, and western New Mexico. Bites are most common around Phoenix. Stings can be fatal, but this is rare with prompt and proper treatment.

The stripe-tailed scorpion is also known as the devil scorpion. It's similar in appearance to the Arizona bark scorpion but can be differentiated by the brownish stripes on its tail and ridges. They grow to a maximum of 2.75 inches.

The giant hairy scorpion is native to the Sonoran and Mojave deserts. They can be found in western Arizona, southern California, southern Nevada, and southwestern Utah. Their venom lacks potency, and the pain of a sting is comparable to a bee sting.

Signs of a scorpion sting

Common symptoms of a scorpion sting in dogs include:

Scorpion stings in dogs can be expensive to treat.

The severity of a scorpion bite depends on the size of your dog, the type of scorpion, the amount of venom released, and your dog's health.

A smaller breed, like a Chihuahua or Bichon Frise, is more likely to have a severe or life-threatening reaction to a scorpion sting than a German Shepherd or Great Dane.

Older dogs and puppies are also more likely to have severe reactions to scorpion venom. There's no easy way to tell how much venom is released by a scorpion.

Of course, your dog is more likely to have a severe reaction to the sting of an Arizona bark scorpion than a giant hairy scorpion. Any severe reactions (as listed above) will require immediate medical attention.

If you suspect your dog has been stung by a scorpion, take them to the vet to be safe. Your vet will diagnose a scorpion sting based on your location, your dog's recent activity, and the site of the sting.

Unfortunately, scorpion venom doesn't show up in blood tests. The only surefire way of telling if a dog has been stung by a scorpion is if the stinger is still present.

Unfortunately, there's no simple way to remove or extract scorpion venom from a dog. When you arrive at the vet, they'll check the site of the sting and remove the stinger if it's still attached.  They will then clean the wound.

Your vet may prescribe some pain medication to relieve any discomfort. They may also give your dog fluids to ensure they're staying hydrated. If the sting is serious, they may want to monitor your dog's condition for several hours.

The average cost of treating a scorpion sting: $5,500

If you're traveling to the Southwest with your dog and you're worried about scorpion stings, get pet insurance. Scorpion stings are expensive to treat out of pocket. Secure pet health insurance today to protect your dog (and your wallet) from unexpected vet costs.