Think your barking buddy could be Best in Show? International dog shows have been deciding who's the top dog in town since the founding of Westminster Dog Show in 1877. In honor of this year's upcoming show, we've dug up a list of the most famous show dogs throughout history so you can size up the competition.

Winner of Best in Show at the 2008 Westminster Dog Show, Uno (aka K-Run's Park Me In First) is one of the all-time greatest show dogs. After becoming the first Beagle ever to win the top prize, Uno's popularity led him to celebrate victory at the White House with President George Bush.

Uno's fame didn't stop there. He also "threw" the first pitches at 2 baseball games and even has a day in March named after him in his home state of Illinois. After his win, TV host David Frei stated, "Uno is easily the most popular Westminster winner in my 25 years."

Kirby, or Loteki Supernatural Being, was a true champion, winning 31 Best in Show awards throughout his lifetime, including taking the crown at the Westminster Dog Show and the World Dog Show. This plucky Papillon won the Westminster Dog Show in 1999 at the age of 9, making him the oldest winner at the time, a record that would stand for 10 years.

Albert, or Canigou Cambrai, is arguably the king of the English Cocker Spaniels. He won Best in Show at Crufts in 1996, making him the first Spaniel to win the prize in 46 years.

He is one of the most successful Cocker Spaniels in UK history, winning 28 challenge certificates over his career. Albert also sired multiple award-winning show dogs that went on to take Best in Show at several international events.

Choo-tai of Egham was Crufts Best Champion in 1913 and won over 200 prizes, but is perhaps more famous for what happened after the championships. While attending a dog show in Southampton, England, Choo-tai was poisoned by a piece of liver and subsequently passed away.

Afterward, Choo-tai's handler received a note saying that the suffragette movement had poisoned the dog and would poison every future winner until women were able to vote. Thankfully, there were no more poisonings, although women didn't get equal voting rights in England until 1928.

Charmin, also known by their official name Efbe's Hidalgo At Goodspice, is another woofer who won a heap of prizes. From 2007 to 2009, Charmin won everything under the sun, including the American Kennel Club National Championship, the World Dog Show, and Crufts. He also won the Terrier class at the Westminster Dog Show.

His victories are all the more impressive due to his breed's rarity, with only 43 Sealyham Terriers born in the UK during 2008 when he won the World Dog Show.

Hickory, aka Foxcliffe Hickory Wind, won the Westminster Dog Show in 2011. She was the first Scottish Deerhound to win the competition in its history. Hickory is a true "underdog", surprising many with her victory, edging out some of the top breeds in the US to take the title. She had odds of 60 to 1 to win. Her popularity led her to appear on several talk shows, including The Martha Stewart Show and The Today Show.

#7. My Own Brucie the American Cocker Spaniel

My Own Brucie was a hugely "pawpular" pup, winning Best in Show at the Westminster Dog Show in 1940 and 1941. His father, Red Brucie, was a very famous sire, having fathered 36 champions throughout his life.

My Own Brucie's fame led him and his handler to enjoy a testimonial dinner in their hometown of Poughkeepsie, New York. His obituary said that My Own Brucie was "probably the most photographed dog in the world...subject of motion picture shorts and numerous magazine articles."

Winner of Best in Show at Crufts in 2010, Yogi is one of the all-time greats. Also known by his official name Hungargunn Bear It'n Mind, Yogi broke the record for most Best in Show wins at all breed championship competitions in the UK. The record had stood for 80 years but was again broken in 2014.

Yogi was also a prolific sire. He fathered 525 puppies over 5 years in the UK, which accounted for around 10% of all Hungarian Vizslas born during this time.

Another dog who was just as famous for their show dog skills as their personal story was Tickle Em Jock. The 1911 Best in Show winner at the Westminster Dog Show was bought by his pet parent at a London meat market for only £2, equivalent to $15.

Following his success, his handler was offered as much as $5,000 for Tickle Em Jock. He also drew lots of media attention for biting a judge's hand immediately after winning his Westminster Kennel Club title. 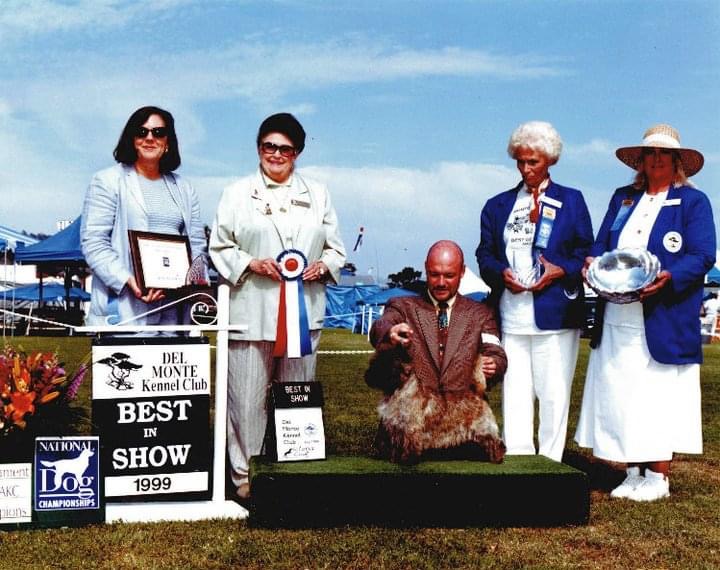