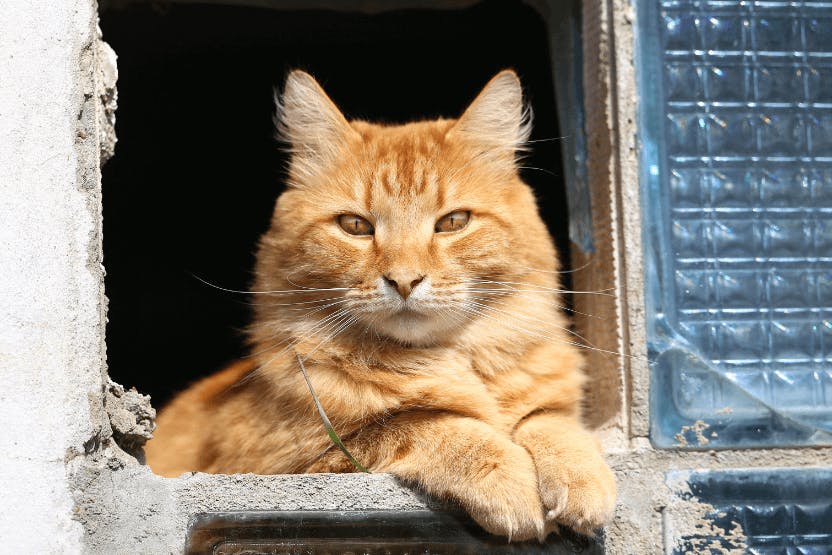 What is a ginger cat? A cat who's fur lands anywhere along the color spectrum from pale yellow to orange to deep red. While gingers don’t carry the questionably sinister reputation of black cats, or the haughty, aloof personality of Persians, their orange purr-sonas can be a complicated mix of several feline traits. It’s in their genes.

Whether you call your ginger purrball a cinnamon, red, marmalade or tiger cat, or if you are looking at adopting an orange cat, check out some interesting facts about these colorful furballs for Ginger Appreciation Day this September 1st.

Ginger is not a breed

A common misunderstanding is that there’s a breed of cat called a ginger or orange tabby, but many domestic breeds, including the Maine Coon, Persian, American Shorthair, Abyssinian, Bengal, Egyptian Mau and many others can have orange, red or yellow coloration. Since genetically, the gene for red hair is dominant, it has appeared across the board in purebred and mixed breed cats alike. Ginger cats can be all orange, partly orange or have orange flame point markings.

All ginger cats are tabbies

Being a tabby cat means that they have markings on their bodies that can appear as swirls, spots or stripes, but whether or not you can see those markings depends on if they also inherited the dominant agouti gene. If the cat inherited the non-agouti recessive gene, they are generally solid colored, but may show those markings as a kitten, such as like lion cubs who grow out of their spots. However, due to the genetics that makes ginger cats ginger, they can only inherit the dominant agouti gene, which means all ginger cats will show their tabbiness.

Where did the tabby name come from? Wild tigers, the largest member of the cat family to have tabby stripes, are said to have developed them genetically to camouflage them, and since those markings resembled the striped, silk fabric found in Iraq, they were named after it.

All ginger cats have stripes

There are actually five different versions of tabby cat markings that can appear in orange cats. These include the classic or blotched, featuring swirly markings that resemble a bull’s eye on both sides; the mackerel with its familiar tiger stripes; spotted that features various sizes and shapes of spots or dots; ticked, in which markings may only appear on the face, legs, tail and neck; and patched where orange is just one color in a coat that features white chests, paws, and tail tips, such as with Tortoiseshell cats.

In addition to these markings, tabbies of any color, including ginger, also display a forehead marking that looks like a large “M.”

Got an orange cat without any markings? Look again! Tabbies grow hairs that are banded with color along the length of the hair called “agouti hairs,” and they appear on animals with a specific gene for the trait, such as cats, rabbits, and squirrels. They form colors with depth that can make them appear fuzzy or shimmer, as in the Abyssinian. Your ticked or seemingly solid colored cat is actually covered in these hairs, so take a closer look to see the pattern hiding underneath.

Most ginger cats are male

Being the dominant gene in the feline world for fur color means there's a lot more ginger cats running around than redhaired humans. But also due to genetics, there are a lot more male orange cats than female. That's because a male cat only needs to inherit one dominant gene for red hair carried on the X chromosome from their mother to be ginger, while a female cat needs to inherit that same gene from both their parents to be orange. Since females inherit two X chromosomes, it is possible for them to inherit more than one dominant color genes which forms the fur patterns known as calico and tortoiseshell, which are almost always females.

As a result of all this genetic mixing, male cats make up 80% in the ginger color spectrum to the 20% of females, including bi- and tri-colored coats.

Many ginger cats have freckles

Cats can get freckles, much like people. But in cats, its usually caused by lentigo, a genetic condition that leads certain cells to produce more melanin, hence creating lentigines, or freckles. And since lentigo is associated with the gene that makes hair red, freckles are most commonly seen in ginger cats, as well as calicos, tortoiseshell and flame point cats with orange colorations. These pawdorable spots are often seen on their upper lips, gums and pink, smoochable noses.

A 2016 study set out to determine if certain physical characteristics of purebred cats were associated with particular behaviors, and came up with some interesting finds. Though they discovered that most behaviors seemed to follow breed standards rather than coat types, they did see associations separate from breed that suggested that agouti cats show an increased aggression and ginger cats have an increased interest in prey. This means your tiny orange tiger may actually feel the need to stalk and hunt more than your solid white Persian.

As anyone with a red cat in their lives knows, they love to be in the spotlight. Chattering, talking, playing and snuggling, they'll hold your attention for hours. So, it shouldn't be any surprise that several gingers have made it to Hollywood and beyond!

The 2017 film, A Street Cat Named Bob, was based on the book and true story of ginger cat Bob who helped heroin addict James Bowen survive on the streets of London and reach for a better life. Breakfast at Tiffany's fans all know and admonish Holly Golightly for not giving her ginger cat a proper name, but Orangey Minerva was a star who won two PATSY awards. Bi-colored ginger Orion helped the Men in Black stop an alien invasion, while Jones was the only survivor with Ripley in the original Alien movie. Milo traveled across the country with his Pug pal in Milo and Otis, and anyone with kids knows Puss in Boot's swashbuckling lines well from the Shrek movies. Harry Potter’s bestie Hermione even has an orange Persian named Crookshanks.

And who hasn't seen Garfield, the cynical, lazy, gluttonous ginger tabby in the comic that features him and is the most widely syndicated strip worldwide? Ginger cats are everywhere, even selling pet food, such as Morris, the spokesfeline for 9Lives who also was a shelter cat that turned into a superstar!

Anyone who has lived with one of these orange felines can report that they’re very talkative. Their gregarious voices emit a variety of sounds like chirping and trilling, and while other cat types may typically vocalize only when they’re hungry or want to go outside, gingers seem to use their voices for their own pleasure, and their pet parent’s. From self-reported surveys to vets and zookeepers, the numbers are in: ginger cats, by far, vocalize the most!

So, it should be no surprise that orange cats make great advisors. President Abraham Lincoln once commented that his feline furiend, "Dixie is smarter than my whole cabinet!" Later US President Bill Clinton often had his cat Socks on his shoulder in the Oval Office. And for Prime Minister Winston Churchill during World War II, his favorite orange tabby named Tango sat by his side for strategy discussions, no doubt offering his uniquely feline advice.

A ginger cat was once a mayor!

In 1998, an orange tabby named Stubbs was elected Mayor of the town of Talkeetna in Alaska. Mayor Stubbs kept office hours for 19 years at Nagley’s General Store, greeting visitors and listening to the news the customers brought in with them. He supervised the young ones at the candy counter, and at the end of every day he was treated with water laced with catnip, served to him in a wine glass.

The Honorable Mayor Stubbs held office until he died in 2017 at the ripe old age of 20.

Ginger cats are the friendliest

Gingers are known mostly for their calm, mellow, and very affectionate purrsonalitities, and some may even describe them as "Velcro cats." When their people are at home, they’re usually not far away, hoping for a snuggle session. They’re quite demonstrative, rubbing their faces and bodies against their human and lying on their backs so their tummies are available for petting or scratching.

A 2012 study supposedly found a link between friendliness and ginger cats, but was later debunked when, in 2016, another study published in the Journal of Applied Animal Welfare Science determined that color has no impact on personality and behavior.

However, it’s widely believed in the feline scientific community that male cats are typically more pleasant and friendlier than female cats. And since 80% of ginger cats are male, this may be why more ginger cat parents experience the friendlier sex's lively relaxed and attentive demeanor.

Got a furbulous ginger cat story to share? Let us know in our comments section below, and tag #wagwalking or @wag on Instagram for a chance to be featured on our feed!

How to Get More Cat Sitting Clients on Wag!