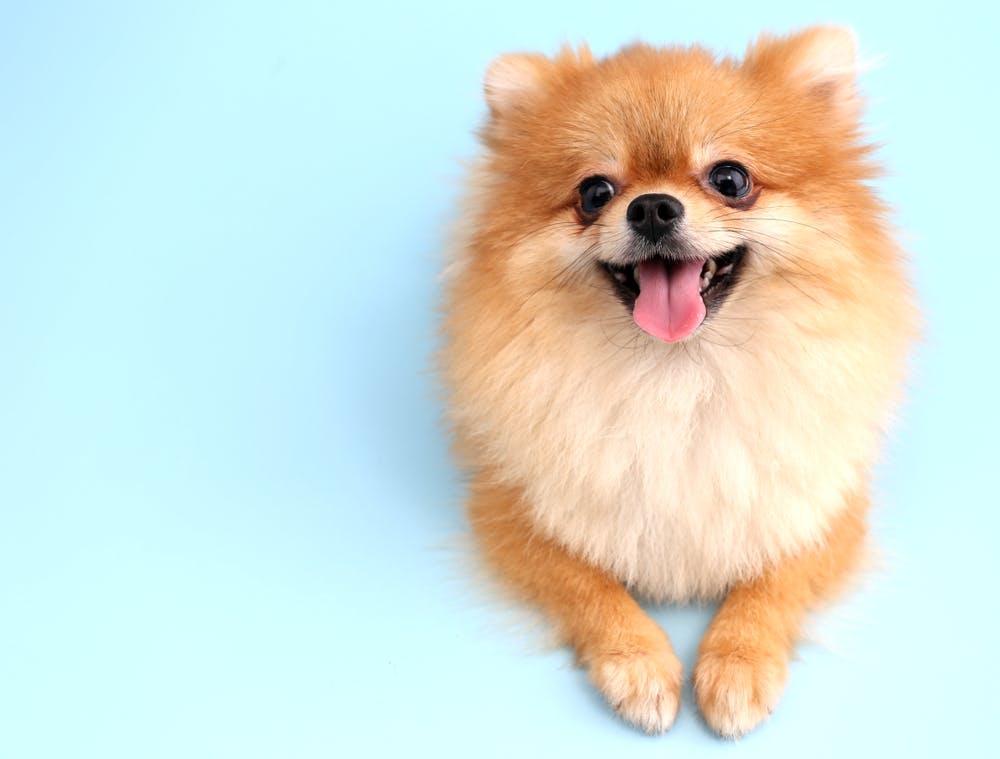 Despite originally being from Iceland, Pomeranians were largely developed in Pomerania, an area along the south shore of the Baltic Sea that encompasses parts of Germany and Poland. Pomeranians are among the fluffiest and cutest dog breeds, which is why they continue to be one of the American Kennel Club’s most popular. There are also some pretty amazing facts behind this breed as well, and here are 13 facts about Pomeranians that will fascinate you!

Many dog breeds come in only one or two colors, while others are available in four or five. Pomeranians on the other hand have 23 color combinations that are accepted by the American Kennel Club. These colors include beaver, sable, chocolate, black, orange, and white in addition to a number of combinations of those colors.

Blue Pomeranians are not blue

Blue Pomeranians are not classified as such because of the color of their fur. Instead, a blue Pomeranian is distinguished by the color of his nose. Blue Poms have dull black fur and noses with a bit of blue coloring on them; they may sometimes have blue eyes as well.

Many Pomeranians change color as they age

Many Pomeranian puppies will eventually change color as they mature. For example, a cream-colored dog might end up as a brown and white Pomeranian, while a brown one could eventually turn bright orange. It is not possible to know which puppies will change colors as they grow older and which ones will not.

Mozart is said to have dedicated one of his finished arias or expressive melodies to his beloved Pomeranian, Pimperl. Chopin’s “Waltz of the Little Dogs” was reportedly written after the composer watched his friend’s Pomeranian gleefully chasing its tail.

The great Italian painter Michelangelo was one of the earliest known Pomeranian lovers. Legend has it that when the artist painted the ceiling of the Sistine Chapel, his beloved pet sat nearby, relaxing on a silk pillow while watching his master work.

Even though Michelangelo owned a Pomeranian, they were largely an obscure breed until 1888. That was the year Queen Victoria traveled to Italy, where she met a beloved Pomeranian named Marco. She became a staunch advocate for Pomeranians, and is even credited for breeding them from the larger 20-pound dogs they were then to the smaller six-pound canines they are today.

The 26th President of the United States also owned a Pomeranian that he affectionately referred to as Gem. He talked extensively about his mother’s relationship with Gem in a letter to his son Kermit, describing how Gem sometimes “carries her along as if she was a Roman chariot.” Apparently, Roosevelt passed his dog on to his uncle Will because his mother was unable to control him.

Before being bred into the smaller animals they are today, Pomeranians were actually used to pull sleds and herd reindeer. This may seem unfathomable unless you know that Pomeranians are actually Spitz dogs that are closely related to breeds such as Huskies, Malamutes, Samoyeds, and Akitas, all of which originate from Arctic regions.

Occasionally, a pom that very closely resembles its ancestors is born. Known as a “throwback” Pomeranian, this dog is pure white in color, and that does not change as the pup grows older. This Pomeranian can eventually weigh more than 20 pounds, and will more closely resemble another Spitz breed. Throwback poms are always a surprise, as they are completely unpredictable.

One Pomeranian is a social media sensation

A Pomeranian named Boo has received more than 17 million likes on Facebook and more than 618,000 followers on Instagram, where he goes by the handle @buddyboowaggytails.

Jiff the Pomeranian can be seen in Katy Perry’s music video for Dark Horse, and has also held two Guinness World Records. One was for the fastest 10-meter run on hind legs at 6.56 seconds, and the other for the fastest five-meter run on front legs at 7.76 seconds. Both of Jiff’s records were set in 2014, but his record for fastest front paw run has since been broken by a mixed breed.

Two Pomeranians survived the sinking of the Titanic

In all, there were 12 dogs aboard the Titanic when it sank. Only three of those dogs survived, two of which were Pomeranians. One belonged to Elizabeth Rothschild, who refused to board her lifeboat without her canine companion. The other named Lady belonged to Margaret Bechstein Hays, who wrapped her dog in blankets before carrying her aboard lifeboat number seven.

Pom dams may give birth to twins

Pom dams, or mothers, are capable of giving birth to twins, a rare phenomenon among dogs. Pomeranian twins are enclosed in their own individual embryonic sacs, yet share a single umbilical cord. It is not unusual for each Pomeranian twin to be a different color. As such, it is not likely that the pups would be recognized as twins unless someone is physically present to witness the birth.

Pomeranians are fiercely loyal companions who are highly protective of their owners. They make the perfect choice for anyone who is looking for a small dog breed to serve as a watchdog and faithful friend.

MY POMERANIAN IS CHOKING ME

thank you so much this is so much help