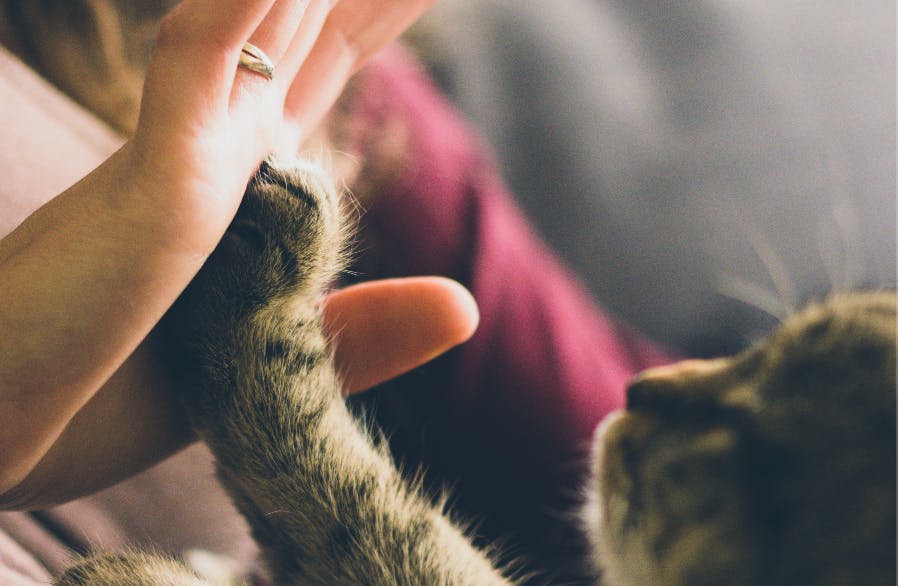 Cats are certainly fascinating and mysterious creatures. Humans have been trying to decipher their behaviors and thoughts for thousands of years, which has spurred many myths and legends about our feline furiends. If you’ve been enjoying the benefits of life with a cat, you’ve likely mulled some of these over yourself. Here are the TOP 13 myths about cats we’ve debunked to give you some answers at last!

This common myth comes from Celtic mythology’s Cat Sidhe, a magical Fairy Cat that could take the form of a human, then change back into its cat body. Since it could only transform from a human to a cat eight times, and after the ninth time it changed back into a cat—it lost its shapeshifting ability, which spurred the idea that a cat has nine lives as a cat.

This one may have started from a Greek myth wherein the goddess Hera transformed her servant into a black cat who then aided the goddess of witchcraft, Hecate. As Christianity swept through Europe in the Middle Ages, witchcraft and black cats were aligned with the Devil, which made them agents of evil. But black cats can be good luck too! British sailors brought them on journeys for a safe return, Scottish folk thought riches were coming if they appeared at their door, and they could even bring a happy marriage in Japan.

In the debate between cats and dogs, this myth is often cited as a reason to choose a dog. But cats do form strong emotional bonds with their humans. Any cat pawrent who has experienced cuddles from a purring feline can tell you that the unconditional love from a cat is priceless.

All cats in the wild (save lions) live solitary lives. But domestic kitties have evolved to form bonds and alliances with their humans and other animals including dogs and other cats. Whether for safety, food, and shelter, or emotional support, it’s clear that your little tiger enjoys having a family.

Cats always land on their feet

Cats can safely land on their feet when they fall due to a righting reflex that allows them to twist around in the air. But they don’t always and can get injured. The Animal Medical Center has reported that falling from great heights, such as from an apartment or balcony, can cause trauma in a cat’s chest, limbs, or head, or even be lethal.

Cats can see in the dark

The myth that cats can see in complete darkness isn’t true, but they can see better in the dark than we can due to their pawmazing eye structure. With pupils that can let in more light, a higher number of rods, and an extra “mirror” layer in their eyes, they can capture more available light in low light conditions than we can, which allows them to navigate dark conditions easily.

While cats often roam and hunt at night, they aren’t actually nocturnal. Cats are most active just before dawn and just after sunset, making them crepuscular. They evolved this unique schedule to catch their prey, which may be why they wake you up before the sun rises and seem energized at dusk.

Cats purr only when happy

Cats do purr when they are content, but they also purr when they are sick or injured to help heal themselves. A cat’s purr vibrates between 2 Hz to 100 Hz, which can help to repair bones and soft tissues, ease breathing, and decrease pain. Have you ever noticed your cat wants to be near you when you are sick? They are trying to heal you with purrs!

While many cats dislike being submerged in water, there are plenty who love to play in it, or even enjoy a good swim, as online videos can attest. Like many big cats, several domestic cat breeds are known to enjoy the water, such as the Turkish Van, Bengal, Maine Coon, or Norwegian Forest Cat.

Cats seem to love milk, but all mammals are lactose intolerant once weaned, and shouldn’t drink any animal milk. After kittens start eating solid foods around 8 to 10 weeks of age, they lose the ability to digest milk and can suffer from gastrointestinal distress much like humans suffering from lactose intolerance.

Due to their independent natures and stubborn cattitudes, it may seem impossible to train a cat. But you can train a cat using positive reinforcement, meowtastic treats, and perseverance. Whether getting them to use the litter box, teaching them a trick, or even agility sports, you can bring out the superstar in your kitty!

This myth may have come from an ancient Hebrew story about Lilith who changed herself into a vampire cat to kill newborn infants, or from the superstitious Middle Ages when cats were thought to do the Devil’s or witches’ evil deeds. Cats do not actually steal breath, but they do sometimes sniff babies’ milky breath because they like milk. They also love to cuddle up in warm spots, perhaps near a newborn, and could accidentally suffocate them. Mix all these factors together with the sad fact that infants can die in their first year without any known reason and you have a recipe for a myth.

Cats flick or wag their tail when they are happy

Beware of cat tail language, as it isn’t as simple as dogs. A cat will flick or lash their tail when it’s agitated, or slowly wave it when they are focused on something, like a toy or prey. Watch out if they are whipping their tail back and forth, as that cat is angry or fearful. A happy cat sticks their tail straight up, usually with a slight bend in the very end, and if they like you, they may even wrap their tail around you.

With these cat mysteries solved, you can focus on showering your cat with love. Meow!