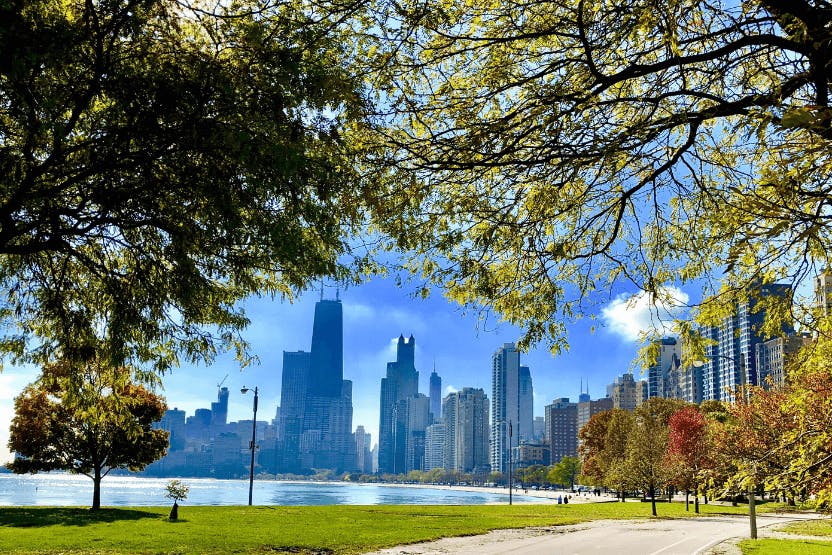 Chicago is fast becoming one of the most dog-friendly cities in the U.S. The first official off-leash dog park, Wiggly Field, was created in 1997, and the city’s pawsome dog parks have gradually increased since then. Now Chicago can boast that they have over 20 dog parks, and their number is growing to accommodate the city’s estimated 400,000 pooches.

While many dog parks are located inside large city parks, some of the newer ones are smaller, standalone neighborhood parks, but all provide a place for your pup to exercise and socialize leash-free!

In addition to their furtastic pooch parks, the Windy City hosts lots of other fun activities dog parents can do with their fur babies. The Cotton Tail Trail within Cotton Tail Park offers a half-mile loop featuring serene resting places and views. Or visit a dog-friendly restaurant to share a meal with your pup.

Every dog lover has a furvorite doggy playground or two, and their pupsters might also have a preference where they go to work off their zoomies. We’ve created a list of 5 of the best dog parks in Chicago, but there are many more – check them out!

Norwood Dog Park’s third of an acre is tucked within the larger, 14-acre Norwood Park, which offers a playground, sports courts, and a pool. While doggos must steer clear of these strictly human features, there’s plenty of open space for on-leash romping. In the designated dog park, however, all leashes come off and the pupsters can run and play with abandon.

In this fully-fenced puppy playground, fur babies have their very own pools for splashing and cooling off that's pawfect for those hot summer days, and a water fountain is available to keep everyone hydrated during the warm months of the year. Pet parents can relax and watch the play-by-play from the benches placed strategically around the sandy space. Flowering trees fill the air with fragrance in the spring and create furbulous shady spots until fall.

Waste bags are provided, but users are encouraged to bring some with them for good measure. As always, responsible pet parents are considerate of others and “pick up the poo.” City parks are open from the wee hours of the morning to late at night (6 AM to 11 PM) so there’s always time for a visit!

If you and your fur baby are looking for an off-leash dog park right on Lake Michigan, Jackson Bark Park is for you! Get ready for the fun and frolic you’ll find in this delightful green pocket with a separate small or shy dog section. Built atop four unused tennis courts, Jackson Bark was the first “unofficial” dog park on Chicago’s South Side, and it hasn’t lost its charm – or its fans! Built in 2014, it’s still one of the most visited puppy playgrounds in the city.

This park’s quirky features include a fire hydrant that shoots water into the doggy pools surrounding it, a Dodge Ram mini police car that’s just the right size for Fido, a mirror so the pupsters can see themselves, and re-purposed street signs that are both functional and decorative. But arguably the best feature of Jackson Bark is its agility course! The course offers a see-saw, a pyramid of tires, tunnels, hoops, an A-frame, and more!. If your pup isn’t in training, they’ll still love jumping on, around, and through these pawsome obstacles.

Large bottles of spring water sit next to multiple water bowls in the Pup & Pub area, but pet parents should remember to bring some water for their own thirst. Finding one of the tent-like covered shaded areas to stand or lie in provides some respite from the hot summer sun. Benches and chairs dot the park for some relaxation while watching the pups play.

Equipped with convenient free parking and lighting, a visit to Jackson Bark should be in Fido’s fur-ture. This is the place to run off some energy, and your pooch is sure to snooze all the way home!

Just a couple of blocks from Lake Michigan's Lake Shore East marina and seafood restaurants lies the Lake Shore East Park, known by some as Chicago's Front Yard. Within it, the very pupular Lake Shore East Dog Park is a jewel ready for playful neighborhood and outlying dogs alike. Small or shy dogs should be okay with mingling among bigger, more active fur buddies as there's no separate area for them.

While this isn't the largest dog park in Chicago, it can easily compete for the title of prettiest. Curving paved paths winding among the many shade trees and grassy surfaces give the park a feeling of lush nature, and its layout provides running and playing possibilities that are far more interesting than one wide-open space. Just outside the fence are tulip and rose beds, along with water features that give the impression of a fenced private garden.

Waste bag stations and trash receptacles remind dog parents to pick up after their pups. Numerous benches and a water fountain are also among the conveniences. Short stone walls are pawrfect for sitting or lying down in the shade to cool off, and the circular double gated entrance is roomy enough to avoid pups feeling claustrophobic.

When your fur baby is ready to depart, a leashed stroll around the host park is ideal for cooling down!  Its trails offer a lovely change of pace and the botanical gardens are delightful!

Like many dog parks in Chicago, Wiggly Park’s surface is largely asphalt, although there are small areas with sand and pebbles. Nature has adorned Wiggly with shade trees, planters, and walks. The surrounding fence is secured with double gates to stymie escape artists, and a run has been added to allow small, shy, or over-excited fur babies to chill out. Their parents can relax on the benches provided in the park, keeping their eyes on their fur babies.

One of the best features of Wiggly Park is the friendly community that supports and maintains it. A cheerful group, they make sure the park is clean by providing multiple trash receptacles and a waste bag station to help pet parents be responsible. A dog water fountain keeps Fido hydrated, but pet parents are advised to bring bottled water for themselves. A water bowl might be handy if your pup doesn’t enjoy sharing.

Dog parents and their pups who like to socialize with others will love Wiggly Park. Its friendly atmosphere and cleanliness make it a great choice for doggos who want to play!

This pupular dog playground sits on the shore of Lake Michigan, inside the Margate Fieldhouse Park, where visitors can bring their doggos on leash. But the fenced-in off-leash Puptown Dog Park is where the canine fun is! Secured with sturdy, attractive fencing and two separate double gates, Puptown Park is enjoyed by the pups’ parents, too.

Shade trees and beautiful plantings create a garden-like scene at the edges of this furbulous dog play space, but there’s plenty of room to cavort! With a combination of asphalt and gravel, the surface allows all styles of play. Small and shy dogs should be accustomed to being around large, playful puppers as there isn’t a separate section for them.

There’s ample seating for pet parents, including benches and a long, low wall under the shade trees. Dogs and humans alike can slake their thirst and stay hydrated at the dual fountain, and doggos have the use of doggy pools in the summer for a splashin’ good time! A waste bag station and plenty of trash receptacles remind pet parents to pick up after their fur babies. Once your pupster is zoomie-free, cool off with a stroll around Margate Fieldhouse Park before going home.  For a pleasant playtime in a green, serene park, Puptown is pawfect!

Chicago posts the same rules at all their dog parks to add consistency and reduce confusion. The rules are common sense guidelines to ensure the safety of everyone in the park, doggos included.

All canine visitors to city dog parks must be registered with the city and wear a city park permit. Yearly permits are $5 and can be purchased via an online registration form on the City of Chicago website.

These are just five of the best dog parks in Chicago – there are many more to explore with your pupster in this busy city! Dog parks give pups the opportunity to meet and socialize with other dogs, and their humans to do the same! Find the park that's just right for you and Fido today!

Does your furry pal need to brush up on their recall or manners? Book an in-home dog training session with Wag! today!

The Only Peanut Butter Dog Treat Recipe You'll Ever Need

Treat Your Dog with These 5 Easy Halloween Dog Treat Recipes