A Day in the Life of a Military Dog 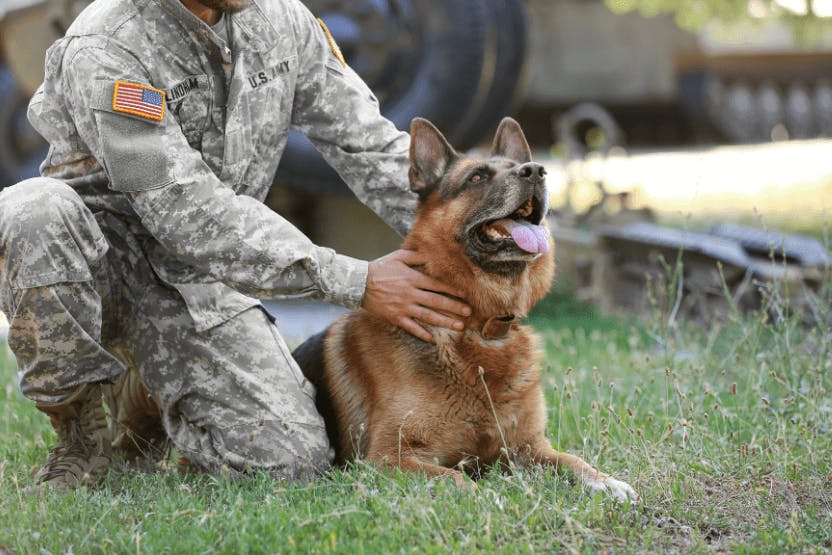 National K9 Veterans Day is March 13th, which means it's nearly time to raise a paw in salute of our four-legged fighters. Military working dogs (MWDs) perform essential work and have been around for centuries. Historians can trace military dogs all the way back over 2,400 years to the Kingdom of Lydia in Greece. Throughout ancient history, dogs fought alongside the Egyptians, Romans, and Persians.

Dogs were officially recognized as part of the US Army on March 13th, 1942, and today, there are approximately 1,600 patriotic pups fighting paw-in-paw with US armed forces around the world. But what does day-to-day life look like for our brave barking buddies? Here's a look at a day in the life of a military dog.

What jobs do dogs perform in the military?

The US military trains MWDs to perform many tasks that are impossible for humans. Their strong sense of smell makes them well suited to tracking, explosive detection, and drug detection. Meanwhile, their acute hearing makes them ideal for guard duty and patrols.

Military dogs are commonly deployed in search-and-rescue operations to sniff out civilians trapped under debris following natural and human-made disasters. K9 troops also have attack training to defend themselves and their handlers.

Each MWD must complete the Military Working Dog Training Program. During this 120-day program, dogs are trained for patrol and one other discipline, either explosives or drug detection.

Dogs also learn to respond to and cope with extremely stressful situations. For example, Coast Guard Petty Officer 1st Class James Grant and his partner pup, Sonya, practice being hoisted above ground by a helicopter:

MWDs are rarely deployed on the front line these days. However, some military mutts have undertaken special assignments. In 2019, Conan, a 5-year-old Belgian Malinois, took part in a raid in Syria, which led to the death of an ISIS leader.

What rank are military working dogs?

MWDs are actually part of the Air Force, training at the 341st Training Squadron in Joint Base San Antonio, TX. All military dogs are non-commissioned officers (NCO) with an honorary rank one place higher than their handler. The NCO status ensures each dog is treated with respect and isn't abused or mistreated by their handler.

The first dog to ever earn a rank in the military was Sergeant Stubby, a brindle Bull Terrier mix that served in the 102nd Infantry regiment during World War I.

Between WWI and 2000, MWDs were commonly euthanized or surrendered to enemy forces after fulfilling their minimum active-duty service requirement. That changed in 2000 with the passage of Robby's Law, which allows all eligible MWDs to be put up for adoption upon their return from active duty.

Which dog breeds are used in the military?

Belgian Malinois are a popular choice for the military thanks to their trainability, athleticism, and sharp sense of smell. On average, 70 puppies are born into the program annually.

The military uses other dog breeds for various jobs. For example, hunting breeds like Beagles and Jack Russells are sometimes used by the Department of Defense (DOD) for detection purposes only. Other breeds commonly used by the US military include German Shepherds, Dutch Shepherds, and Labrador Retrievers.

What do military dogs do on a daily basis?

Military dogs are trained to perform many tasks, which means their day-to-day activities will vary. Dogs raised as part of the DOD's Puppy Program are born at Joint Base San Antonio before being given to foster families at the age of 6 to 8 weeks old.

These military mutts spend 6 months with their foster families, training with the squadron monthly. They then return to base for rigorous training, where they're exposed to stimuli and situations that prepare them for military life.

At the age of one year, prospective MWDs take a "consignment test" to see if they're suitable for the military. This is the same test any dog purchased by the DOD must pass. Dogs who don’t pass the test are typically allowed to be adopted by civilians.

An adorable video posted on the DOD's website follows a day in the life of Ben, an MWD at Travis Air Force Base, CA. After being let out of his room in the morning, Ben goes outside to do his business, eat, and hydrate. Then, he hops in the car for a ride to training.

Ben begins by going out into the field to practice his search skills and identification skills. After a well-deserved lie down in the shade, Ben heads to meet to work with his canine compadres in the FBI, local police, and other government organizations.