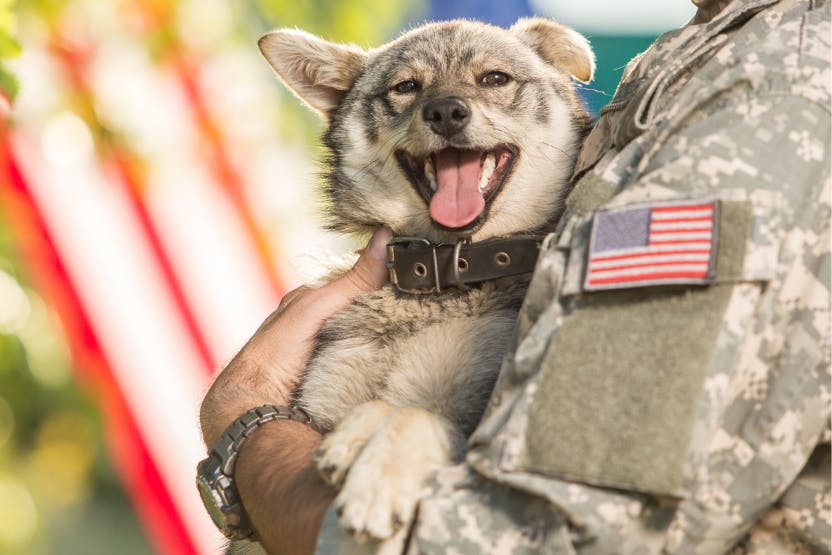 Veterans Day is November 11, but did you know there's also a K9 Veterans Day? It's coming up on March 13! To celebrate, we've sniffed out some of the most famous military dogs in US history. Keep reading to learn about their heroic deeds and legacies, plus how long it takes to train a military working dog and a brief history of war dogs.

The subject of several books and movies — including the 2018 film "Stubby: An American Hero" — WWI vet Sergeant Stubby had humble beginnings as a stray roaming the streets of New Haven, Connecticut. In 1917, he just so happened to wander onto the Yale University campus, much to the delight of 102nd Infantry Regiment soldiers camped there.

Yale University forbade pets on campus, but Corporal James Robert Conroy fell head over paws in love with the mutt. Conroy named him "Stubby" for his short tail. Stubby became the unofficial mascot of the 102nd Regiment.

In October of that year, the regiment deployed to France, but Cpl. Conroy couldn't bear to leave his four-legged friend behind. So Conroy smuggled Stubby onto the ship in an overcoat. In his 18-month tenure with the Army, Stubby participated in more than 15 battles, alerting soldiers of incoming enemy fire and locating injured infantrymen on the battlefield.

One night during the Meuse–Argonne offensive operation, Stubby was patrolling when he heard a shuffle near the trenches. He sniffed out a German spy, who then attempted to trick the dog. Stubby was too smart for him, though, and pinned him down until other soldiers arrived to capture him. Afterward, Stubby was promoted to sergeant — the only K9 veteran in American history to receive the honor.

Stubby made it home safe and sound, though not unscathed. He suffered injuries from mustard gas and grenade shrapnel, but recovered and lived a happy life with Cpl. Conroy, who went on to study law at Georgetown University.

He also met 3 US presidents — Woodrow Wilson, Calvin Coolidge, and Warren G. Harding — and led countless American Legion parades as a lifetime member. Stubby went to doggy heaven in 1926 and received a half-page obituary in The New York Times.

You might be surprised to learn the most decorated military dog of WWII was first and foremost a family pet!

The Wren family donated their beloved fur-baby, Chips, to the US Army in 1942. The German Shepherd, Husky, and Collie mix trained in West Virginia and served as a sentry dog for 3 years. He traveled all over the world, from North Africa to France and several countries in between.

In 1943, Chips showed unfaltering courage while on patrol in Sicily. Chips and his platoon were headed inland from the beach when they walked past a hut, from which enemy soldiers opened fire. As the humans ducked for cover, Chips bravely ran inside.

Four enemy soldiers emerged from the hut — 3 with hands held up in surrender and 1 with Chips' teeth clamped firmly around his throat. Chips' handler, John Rowell, later shared that he commanded the dog to let go "before he could kill the man."

Chips made it out of that attack alive but not uninjured. He suffered powder burns and a scalp wound that required medical attention. He went back to work the same day and captured another 10 enemy soldiers!

Chips returned home to the Wren family in 1945. For his service, Chips received 3 military honors: the Silver Star, the Purple Heart, and the Distinguished Service Cross. All 3 medals were later revoked due to complaints that military dogs don't deserve to win the same medals as human veterans. (We wholeheartedly disagree!)

Like Stubby, Chips also got to meet a few esteemed dignitaries in his day. But when President Eisenhower tried to pet him, Chips nipped at him!

In 2018, the UK posthumously awarded Chips the Dickin Medal for bravery. John Wren, who was a toddler when Chips was donated and deployed, accepted the award in his childhood pet's stead.

Last but most certainly not least on our list of famous K9 veterans is Conan. Named for TV personality Conan O'Brien, this beautiful Belgian Malinois hails from the Netherlands and plays a key role in covert missions. Conan's official title is special ops military working dog in the 1st Special Forces Operational Detachment-Delta. (That's quite the mouthful!)

We have fewer details on Conan than Stubby, Chips, and other famous K9 veterans. That's because his identity was classified until after the Barisha raid in October 2019. During the raid, Conan chased former ISIS leader Abu Bakr al-Baghdadi down a tunnel, where Baghdadi died by suicide after activating his explosive vest.

Although we don't know much about Conan himself, we do know a bit about what his rigorous training involves.

How long does it take to train military working dogs?

The US military often purchases military working dogs from Germany and the Netherlands, two countries that specialize in breeding dogs just for this purpose. The dogs are then brought to a training facility in Texas.

The dogs must first pass an extensive veterinary exam to confirm they have no health problems that will prevent them from serving for at least 10 years.

Military working dogs begin socialization training at 8 weeks old. They're adopted temporarily and placed in a home setting for about 5 months before returning to the training facility. Then, they enter the K9 War Dog Program, a 120-day course that covers everything from basic obedience to narcotics and explosives detection.

While the jobs they're tasked with are classified, special ops dogs are highly skilled. Some can run faster than 30 miles per hour and bite hard enough to break a human wrist in seconds. They're even trained to free-fall from airplanes and rappel alongside their handlers.

Most military working dogs serve an average of 8 years. After they retire, many dogs are adopted by their handlers.

A brief history of military dogs

Humans have enlisted the help of military working dogs since at least 600 BCE. One of the oldest named war dogs ever recorded is Lethargos, who fought alongside a mounted horseman in an ancient Greek civil war. The human, dog, and horse were all buried together.

Military working dogs became more commonplace in World War II. Shortly after the attack on Pearl Harbor, a group of civilians created the Dogs for Defense (DFD) group. DFD helped recruit over 40,000 civilian dogs to join the fight. Although all breeds were eligible to join ranks, only 25% of the donated dogs made the cut. Among the most popular breeds chosen were Doberman Pinschers, Boxers, and Labradors.

So many American pet parents donated their dogs to the war effort that country music star Red River Dave released a song about it: "I'd Like to Give My Dog to Uncle Sam". More than 500 veteran dogs returned to their pet parents and lived out the rest of their days in peace.

This K9 Veterans Day, we hope you'll "paws" to salute all war dogs past and present. Share this story with your friends and fellow pet parents, and invite them to honor our K9 veterans too!