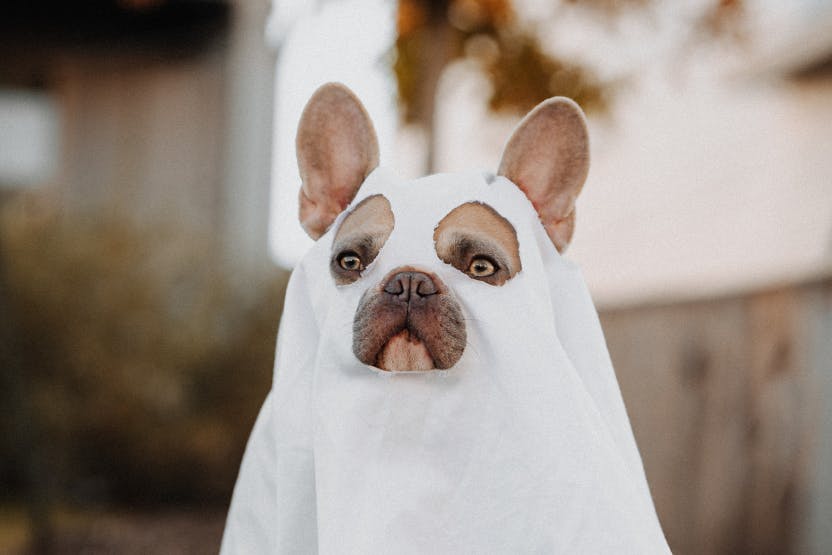 The night of frights is fast approaching. Have you found your dog's costume yet? If you're reading this, chances are you're still searching for some dreadful duds. But don't worry — your secret is safe with us!

To help you find a spooktacular, family-friendly costume, we've sniffed out 5 of the hottest pop culture trends of 2021. We've also included some honorable mentions — these costume ideas might be a little tricky to pull off, but if you can manage it, you'll be the talk of the Halloween "pawty"!

Before you splurge on one of these trendy Halloween costumes for dogs, make sure your pooch is comfortable wearing clothes. Not all canines will be keen to wear elaborate costumes. For more tips on choosing the right costume, check out our related guides:

Pokémon Brilliant Diamond and Shining Pearl, remakes of the original 2006 Pokémon games, will drop on November 19. What better way to celebrate the upcoming release than dressing up your own little pocket monster for Halloween? Etsy is packed with cute Pokemon costumes for canines. Eevee, Pikachu, Squirtle — you and Fido are spoiled for choice!

"Teenage Mutant Ninja Turtles: Shredder’s Revenge" for the Nintendo Switch is dropping on December 17. This beat-em-up game promises to be a blast to the past, complete with retro graphics and game mechanics. If you're a fan of the franchise, look no further for your 2021 Halloween costume idea!

Sure, you can go out and buy TMNT costumes for your two- and four-legged children. But where's the fun in that? If you're the crafty kind, head down to your local art supply store and let your imagination run wild. Just Google "Teenage Mutant Ninja Turtles DIY costumes for dogs" and prepare to be inspired!

Look, we know his name is technically Grogu, but he's still Baby Yoda to us. And yes, season 2 of "The Mandalorian" technically dropped last October. But since a lot of us didn't get a proper Halloween last year, we had to include it in this year's roundup!

"Monsters at Work" premiered on Disney+ in July, bringing back lovable goofballs Sulley and Mike Wazowski. The protagonists of the hit Pixar films join a new cast of monsters for fun adventures in Monstropolis.

This is the "pawfect" costume idea for families with dogs and young children. Got a doggo who doesn't like dressing up? Keep it simple with a Monsters, Inc. bandana. Or, go all out with a faux fur Sulley costume from Etsy.

Scooby-Doo and Guess Who?

No article on Halloween costume ideas for dogs would be complete without "those meddling kids"! Sure, you could dress up as one of the other members of the Mystery Inc. gang. Or, you could get creative and borrow some ideas from Scooby-Doo's latest spinoff. (If you haven't watched it yet, season 2 aired earlier this month on HBO Max.)

"Scooby-Doo and Guess Who?" features uber-famous guest stars like Jason Sudeikis, Lucy Lui, Mark Hamill, and Kirsten Schaal. This 2021 dog Halloween costume idea is super simple — all your doggo needs is a teal collar! Meanwhile, you can choose which guest star you'd to dress up as. Fictional guests include Batman, The Hex Girls, and even the ghost of Abraham Lincoln.

The following dog Halloween costume ideas for 2021 might be hard to pull off, but we thought we'd include them anyway since they were so "pawpular" this year!

Anticipated to be the top Halloween costume this year, Squid Game has taken the world by storm. Want to include your fur-baby in the fun? Search for a red or green tracksuit for dogs, and you're pretty much covered!

But finding a matching Squid Game costume for yourself in time for Halloween might prove a bit more difficult. According to reports, high shipping costs, high demand, and worker shortages are causing delays.

The latest installment of the Far Cry franchise is one of the most explosive yet. If you're planning to dress up as player character Dani Rojas, why not let your pupper play Chorizo? This in-game follower is a doggone adorable Dachshund who's in a doggy wheelchair.

His ability is called Attention Seeker: "Chorizo is super cute, and he’ll use his cuteness overload to distract opponents." We're willing to bet your doggo has a similar perk!

If you're the proud parent of a Dachshund or a small dog who's an amputee, this is the "pawfect" Halloween costume idea.

18-year-old tennis prodigy Emma Raducanu made history in September when she became the first British woman to win a Grand Slam singles championship since the late '70s. Both two- and four-legged tennis fans might like to honor her achievement this Halloween with a cute costume.

Emma's iconic kit is available at select sports retailers, but good luck finding a canine version! (Don't worry, though — Etsy and other online retailers are peddling plenty of tennis-themed shirts and outfits for dogs.)

People went dog wild for Olivia Rodrigo's heartbreak anthems this year. If you and Lassie are die-hard "Livies", why not grab a pair of blue cheerleader costumes to pay tribute to the music video for "good 4 u"? You'll find a few options for your four-legged cheerleader on Amazon and eBay!

Trying your paw at one of these ideas this year? We'd love to see your costumes! Share your snaps with us on Instagram @wag — don't forget to tag #wagwalking.

From all of us here at Wag!, have a “fangtastic” Halloween!