Pit Bulls: 5 Reasons Why We Love Them 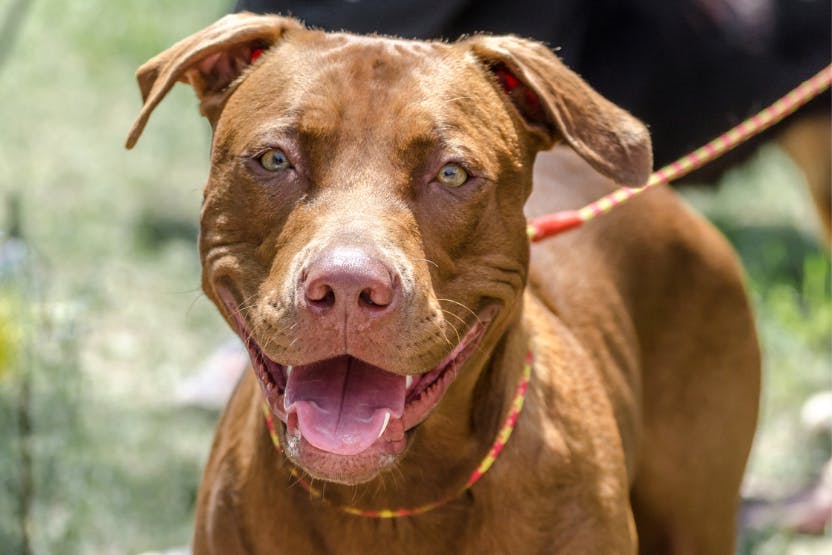 National Pit Bull Awareness Day (NPBAD) is just around the corner! Started in 2007 by Tennessee-based rescue Bless the Bullys, this annual event takes place on the last Saturday of October (unless Halloween falls on the last weekend of the month).

Happening on October 23rd this year, NPBAD aims to change perceptions and stereotypes about Pit Bull-type dogs, which include the American Pit Bull Terrier, American Staffordshire Terrier, Staffordshire Bull Terrier, and American Bully. Read on to learn more about these furrific canines that have been nicknamed “America’s Dog” and why we love them!

There are several reasons to fall in love with a Pit Bull. Here are just a few of them!

They can skip trips to the groomer

When it comes to grooming, Pit Bulls are pretty low-maintenance. While daily brushing is still recommended for a clean and healthy coat, Pitties don’t require frequent bathing. Once a month is fine, though it can even be extended to every six months since they don’t have a particularly strong odor. Their short coats also mean that bathing can be done in very little time and that they don’t need to get doggie haircuts.

Pitties are intelligent and eager to please, thus making them highly trainable. Unfortunately, their desire to please has been exploited by people with harmful intentions, contributing to their negative reputation.

However, with proper guidance and consistent training, a Pibble can flourish and impress everyone with their obedience skills. In fact, many have gone on to become successful therapy dogs, agility champions, search and rescue dogs, and more.

Pit Bulls are people-oriented dogs who have shown their devotion to their families time and again. They’re fond of people of all ages and are especially kind towards children, even being dubbed “nanny dogs” due to their natural caretaking instincts.

Of course, all dogs regardless of breed should be supervised when around children, and all children should be taught how to interact with animals as well.

They’ll make you laugh — a lot!

Pitties make woofderful companions for many reasons, one of which is that they’re natural entertainers. With personalities as big as their smiles, they can often be seen showing off their goofy side and clowning around. You’ll never go a day without laughing at a Pit Bull’s hilarious antics. Moreover, they maintain their playfulness even as they get older.

Once you become a Pit Bull parent, your days will be filled with cuddles and kisses. Pibbles are extremely affectionate and will constantly remind you of the fact; whether you’re on the couch or in bed, you can expect your Pittie to come snuggle with you. They’ll even attempt to climb into your lap, forgetting that they’re not exactly lap dogs!

The biggest myth about Pit Bulls

Pit Bulls are often portrayed as more aggressive and more dangerous than other dogs, but this couldn’t be further from the truth. A study published in 2008 found that there was no significant difference in canine aggression between dogs affected by breed-specific legislation (such as Pit Bulls) and Golden Retrievers (which served as the control group).

Other studies also confirmed that breed is not a determining factor for canine aggression; no single breed is inherently more dangerous than another. One study published in 2000, which looked at dog bite-related fatalities over a period 20 years, revealed that 72% of the cases were attributed to non-Pit Bull breeds.

Meet these pawsome Pit Bulls whose stories will definitely put a smile on your face!

Maisy, the rescue Pibble who saved her mom

For three years, Maisy lived in a backyard and was only brought out of her kennel to be bred. But since she never got pregnant, her humans decided to put her down. Fortunately, a family friend stepped in and brought her to a rescue. That’s where she met her new mom, Marisa.

For Marisa, adopting Maisy couldn’t have come at a better time. She had just lost her 13-year-old dog and both her parents, so she needed something to cheer her up and reassure her that she wasn’t alone. Maisy ticked all the boxes with her goofy personality. According to Marisa, Maisy has transformed her life and brightened everything up ever since she brought her home!

For a long time, it didn’t seem like Mr. Breakfast’s story was going to have a happy ending. He had been rescued from a dogfighting ring and adopted a couple of times, then bounced between fosters for years. He was also deaf and had behavioral issues because he was never trained.

But Mr. Breakfast’s luck turned around after meeting his mom Liz. Liz had worked with deaf dogs before, and she just knew that they were meant to be together.

Given his background, Mr. Breakfast didn’t connect with Liz right away. But after she enrolled him in canine surfing classes, he learned to trust her. Their communication improved, and their bond grew stronger. Liz says Mr. Breakfast constantly reminds her that no matter how bad you’ve had it in the past, you can still be happy!

Anne is a foster with her local animal rescue. Last year, the rescue had two newborn puppies that she ended up raising. Since they were so young, they had to be bottle-fed every hour and a half. Thunder, Anne’s Pit Bull, accompanied her on every late-night feeding and watched over the puppies.

When they got bigger, he brought them toys and tried to get them to play with him. He even “taught” them to sit! Thunder was sad when the puppies were eventually adopted, but it wasn’t long before Anne welcomed another foster. According to her, Thunder loves the fostering process as much as she does and that he literally jumps for joy when he meets puppies!

Why do you love Pit Bulls? Share your thoughts with us in the comments or on social media!