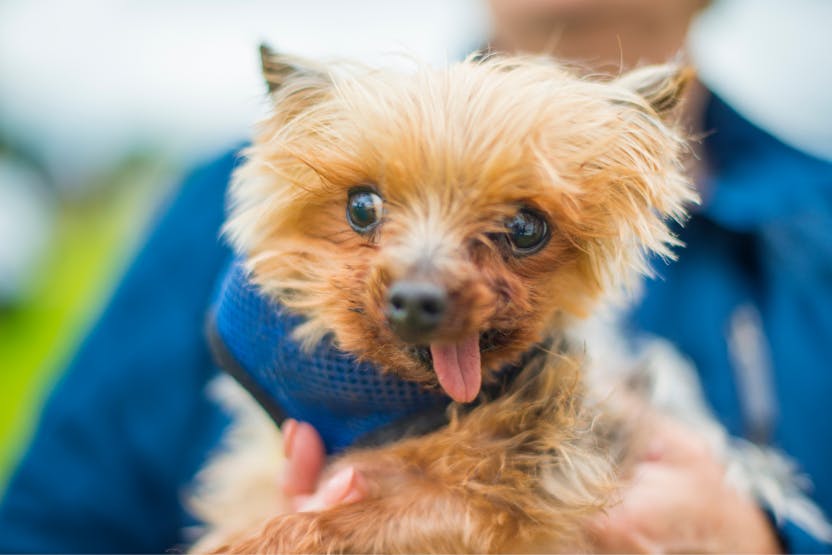 While it may seem cruel, the World's Ugliest Dog Contest isn't about poking fun at ugly dogs. It teaches people that all dogs deserve love, regardless of their appearance, and that pups don't have to meet breed standards to be celebrated. Because many of the dogs featured in the World's Ugliest Dog Contest were adopted from shelters or puppy mills, the event also helps raise awareness about animal abuse.

To celebrate the long-awaited return of this quirky contest, we've sniffed out 10 of our favorite past winners. Let's take a look!

Scamp the Tramp is the most recent winner of the World's Ugliest Dog Contest. This dreadlocked doggo is of unknown breed, but his unique characteristics certainly make him stand out from the crowd. Scamp the Tramp is known for his stuck-out tongue, two-inch legs, and large ears.

Scamp's story is adorable, too. His pet parents found him wandering the streets of Compton, "licking Taco Bell wrappers". Scamp likes to spend his spare time working as a reading dog for first-graders and senior citizens.

Zsa Zsa was rescued from a puppy mill before being adopted by Megan Brainard. She beat 13 other competitors, including a messy-haired Pekingese appropriately named Wild Thang.

Related: 3 Things You Can Do Right Now to Help Stop Puppy Mills

Pint-sized pooches tend to win the World's Ugliest Dog, but Martha is certainly an exception. She instantly won over judges by slumping on stage and refusing to do any tricks!

This 125-pound Mastiff, with her heavy, floppy face, nearly went blind due to the neglect. But, after being rescued by Sonoma County's Dogwood Animal Rescue Project and several successful operations, she's able to see and is living her best life. Her current pet parents describe her as a gassy, silly, gentle giant.

The uniquely named Sweepee Rambo is one of two blind Chinese Crested Dogs to make our list. (You'll meet Sam, the other one, later!) Sweepee won the crown of the World's Ugliest Dog at the old age of 17. He became the champion after their lucky third time competing.

Sweepee was originally a gift to pet parent Jason Wurtz's wife. But, following their split, Jason took ownership of Sweepee after his wife deemed the dog too ugly. Wurtz clearly loved this pooch — he liked taking Sweepee for rides on his motorcycle, and he even ran a "Sweepee for President" campaign in 2016. Cute!

2015's 10-year-old champ Quasi Modo is sure to make you do a double-take. This Pit Bull-Dutch Shepherd mix was born with a congenital disability in his spine that gives him a short body and hunched back.

While some people find Quasi Modo's appearance frightening, he's actually a sweetheart. He was abandoned at a shelter in Loxahatchee, FL, before being adopted by a vet. Now, he's one of the World's Ugliest Dog Contest's greatest champions!

Peanut, an unknown breed from Greenville, NC, won the World's Ugliest Dog Contest in 2014. A victim of animal abuse, Peanut's story is a sad one. He was badly injured in a fire and, as a result, has no lips or eyelids.

His pet parent, Holly Chandler, wanted to showcase Peanut to help raise awareness about animal abuse. She said the $1,500 prize money would go towards paying for Peanut's vet bills.

2011's champion, a Chinese Crested and Chihuahua mix named Yoda, was found abandoned behind an apartment building. Due to her shaggy appearance, her parents thought she was an overgrown rat upon first glance.

With her snub-nosed face, tufts of blonde fur, and Star Wars-esque ears, Yoda is easily one of the cutest canine contestants to grace the Sonoma-Marin Fair. Sadly, having won the crown at the age of 14, Yoda didn't get a chance to defend her title and passed away 8 months after winning.

2009's winner Pabst caused an upset in 2009 when he beat two Chinese Cresteds, Miss Ellie and Rascal, to the World's Ugliest Dog crown. Pabst is a Boxer mix with a particularly pronounced underbite.

His pet parent, Miles Egstad, says he named Pabst after Pabst Blue Ribbon as he resembles the "bitter beer face" made famous by Keystone Light ads from the 1990s.

Elwood the Chinese Crested is instantly recognizable due to his white mohawk. He was rescued as part of an investigation by the NJ Society for the Prevention of Cruelty to Animals. His breeder was going to have him euthanized as they thought he was too ugly to sell.

He was adopted by Karen Quigley, who was so taken by his story that she decided to write a children's book about his life. Everyone Loves Elwood teaches children about accepting others, even if they look different.

Of all the breeds that have competed for the World's Ugliest Dog crown, Chinese Crested Dogs have taken the crown the most. And Sam is arguably the greatest Chinese Crested contender of them all.

Sam is a triple-crown winner, having won the contest three times between 2003 and 2005. He was adopted from a shelter in Santa Barbara and lived until the ripe old age of 15. Sam was completely blind, but that didn't stop him from starring in a Halloween special of Criss Angel's Mindfreak.

Think your doggo might give some of these winners a run for their grand prize money? Share pics of your pupper with us on Instagram @wag for a chance to get your photo featured on our page!