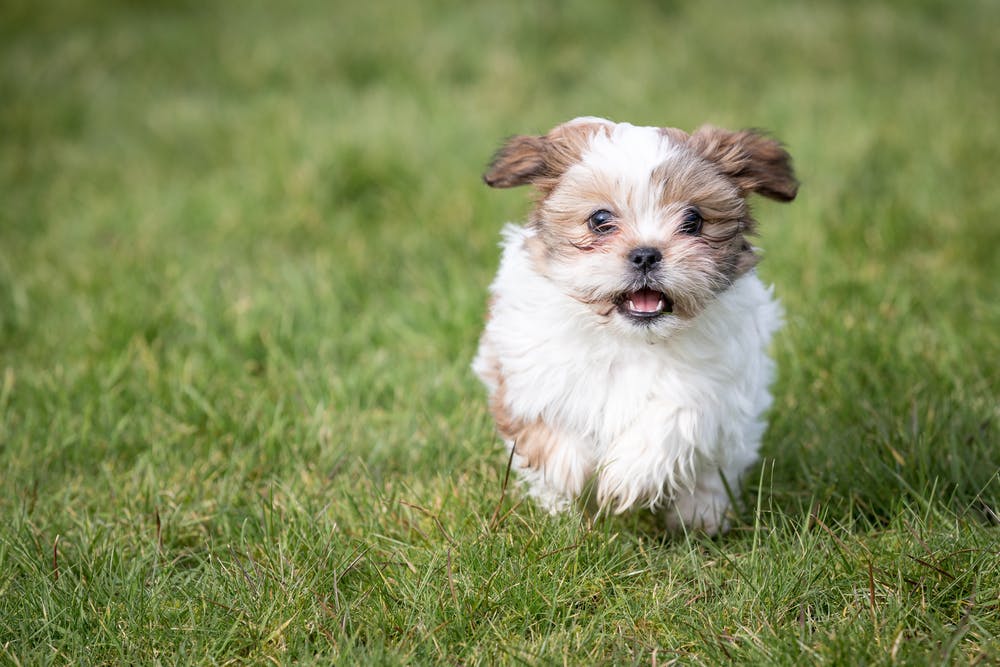 A condition is termed “congenital” if it’s present at birth. It may be hereditary, but it may also be caused by environmental factors during pregnancy, as well as nutritional deficiencies or trauma. Some congenital conditions, while present at birth, don’t exhibit symptoms until post-puppyhood.

It’s estimated that congenital conditions are present in 0.2 to 3.5 percent of all births. They can occur in any body area, including the eyes, cardiovascular, neurological, musculoskeletal and genitourinary systems. Sometimes they’re caused by a combination of genetic and environmental factors. Let’s take a look at five of the most common congenital conditions in puppies.

A cleft palate is an opening between the roof of the mouth, or palate, and nasal passages. It can interfere with breathing and eating and lead to complications such as malnourishment and pneumonia. It may go undetected until symptoms of complications appear. Puppies who have large, round bellies from swallowing air instead of milk, or who have continuous respiratory symptoms should be checked out by your veterinarian. A cleft lip often accompanies a cleft palate.

Puppies born with a cleft palate may have any or all of the following symptoms:

Symptoms may vary depending on the severity of the cleft palate and lip. If not treated, this congenital defect can lead to malnourishment and pneumonia, and can be fatal.

A cleft palate results when the two sides of the hard palate don’t fuse normally before birth. While genetics is considered the most common cause, it may also be influenced by maternal factors during pregnancy, such as:

Purebred dogs with small or pushed-in faces, known as brachycephaly, are most likely to be born with a cleft palate. Susceptible breeds include Pekingese and French Bulldogs.

A cleft palate is diagnosed by an examination of the mouth by a veterinarian. If the cleft extends toward the back of the mouth, sedation may be required to see it entirely. X-ray imaging will indicate whether pneumonia has arisen and needs to be treated.

Surgery is required to close a cleft palate and/or repair a cleft in the pup’s lip. Because puppies’ mouths are so small, surgery can be difficult. The vet may decide to postpone it, meanwhile nourishing the pup through a feeding tube until the age of three to four months. In some cases, cleft palates close up partially as the dog grows. Pet parents can be taught to place the tube before every meal, or the vet may insert it through an incision in the side of the neck and into the esophagus. Once the puppy has grown sufficiently, surgery can be performed to permanently close the fissure.

PDA is a common congenital defect in puppies, with certain breeds like the German Shepherd and Chihuahua more susceptible to it. A blood vessel called the ductus arteriosus shunts blood within the heart before a puppy is born. The vessel is meant to close with the puppy’s first breath outside the womb, but from time to time, it stays open and continues to allow blood to circulate between the right and left sides of the heart. This condition is known as Patent Ductus Arteriosus. The condition prevents full oxygenation of blood in the lungs.

Symptoms of this congenital condition are the result of poor oxygenation. In some cases, there are no symptoms at all, but the veterinarian will detect the following on examination:

More severe PDA in which the blood flows from the right to the left side presents with the following symptoms:

The tendency to form a patent ductus arteriosus is genetic, but whether a pup is born with it can also depend on maternal factors such as:

A physical examination will reveal palpable vibrations on the outside of the chest wall. An audible murmur through a stethoscope is a cardinal sign as well. A history obtained from the pet parent may reveal some or all of the above symptoms.

To arrive at a diagnosis of PDA, the vet may recommend chest x-rays, an echocardiogram, and cardiac ultrasound. Blood tests will show signs of anemia (low red blood cell count) and poor oxygenation.

Two kinds of interventions can be used to close the opening between the two sides of the heart. Open heart surgery allows for direct visualization of the defect and requires anesthesia. A procedure done during cardiac catheterization, which is a less invasive procedure, involves the placement of obstructive objects that allow the formation of clots that close the deformity.

Prior to either intervention, the pup may require medications to control high blood pressure and excess fluid in the heart, common signs of congestive heart failure.

Cryptorchidism is also known as an undescended testicle, where one or both testicles fail to drop normally into the scrotal sac shortly after birth. Instead, it lodges somewhere along the path from the abdomen to the sac. The condition can affect both small and large dogs, with purebreds being most susceptible because of the condition’s genetic nature.

In an unaffected puppy, the testes should descend to the scrotum by 8 to 16 weeks of age. Once descended, they are easily visualized between the dog’s back legs. One secondary condition of cryptorchidism is when the spermatic cord twists upon itself, causing severe pain. If this complication is absent, the pup typically feels no pain.

Other abnormalities often associated with cryptorchidism are not a result of the undescended testicle, but may exist alongside the condition. They include:

If the retained testicles are not removed, a cancerous tumor may develop that secretes female hormones, causing the dog to take on feminine traits such as squatting to urinate. If the other testicle is descended, it may shrivel, leading to pain during urination, infertility, and infection. If left unattended, the dog may also develop estrogen toxicity.

This condition’s origins are genetic, involving both maternal and paternal familial lines.

Physical examination reveals a lack of one or both testicles in the scrotum. Sometimes a retained testicle can be felt along the scrotal path or in the abdomen.

Removing both testicles, i.e., neutering, is the usual treatment for cryptorchidism. It’s not recommended that a single descended testicle be spared. Dogs with cryptorchidism are much more likely to develop testicular cancer than fully intact or neutered males. Leaving one testicle also may lead to other painful complications for the dog.

An umbilical hernia is a congenital defect in the abdominal wall around the navel that can allow abdominal contents to protrude. Umbilical hernias can be traced back through familial lines in such breeds as the Airedale Terrier, Pekingese, Maltese, and Basenji. Normally, the umbilicus closes shortly after birth but in umbilical hernia it remains partially open.

The swelling around the navel caused by protruding stomach contents is the cardinal symptom of an umbilical hernia. Depending on its size, the hernia may be manually reduced (pushed back in), or if it is larger, it protrudes persistently. In large hernias, internal organs may be deprived of blood, causing them to function poorly, or in severe cases to actually strangulate and die.

Symptoms of an umbilical hernia, particularly a large, irreducible one may include the following:

Normally, before birth, the muscles surrounding the navel are open, allowing the blood vessels of the umbilical cord to pass through and nourish the unborn puppy while carrying away unoxygenated blood. This muscular structure is known as the umbilical ring. If the ring fails to close, an umbilical hernia is the result. It is widely accepted that the cause is genetic.

During a physical examination, the veterinarian can easily see and feel the protrusion in the navel area. Further details can be found by x-rays or ultrasounds that provide images of organs that may be entrapped in the opening, as well as the severity of the defect.

Small umbilical hernias may close within six months of birth without treatment. If the hernia is large, surgery is required to prevent damage to the abdominal wall and internal organs. During surgery, excess tissue from scarring is removed and protruding organs are placed back within the abdomen. Finally, the opening is closed with sutures.

Pulmonic stenosis is a congenital disorder in which the semilunar valve leading from the heart to the pulmonary system becomes thickened and stiff, impeding its ability to close normally. This allows blood to flow back into the heart without being supplied with oxygen to nourish the body’s cells. In certain cases, the valve leaflets fuse entirely. Several dog breeds are more likely to be born with pulmonic stenosis, including Jack Russell Terriers, Labrador Retrievers, and Boxers.

Some dogs have no symptoms with their pulmonic stenosis if the valve involvement is minor. However, more severe valve problems may cause the following symptoms:

The cause of pulmonic stenosis is genetic, and breed-specific.

A trip to the vet is crucial if you notice that your young pup seems to be having any of the above symptoms. The veterinarian will obtain a history from you and do a physical exam. During the exam, there will be a noticeable heart murmur.

In order to narrow down the severity of the condition and rule out other causes, the vet will perform imaging procedures such as x-rays, cardiac ultrasound, and angiography. Angiography will demonstrate the blood flow through various vessels and the ultrasound can measure blood volume and pressure passing through the valves. An electrocardiogram may be done as well.

To start, your veterinarian may order medications such as beta-blockers to optimize the work of the valve, and beta-adrenergic drugs to allow the heart to work more efficiently and keep blood flowing in the right direction.

A procedure called a valvotomy may then be done to widen the valve opening and make it more flexible. The valvotomy utilizes a balloon within a catheter to do this. The catheter is threaded into the valve using fluoroscopy and when it’s positioned correctly, the balloon is inflated to enlarge the opening. When the valve opening has been enlarged sufficiently, the balloon catheter is removed. Following the procedure, medications may be adjusted and the veterinarian will want to assess how well the heart is working.