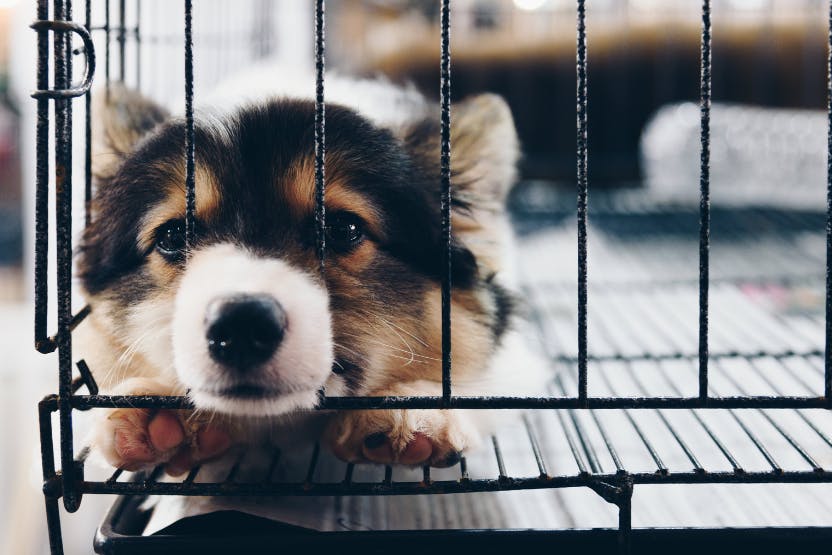 Puppy mills are a surprisingly common across the country. A staggering 10,000 puppy mills operate in the US, selling puppies to unsuspecting pet parents solely for profit.

Yes, puppy mills are cruel. Regardless of the number or type of dogs being bred, puppy mills view animals as a path to profit rather than sentient, emotionally intelligent beings. Because puppy mills treat dogs as products rather than pets, dogs don't receive proper care, affecting their mental and physical well-being.

How are puppy mills still legal in the US?

So, considering their abusive practices, how are puppy mills still legal? Animal cruelty is a complex issue in the US, and passing legislation regarding puppy mills isn't straightforward.

Currently, the Animal Welfare Act of 1966 regulates how breeders should house and care for many animals, including dogs. This law states that puppy mills must hold licenses and pass inspections administered by the USDA.

According to the Humane Society of the United States (HSUS), USDA inspectors rarely issue fines or revoke the licenses of puppy mills that violate the Animal Welfare Act.

In the past, efforts to change federal legislation regarding puppy mills has struggled to gain support, and proposed law reforms aren't usually precise enough to completely ban puppy mills.

Lawmakers and animal rights organizations are working hard to pass new laws that protect dogs from abusive breeding practices. One example that's supported by HSUS is The Puppy Protection Act, which aims to update the Animal Welfare Act. This bill would require puppy mills to provide adequate space, two meals a day, temperature control, and more to their dogs.

In December 2021, lawmakers in Congress introduced Goldie's Act (H.R. 6100). This bill aims to clear up the definition of a violation under the Animal Welfare Act, increase fines, and clamp down on the suspension and revocation of licenses. Goldie's Act is named for a Golden Retriever who passed away due to neglect at a puppy mill in Iowa.

Consider contacting your local congressional representative to encourage them to support these bills.

As well as HSUS, many organizations across the US are helping raise awareness about puppy mills. A few examples include:

These organizations and many more are helping fight against puppy mills. Consider donating to one of these organizations to help support their efforts if you're able. Or, share with your friends and family to spread awareness.

How to tell if your dog is from a puppy mill

With over 2 million dogs born in puppy mills annually in the US, there's a good chance that many pet parents unknowingly purchased a dog from a puppy mill. According to The Puppy Mill Project, puppy mills are most common in the Midwest, and Missouri is the state with the highest concentration.

Dogs that come from puppy mills are more likely to have health problems due to poor care, as well as behavioral problems from traumatic experiences. One of the best ways to fight this cruel industry is to learn the signs so you can avoid buying dogs from puppy mills in the future.

Common signs a dog is from a puppy mill or backyard breeder include:

The best way to avoid puppy mill dogs is to avoid buying your dog online or from a pet store. Many dogs available to buy in pet stores are sourced from puppy mills. Meanwhile, online selling is a great way for puppy mills to conceal their business practices.

Key takeaways and next steps

We know "Adopt, don't shop" is so common that it's nearly a cliché, but adopting from a shelter really is the best way to ensure you're not supporting the puppy mill industry. Plus, it gives animals in need a new "leash" on life!

Want to learn more about animal rights, or preparing to adopt your next fur-child? Check out our related guides: