How to Protect Your Dog from Coyotes 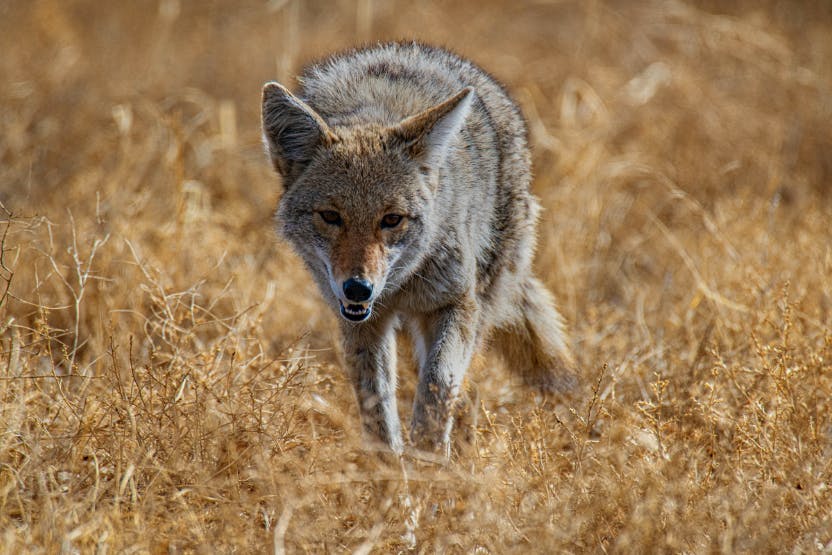 The chances of you and your canine compadre bumping into a coyote have increased drastically over the past century. Once only present in the western two-thirds of the US, coyotes now thrive in 49 states, as well as large swathes of Canada. Step out into the wilderness after dark, and there's a high chance you'll hear a coyote's haunting howl in the distance.

Coyotes are very closely related to dogs, but that doesn't mean coyotes and dogs get along. If you live in the country, love exploring the great outdoors, or just have a lot of wily coyotes in your area, it's worth taking some precautions to protect your fur-baby.

Coyotes do attack dogs, and the likelihood of an attack is rising due to natural habitat loss and a growing familiarity with humans.

The Urban Coyote Research Project studied coyote attacks on dogs between 1990 and 2004 in the Chicago metro area. The study found that coyote attacks increased in frequency from 0 to 2 a year to 6 to 14 a year by the end of the study. The report also showed that coyotes targeted 30 different breeds, including 3 medium and 6 large breeds.

While this study is slightly dated, it does show that coyotes attack dogs and that such instances became more common over the 15-year period. A quick Google search for coyote attacks in California turns up dozens of articles detailing coyote attacks on dogs.

While coyotes will generally avoid humans and dogs, they may come looking for food in urban areas if they're hungry enough or lose their fear of humans. You shouldn't be afraid of coyotes, but give them your full respect by keeping away and not interacting with them.

Do coyotes attack dogs during the day?

It's common knowledge that coyotes are mainly active after the sun sets, but should you worry about a coyote attacking your dog during the daytime? While coyotes are more likely to attack at night, coyotes can also attack during the day.

As mentioned, coyotes can become used to people through frequent interaction and hand-feeding, which may cause them to come near your house during the day. Coyotes will also hunt during the day if there are no people around. So you may see coyotes during the day if you live in a rural area.

Coyotes are also more likely to attack during the winter. Winter is breeding season for coyotes, which drives them to hunt more to feed their latest litter.

As coyotes and dogs are close relatives, you might be wondering whether a coyote can lure a dog away from their pet parents. In fact, it's a myth that your dog can be lured away by coyotes.

That said, if a coyote is close by, your dog could hear or smell the coyote and give chase. Your pup's reaction to sensing a coyote will change depending on the individual. Some dogs may be on guard, while some may try to chase it. It's important to train your dog to come when called and to stay to stop your dog chasing a coyote.

Coyotes are highly family-oriented and don't use family members as bait or to lure prey. Coyotes mate for life and co-parent their pups, so they're unlikely to put a precious member of their pack at risk to lure a large animal.

Can coyotes mate with dogs?

While coyotes don't actively lure dogs, that doesn't mean your dog can't accidentally attract coyotes. It's a little-known fact that dogs and coyotes can mate and have puppies called Coydogs. If you have an unneutered or unspayed dog in heat, a coyote may attempt to mate with them.

While there's no conclusive research on the subject, there is evidence suggesting certain dog breeds fare better against coyotes than others. Coyotes don't usually see domestic dogs as prey and are especially wary of larger dogs.

Coyotes typically hunt solo but have been known to hunt in packs to take down deer. So a coyote is unlikely to target a large dog breed if they're far from their pack. Earlier in this article, we mentioned that the Urban Coyote Research Project found that coyotes living in the Chicago metro area attacked 30 dog breeds over a 15-year period. Of those, 20 were small breeds.

Over the past few decades, farmers looking to protect livestock have turned to large foreign dog breeds for added protection. European breeds, such as Great Pyrenees, Komondor, and Akbash, have been very successful in protecting sheep from coyotes in America's rangelands. For example, reports suggest these breeds reduced coyote attacks on sheep in North Dakota by 92%.

So, while larger dogs seem less likely to be attacked by coyotes, there's no concrete research to suggest one breed is better protected against coyotes than another. A dog's physical condition will largely determine how well they cope with a coyote attack.

How do I protect my dog from coyotes on a walk?

The best way to protect your dog from coyotes while walking is to keep them on a short leash. Coyotes are generally wary of humans and won't approach your dog if they're close to you. That said, you shouldn't leave your dog tethered outside your home overnight, as they won't be able to defend themselves or flee from an attack.

Loud noises are a proven way of scaring off coyotes, so consider bringing along a horn or bell on your next wilderness walk. You can also try throwing sticks and stones to scare them off. If a coyote continues to approach, back up slowly. Don't turn your back and run, as this may encourage them to give chase.

Pet insurance can protect your pup from illnesses and accidents like coyote attacks. If your dog is at risk of being attacked by a coyote, check out our pet insurance comparison tool. Brought to you by Pet Insurer, Wag! Wellness lets pet parents compare insurance plans from leading companies like Figo and Healthy Paws.

How do I protect my dog from coyote attacks?

Coyote attacks on dogs can be fatal, and such attacks are tragic and easily preventable. Here are several steps you can take to ensure your fur-baby is safe from coyote attacks.

The best way to protect your dog from coyotes is to stop them from entering your yard. Coyotes can only jump about 3 feet high but can scale almost any fence or wall by pushing off with their back legs. For example, coyotes have been seen jumping over 14-foot-high chain-link fences.

You'll also want a fence that's buried around 18 inches into the ground. Coyotes are excellent diggers and can dig under a fence as easily as they can jump over it.

As well as securing your yard, you'll want to secure your trash. Coyotes love digging through trash cans, and the smell of garbage is one of the main things that attract coyotes to homes.

Avoid leaving your trash cans out overnight. Instead, bring them out for collection in the morning. You should also seal your trash in animal-proof containers. You'll find a range of specially designed trash cans on the market that'll stop coyotes from digging through your garbage.

You should also check your yard for any trash and make sure it's as tidy as possible. Old dog treats and dog food left lying around will attract coyotes. Try to remove any long grass or weeds, as rodents may hide in these areas. Rodents are common prey to coyotes and may attract coyotes to the area.

Bring your dog inside

The best way to protect your pup from coyotes is to bring them inside. Dogs who spend most of their time outside are vulnerable, and most coyote attacks occur when a dog is left out overnight.

Bringing your dog indoors during the night will drastically reduce the chances of a coyote attack. It will also mean you don't need to take as many steps to keep coyotes out of your yard.

Some energetic pups love to spend hours roaming around the yard; however, this puts them at risk of coyote attacks. If you let your dog outside, keep an eye on them.

If it's a nice day, sit outside with a book, or stay in a room where you can watch them from the window and rush out if necessary. If you spot a coyote nearby or see your dog acting strangely, you can bring them inside quickly before a coyote can get near your dog.

Getting your dog their core and non-core vaccines will help protect them from developing an infection or condition after a coyote attack.

It's important to bring your dog inside at night, but you'll still have to let them out to go to the bathroom and stretch their legs. Lighting up your yard at night will help protect your dog from coyotes.

Not only will lighting up your yard make it easier to spot coyotes, but coyotes see better in low light and will avoid bright lights when possible. A motion sensor will also alert you if anything comes into your yard.

Brush up on your dog's training

Training your dog to come when called and stay will go a long way toward keeping them safe, whether you're at home or on a walk. Having greater control over your dog's actions stops them from running after a coyote and from showing aggression.

Approximately 500,000 coyotes are killed annually by hunters, which equates to roughly 1,100 a day. Despite such high numbers, the number of coyotes is still on the rise.

Looking for some products to purchase to keep your dog safe from coyotes? Here are a few of the best products on the market for repelling coyotes.

A Coyote Roller is a 4-foot aluminum pole that attaches to the top of a fence. When a coyote or another critter places their paw on the roller, it turns, stopping the coyote from getting a grip.

If you have a small dog, a Coyote Vest could be a life-saver. These somewhat strange-looking doggy jackets act like body armor to protect against coyotes.

Coyote Vests are simple yet effective. They feature a spiked collar and long spikes on the back, which stop wild animals from targeting a small dog's most vulnerable areas. Coyote Vests will either put off a coyote or will give you enough time to come to your dog's aid. They also protect pint-sized pooches from large birds of prey.

Motion sensing lights are perfect for getting the jump on a sneaky coyote. Whenever a coyote comes into your yard, it'll light up like a Christmas tree, alerting you to a coyote's presence. Coyotes don't like sudden bright lights and may leave your yard.

Motion lights are also excellent home protection against intruders and other large animals, like bears, raccoons, and deer.