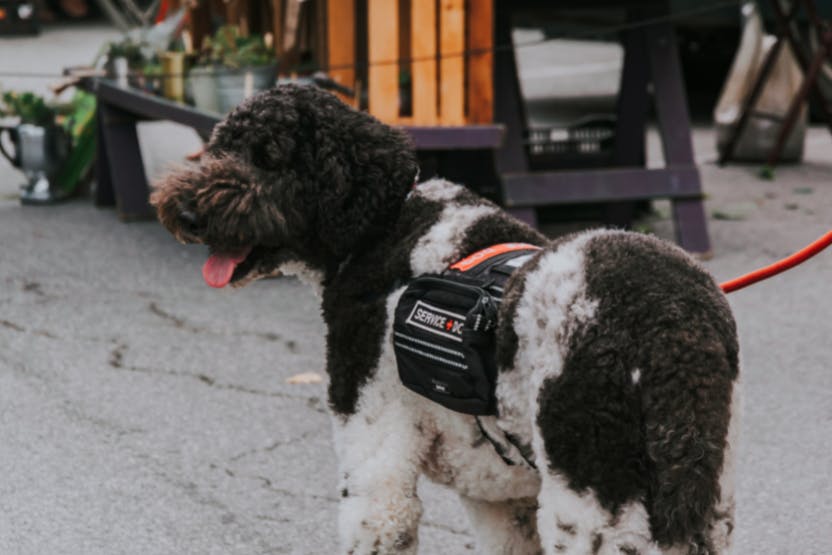 For pet parents, dogs are vital family members. They bring us joy, comfort us when we're down, and entertain us when we're bored. But for people with medical issues, dogs can also be the key to independence.

Service dogs play many different roles, from assisting people with mobility issues to detecting high blood sugar in people with diabetes and seizures in people with epilepsy. These dogs are hardworking and have often gone through years of training to do their job. Service dogs are an integral part of our society and rightfully have many of the same legal rights as people.

So what's the story behind service dogs, and what do they do exactly? Here are 14 eye-opening facts about service dogs and why they're awesome!

The history of service dogs is a long one

It's thought that canine service work dates back to the prehistoric ages when dogs would help nomads hunt for food. Then, as time went on, their functions expanded to herding livestock and guarding crops. Today, we might classify them as "working dogs" instead of service dogs.

Dogs have been helping combat veterans since the Civil War

During the Civil War, dogs were appointed to soldiers and may have been the first documented emotional support animals — though they weren't thought of as such during that time.

Many Civil War dogs served in an emotional capacity, too. According to Civil War Dogs and the Men Who Loved Them, "The morale of the men was always higher in regiments which had pets."

And it showed in the soldiers' letters back home. One letter dating back to 1864 tells the story of one regiment mascot, a Bull Terrier named Harvey, who liked to "sing" and sway along the soldiers' campfire songs.

The first school for guide dogs dates back over 100 years

The first official school for service dogs opened in Germany in 1916. This school was established to teach dogs how to assist combat veterans and the visually impaired. The school system expanded quickly throughout the nation.

The school's founder, Dr. Gerhard Stalling, closed its doors after 10 years because its services couldn't keep up with the need. Although the school no longer served the community, his idea set in motion a series of new service dog training schools worldwide.

Related: A Day in the Life of a Therapy Dog

One of the most famous service dogs was a presidential pup

One of the most well-known service dogs of modern times is Sully, George H. W. Bush's service dog. This beautiful yellow Lab served the former president during his battle with dementia. Sully was trained to help the former president with activities of daily living like turning on lights, retrieving items he needed, answering the phone, and calling for help in emergencies.

When President Bush passed away and Sully's time serving him was done, mourners watched as Sully laid beside the president's casket at his funeral. Sully now has a new job helping veterans at Walter Reed National Military Medical Center. In June 2022, he was promoted to Chief Petty Officer.

Service dogs weren't federally recognized in our country until the '90s

Service dogs weren't legitimized in our country until the American Disabilities Act (ADA) of 1990. This groundbreaking law opened up a world of possibilities for people with disabilities. The ADA permits registered service dogs to assist their handler in any building that their handler is allowed, including housing that doesn't allow pets.

This law also states that the handler and dog may not be isolated, denied service, or treated differently from any other patron. Today, the ADA is still in place, helping people with disabilities find independence with a little help from their furry companions.

Each service dog undergoes specific training to assist with their handler's particular disability, so their functions can vary considerably depending on the person's needs. Below are just a few of the tasks service animals can be trained to do:

The law defines service dogs as working animals, not pets

Service dogs are not legally obligated to wear vests, backpacks, or labeled harnesses, though many handlers prefer to use them.

Service dogs come in all shapes and sizes

No matter how tiny or big, any breed of dog can become a service dog with proper training and temperament. This rule has one exception: certain states with breed-specific legislation refuse to accept Pit Bulls as service animals.

Service dogs may act distinctly different when on and off duty

Service dogs love to play and be silly when they are off duty but take their jobs very seriously when they're working. They're still dogs after all!

There's a reason they ignore strangers

Service dogs receive training to ignore commands and contact from people other than their handlers. That's just one reason why it's so important not to pet a service dog, which leads us to our next service dog fun fact.

In most states, interfering with a service dog's work or attempting to harm them is a misdemeanor. This crime is punishable by hefty fines and jail time — and, if convicted, offenders may be subject to restitution, vet bills, and replacement fees.

It takes months and even years for some dogs to be ready for service, and not all dogs make the cut. The service dogs you see are hardworking individuals that have put a lot of time and effort into their job.

Due to the level of skills needed, training a service dog can get mega expensive, with some handlers forking out $25,000 or more on training services. And service dogs themselves don't come cheap, either — a fully trained service dog will set you back at least $15,000!

Financial aid is available for people with disabilities who are in need of a service animal. For more information, check out our guide on how to get a service dog.

Do you have a beloved service dog? Tell us about them in the comments below (bonus points if you drop a cute pic!). Or, share a snap with us on IG. Be sure to tag #wagwalking or @wag on Instagram for a chance to be featured on our feed!