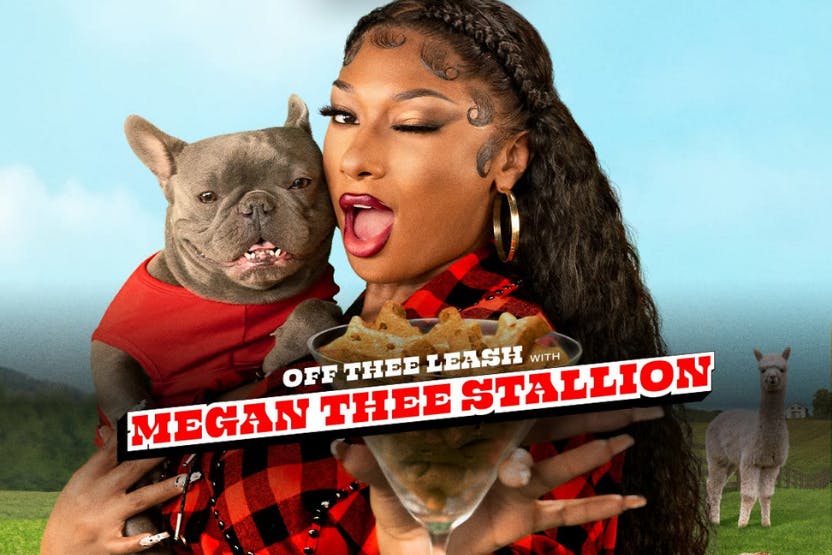 Snapchat’s hot new show “Off Thee Leash with Megan Thee Stallion” dropped on February 19th. And y’all, we are obsessed.

In this Snap Original, Thee H-Town Hottie welcomes celeb guests (and their pets) to her Hot Girl Ranch to unwind and play some fun games.

“Off Thee Leash” appeals to animal lovers of all kinds — 2 guests are proud turtle parents, and the Hot Girl Ranch is also home to alpacas and horses.

As if you needed another excuse to binge wholesome animal content, here are 5 more reasons why you should stop what you’re doing and subscribe to “Off Thee Leash with Megan Thee Stallion” on Snapchat right meow!

Start your day on a “pawsitive” note

Whether you’re scrolling through #petsofsnapchat or trying out a new filter on your fur-baby, Snapchat is the “pawfect” place for cute animal content. And “Off Thee Leash” takes “cute” to a whole new level.

Prepare to be inspired by the show’s fun challenges, including a pet-friendly prom and beach obstacle course. Fun fact: Both activities are a “grrreat” way to give pets (and people!) the physical and mental stimulation they need.

By the end of the first episode, you’ll be itching to whip up some cocktails and host your own pet party. Don’t “furget” the dog wine!

Behind the scenes of Megan’s off-thee-leash antics is prolific production company Westbrook Media, founded by Will and Jada Pinkett Smith in 2019.

From the long-awaited Fresh Prince reboot “Bel-Air” to the Golden Globe-winning “King Richard”, Westbrook Media has produced a laundry list of groundbreaking projects in just a couple of years.

Westbrook’s first Snapchat Original series, “Will From Home”, is also Snapchat’s most successful. Which means Megan and her fur-babies are in good paws!

Enjoy the adorable relationship between Megan and her pets

“As y’all all know, I am one of the best dog moms ever, on the planet."

4oe’s bold personality took front and center stage in the first episode. Megan commented he was a “little old man” who looks like a “gray bunny if a bunny lifted weights.”

We’re already head over paws in love with 4oe, and we can’t wait to meet X, Six, and the rest of the four-legged residents of the Hot Girl Ranch!

The reality TV star brought along her scaly son, Speedy Richie-Madden, but revealed that she and spouse Joel Madden also have dogs, cats, chickens, and turtles.

While Megan was a little scared of Speedy at first, she later said Nicole inspired her to welcome an iguana named Billiam to her growing animal family.

We don’t want to spoil the rest of the fun for you, so tune in to the first episode below. Don’t forget to subscribe on Snapchat to catch future episodes starring Taraji P. Henson, Normani, and other celeb guests!

Get inspired to pamper your pets like the celebrities

Prada hats, Dolce and Gabbana bags, lazy days by the pool — these are just a few ways Hot Girl Ranch guest Bebe Rexha spoils her fur-baby, Bear. Since being adopted by Bebe in 2016, Bear has amassed 70,000+ followers on her very own Instagram account, @bear_rexha.

The “Sacrifice” singer isn’t the only Hottie Ranch guest whose pet is Insta famous. Taraji P. Henson also maintained an Instagram profile for her French Bulldog, K-Ball, who tragically crossed the rainbow bridge in 2021.

"I gave you the best three years ever. Private jets vacations shopping movie sets photo shoots the best dog food money could buy and ALL OF MY LOVE!!!"

While most of us can’t whisk our pets away on a private jet at the drop of a bone, Taraji’s bond with K-Ball goes to show that celeb pet parents aren’t so different from us after all. We all love our pets like family, and we want to spoil them with the best experiences life has to offer.

So pampering your pet like a celeb doesn’t have to involve private jets or designer duds — all you need is love!

Subscribe to “Off Thee Leash with Megan Thee Stallion” on Snapchat

New episodes of “Off Thee Leash” drop every week — #OpenYourSnapchat and subscribe so you don’t miss an episode!