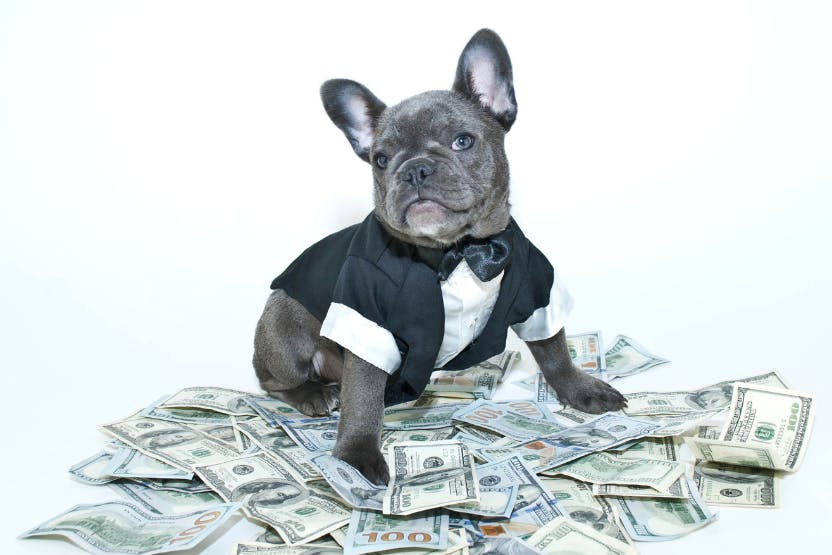 Louis Vuitton dog carriers, Gucci sweaters, collars made of pearls — celebrity pets are truly living in the lap of luxury! But apart from the designer duds, celebrity pets (and their people) are a lot like us. Read on for an inside look at the luxe lives of our favorite celebrity pet parents.

Plus, Megan's taking her pack to the big screen in her new show, "Off Thee Leash with Megan Thee Stallion", where she’ll be linking up with famous friends for some Hot Girl hijinks. The show premiered on Snapchat Originals on February 19.

Actress, comedian, and rapper Awkwafina has been making big waves recently and, in 2021, became a pet parent to a new canine companion. The Raya star made headlines after adopting Haeng-Un, a 3-year-old pint-sized pup rescued from South Korea with the help of NYC-based non-profit Korean K9 Rescue. Learn more about this heartwarming rescue in Awkwafina's Instagram story.

Awkwafina also has a multi-talented cat named Gus. This clever kitty has mastered several tricks, including "give paw" and "sit". He can even go pee in the toilet!

It'll come as no surprise that Snoop Dogg has his own dogg pack. Tha Doggfather is a pet parent to a staggering 11 dogs, as well as 2 Siamese cats called Frank Sinatra and Miles Davis. Many of Snoop's dogs are Bulldog mixes, including French Bulldogg Juelz, who has his own Insta with around 60k followers.

If that wasn't enough, Snoop has a "steak" in several vegan food companies, including Beyond Meat, and hosted the 2022 Puppy Bowl alongside long-time friend Martha Stewart. (And who could forget his iconic Super Bowl halftime performance with Dr. Dre?!)

Fashionista and TV personality Nicole Richie has stayed out of the limelight in recent years, focusing on living her best life. But she recently teased a return to reality television. We can't wait to see what The Simple Life star has up her sleeve!

Nicole has had many pets, including 7 chickens and a bearded dragon named Speedy. She currently has 2 German Shepherds, who she regularly walks with her husband and Good Charlotte lead vocalist, Joel Madden. For more cute pup (and chicken!) pics, check out Nicole's Instagram feed.

There's no more famous pet parent than Joe Biden. The President and First Lady set the "ultimutt" example by being loving pet parents to several canines and felines. They're especially fond of German Shepherds, moving into the White House with 2 pups, Champ and Major. Major is famous for being the first shelter dog to live in the White House.

Sadly, Champ passed away in June 2021. The Bidens picked up another German Shepherd just in time for Christmas called Commander. They also added an adorable feline to the first family in January called Willow.

Actress and pet activist Olivia Munn is well known for her love of dogs. When she's not playing a superhero or battling Predator on the silver screen, Olivia can be found fighting the fur industry or raising awareness about pet mental health.

Olivia is also an ambassador for the Shelter Pet Project and a Creative Strategist with Wag!. She has 2 rescue dogs: a Terrier mix named Frankie and a Cavalier King Charles Spaniel mix named Sir Chancelot (AKA Chance). Follow Olivia on Instagram to keep up with her two- and four-legged family members!

Ed Sheeran might be one of the most popular singer-songwriters on the planet, but his cats have some claims to fame of their own. Ed has 2 cats named Calippo and Dorito, known collectively as "The Wibbles".

The Wibbles have their own Insta account with close to 300k followers! The feline friends have hilarious "purrsonalities," and it's easy to see why they've amassed a huge following on social media.

You won't find many celebrities who unconditionally love animals like Kaley Cuoco. The Big Bang Theory star owns a farm in Coachella Valley that's home to a pack of dogs, around 25 horses, and even a goat named Tarantula.

Kaley is constantly fostering dogs and is a big fan of Pit Bulls. She's even attended local awareness events like Stand Up for Pit Bulls. In fact, Kaley has been known to adopt dogs that would struggle to find a home. For example, in 2021, she adopted a sweet 9-year-old Mastiff named Larry.

Kaley loves dogs so much, she even named her production company after her late four-legged son, Norman. (Her current Instagram profile photo is a drawing of Norman, which is also the production company's logo.)

Nick and Priyanka are doting pet parents, and there's a bit of unspoken rivalry between the fur-babies. Each doggo has their own Insta, and there's competition over who's the most famous. It seems Team Gino is currently winning, with close to 300k followers.

Chrissy Teigen and John Legend are couple goals in more ways than one. They're doting pet parents to 4 dogs, 2 birds, a hamster, and a bearded dragon. All their dogs have alliterative names: a Poodle named Petey, a Basset Hound named Pearl, a three-legged Frenchie named Penny, and a mixed breed named Pebbles.

The newest addition to their furry family is Pebbles, who has the adorable job of keeping daughter Luna safe from bed monsters. Pebbles seems to be doing a top job, as there have been no reports of bed monsters since Pebbles's arrival.

Chrissy's Instagram feed is packed with puppy pics and family photos, plus some sweet eats that you'll want to try your paw at making!

With so many celebrity pet parents out there, it was hard to narrow this list down to just 10! Who are your favorite celebrity pets? Share your thoughts with us in the comments or on Twitter @wagwalking!