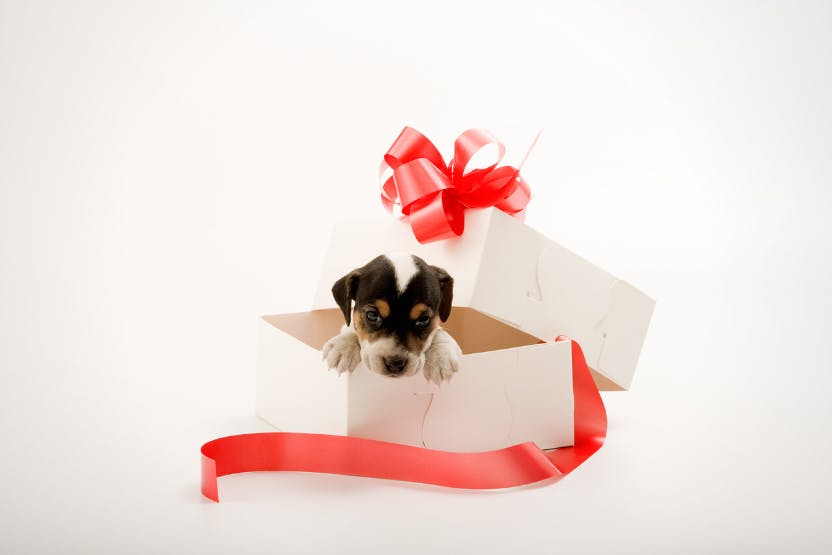 Keep the tissues on standby for these videos of people getting surprised by puppies and kittens! From adorable kiddos being surprised by a fur-baby to animal shelter volunteers being given their favorite shelter pup, we've rounded up 9 of the most heartwarming pet surprise reaction clips.

Remember, if you plan to give someone a pet as a gift, ensure the recipient wants a pet and has time to care for a fur-baby. Adopt from your local shelter where possible!

This incredibly sweet clip of an elderly lady receiving an older black cat for Christmas will surely bring a tear to your eye. The kitty, named Jack, initially frightens the lady when he paws at her after she opens the lid, but they quickly become the best of friends!

The Dodo is known for sharing videos that'll get you in your feels, and this clip of a guy giving his girlfriend a new puppy for her birthday is no exception. Some people aren't ready for a new pet after their last fur-baby passes away, but this girl's reaction suggests a new puppy was the best birthday present ever.

Another tear-jerker from The Dodo, this clip shows the joys of adopting a shelter dog. Two young girls found Rosie, a middle-aged Labrador, on a shelter adoption site, which said that Rosie would be euthanized unless she found a forever home.

The girls were devastated when they next checked the site and saw Rosie was no longer available, fearing she had crossed the rainbow bridge. But their mom had other plans — she had secretly adopted Rosie as a surprise!

Shelter dog realizes he's been adopted by We Love Animals

This clip flips the script and shows the surprise and excitement of a shelter dog that's getting adopted. The dog, named Benny, is initially confused, but as soon as he realizes what's happening, he starts literally jumping for joy. It's a sweet video that illustrates that adopting from a shelter isn't just rewarding for the pet parent but the dog, too.

An emotional video of a family giving their dad a surprise early Christmas present is sure to warm your heart. They start by giving the dad, Robbin, a stuffed toy of a Rottweiler puppy, his favorite breed. Then they surprise him by bringing out a real-life Rottweiler puppy named Blade for him to love.

When Robbin starts crying, one of his family members says they've only seen him cry three times, making this a truly special moment.

While working at the Humane Society of Stillwater, Lance Fuqua's daughter, Halee, fell in love with a dog named Rambo. So, here dad decided to adopt Rambo and surprise Halee as an early Christmas gift. Just try not to well up when you see Halee's uncontrollable tears of joy as she sees Rambo for the first time!

An oldie but a goodie, this clip from over a decade ago shows a grandmother receiving a Yorkshire Terrier as a surprise present. The video starts with her getting presents that hint at the main gift, but she's still oblivious during the final reveal. Shock turns to tears, and it's a really heartwarming family moment as the grandmother is left speechless.

This clip of an excited husband receiving a kitten as a surprise is one of the few pet surprise videos without tears. Twenty-three-year-old Ivan is surprised with a cute grey kitten for his birthday and can't hold back his excitement. You can bet that Ivan's excited yelling and shocked expression will put a smile on your face.

When this girl's boyfriend brings home a 2-year-old shelter dog as a Christmas present, she immediately breaks down crying. From his collar to his shy personality, this girl immediately loves everything about her new doggo. She's even coincidentally wearing a sweater from the shelter where he was adopted.

Did we miss a classic clip of people getting surprised with puppies and kittens? Share it with us in the comments or on Instagram @wag!