How to Protect Your Dog from Venomous Spiders 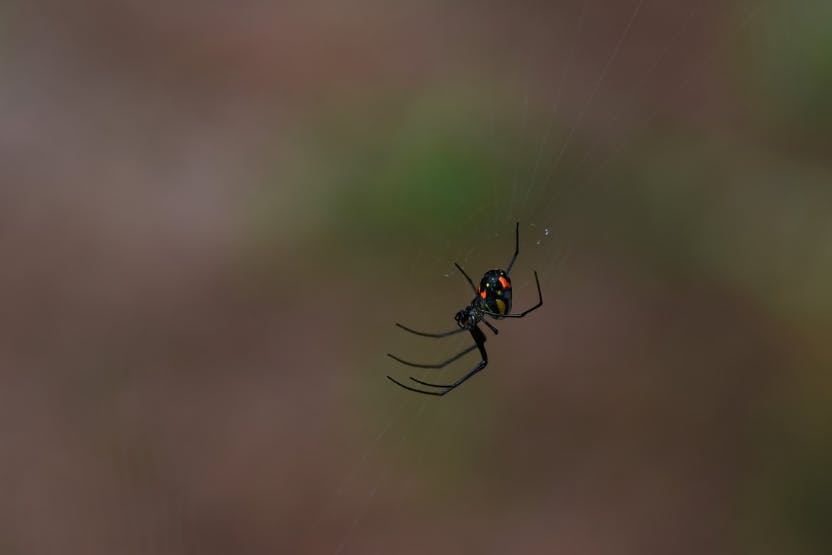 There are more than 3,000 species of spiders native to the US. While most of these spiders are no threat to canines, a handful of native spider species pack a big (and dangerous) bite.

Making your home less accommodating to spiders and learning how to distinguish a harmless spider from a venomous one can help you protect your pets. Let's discuss common spider hiding places, ways to prevent spiders in the home, and how to identify dangerous spider species.

How to protect your dog from venomous spiders

Below are some protective measures you can take to safeguard your pet (and yourself) against venomous spiders.

Keep the porch light off at night

Unlike moths and beetles, spiders aren't drawn to light, though they are drawn to the prey that lights can lure in. A bright porch light can make for easy hunting — that's why spiders tend to gravitate to lighted areas at night. To prevent unwanted visitors, we suggest only turning on your porch light when you need it.

Linens and old clothes make a great hiding spot for reclusive spiders, especially when they're seldom used or stored in dark closets. Be sure to give your pet's bed and blankets a good shake when getting them out of storage.

Seal small openings around the house

Spiders and bugs often find their way inside the home through small cracks and crevices. Use a caulking gun to fill small holes and gaps. For larger holes, you may want to install a mesh barrier or have a professional handle it.

Wood piles are a favorite habitat for spiders, so we suggest storing them well away from the house. Let Fido know that the area around the wood pile is off-limits, and use caution when bringing logs into the house.

Remove excess clutter around your house and yard

Spiders gravitate to areas of the home and yard with heavy clutter. Spiders like clutter because it offers them the perfect hiding place to spin their web. Cardboard boxes are especially appealing to these 8-legged creatures since the texture of this material closely resembles decaying bark. Get rid of potential spider hiding spots by recycling cardboard boxes and decluttering areas around your home or yard.

It's not unusual for spiders to make their homes under or inside dog houses. Dog houses make a perfect home for spiders since they are dry, stationary, and offer protection from predators. Regularly check dog houses for venomous spiders as well as other dangerous insects like fire ants.

Leaves serve as a natural cover for spiders. Unfortunately, leaves can also be appealing for dogs to play or lay in, which can put them at risk for spider bites. When leaves start falling, be sure to rake them up and dispose of them.

Vinegar is a great natural spider repellent that won't harm your fur-babies. Spray a vinegar solution around the perimeter of your home to keep the creepy crawlies at bay. Alternatively, you can spread cedar shavings around the exterior of your home. Not only does cedar smell great, but it's also safe for pets.

Types of venomous spiders native to the US

Dogs' keen sense of smell can help them sense spiders, though this isn't always for the best — dogs may play with or even eat venomous spiders. For this reason, you should familiarize yourself with the identifying features and habits of native venomous spiders. Below are the venomous spiders you may encounter in the US.

Brown recluses (also known as fiddle back spiders) are a venomous spider that belongs to the Sicariidae family of arachnids. As their name suggests, brown recluses are a reclusive species and usually only leave their web at night.

Rather than using their web to trap their prey, brown recluses leave their webs to search for food. Unlike solitary spiders, brown recluses tend to congregate with their own kind. It’s not unusual to find several in a small area.

Brown recluses won't go out of their way to bite humans or dogs, and most bites result from people or animals pressing against the spider.

Brown recluses predominately live in the southern portion of central US from western Georgia, north to Kentucky, and south through Texas. Brown recluses gravitate to human-made structures like homes, sheds, porches, and barns.

This species particularly likes dark, well-hidden areas with low humidity. Some of the more common places people find brown recluses are in old shoes, cardboard boxes, within folded linens, and under woodpiles.

How to identify a brown recluse

Brown recluses are tan to dark brown with no markings on the abdomen or legs. The only possible marking on brown recluses is a violin-shaped pattern on their cephalothorax (the head and thorax), though not all brown recluses have this marking.

A more effective way to identify this species is by its eyes. This species has three clusters of two eyes rather than 8 eyes like most spiders.

Signs of a brown recluse bite

Brown recluse spider bite poisoning in dogs is a serious condition that can cost dogs their lives or limbs. Since their venom is hemotoxic, bites from brown recluses can destroy skin tissue and lead to infection. What's more, these infections can spread to the bloodstream and vital organs, which can be life-threatening.

Early intervention is key to a good prognosis in dogs with brown recluse bites. Treatment for brown recluse bites depends on the severity of the bite. Some dogs only need basic wound care, whereas others may need blood transfusions and skin grafts to combat tissue necrosis. If infection sets in, antibiotics and corticosteroids may be necessary.

The average cost of vet treatment

Treatment for a brown recluse bite can vary substantially depending on the necessary treatments. Typically treatment for these bites ranges from $250 to $6,500.

Venomous spider bites can be expensive to treat.

Black widows are arguably the most feared spider in the US, and rightfully so — it’s thought their bite is 15 times more potent than a rattlesnake's. Female black widows account for most of the sightings of this species since males are very reclusive.

The US is also home to the red widow and brown widow (sometimes called gray widows). These species are also venomous and belong to the Latrodectus family. Red widows are native to Florida, while brown widows are considered an invasive species in California.

In the outdoors, black widows tend to stay close to the ground. They may inhabit holes in the soil, hollow logs, or hide under rocks or piles of debris. Occasionally black widows will make their way into homes, seeking shelter in low-traffic areas like attics and storage rooms.

How to identify a black widow

Black widow spiders have a striking appearance, with bulbous shiny black abdomens and long slender legs. The female black widow's characteristic red hourglass, located on the abdomen, allows for easy identification. Unfortunately, this marking isn’t always present, and there are some variations.

Some female black widows have one or two red triangles rather than an hourglass shape. Likewise, markings may be orange or yellow rather than red.

The male black widow is typically more difficult to identify. Males are much smaller than females and feature red and white stripe-like markings on their undersides. Rather than solid black legs like the female widows, male widows' legs are lighter at the joints. Young female western black widows have a similar coloration to males before shedding their exoskeleton.

Signs of a black widow bite

Black widow spider bite poisoning in dogs can be deadly if left untreated. The venom of a black widow is neurotoxic and wreaks havoc on the nerve endings, causing excruciating pain and eventually paralysis.

The paralytic effects affect not only the limbs but the respiratory system too, which can lead to trouble breathing and death. Puppies, elderly dogs, and dogs with hypertension are at the greatest risk of dying from a black widow spider bite.

Black widow antivenom is very effective at managing black widow toxicity, though this treatment is costly and may be unavailable in some areas. Recovery is possible without the use of antivenom, but it often requires lots of supportive care.

Vets will typically administer IV muscle relaxants and pain medication to combat the muscle spasms and manage pain levels. Dogs may also require oxygen if the respiratory system is affected. With prompt treatment, the survival rate for a black widow bite is good, though it can take several weeks for dogs to make a full recovery.

The average cost of vet treatment

A note on hobo spiders

A third, possibly venomous spider is the hobo spider of the Pacific Northwest. Hobo spiders (Eratigena agrestis) are a type of venomous funnel-web weaving spider. This species is often mistaken as aggressive. However, hobo spiders rarely bite, and even when they do, they often don't release any venom.

Hobo spiders have a relatively small range compared to the other spiders on this list, inhabiting Washington, Oregon, Idaho, and Utah. Hobo spiders spend most of their time outside, though they tend to move indoors to find mates during the autumn months. In nature, this species gravitates to dry crevices like under rocks or wood piles.

Hobo spiders do NOT have:

Unfortunately, there's a lot of conflicting data on whether or not a hobo spider bite is venomous. There are reports of possible hobo spider bites causing necrotizing wounds; however, many of these reports remain unverified. The study data on hobo spiders is also inconclusive, and none of the studies have been published.

Another group of scientists tried to replicate this study by injecting the venom of male and female hobo spiders into rabbits. The participants in this study did not exhibit necrotizing wounds.

More research is necessary to determine if hobo spiders are indeed a threat to human and animal life. If a hobo spider bites your dog, we suggest taking them to the vet just in case.

As you can see, spider poisoning in dogs is a serious condition that can be life-threatening if untreated. Unfortunately, the high vet costs associated with spider bite poisoning can leave pet parents unsure of how they will be able to afford treatment for their pet.

Pet health insurance can help pet parents pay for life-saving treatments for accidents and injuries such as spider bites. If you're on the fence about pet insurance, check out our pet insurance comparison tool, which will help you find the "pawfect" plan for Fido.